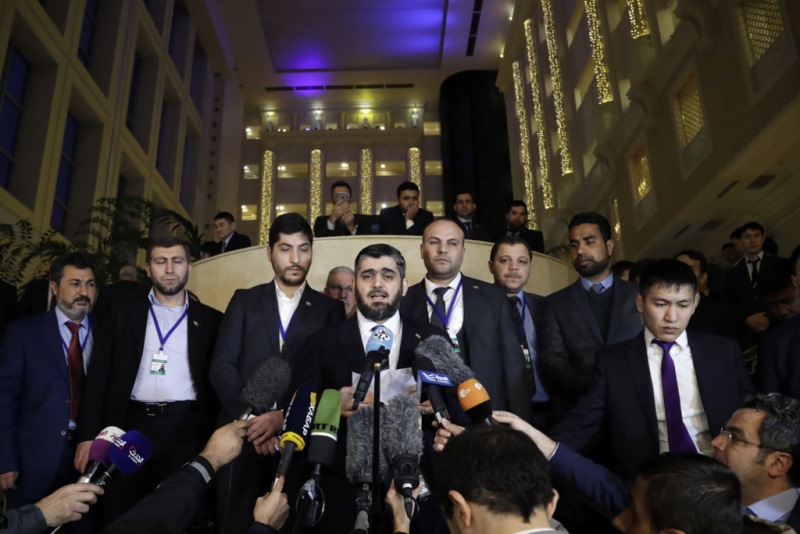 The vastness of the areas from where the Sham revolution has emerged had left Assad’s criminal regime in a state of bafflement, not knowing how to defend itself or prevent its inevitable downfall. The revolution, which has come out from Mosques in the main cities as well as villages in the countryside, came out demanding the overthrow of the regime which soon chose the weapon to confront it (the revolution), forcing it to defend itself. And once a year has passed from the start of the revolution, the control of the criminal regime became limited to only a quarter of the area of Ash-Sham.

This happened when the people of Ash-Sham did not know the rival factions, nor the linked leaders, nor the poisoned dollars, nor the truces and the negotiations. The days when the elements and officers of the regime’s army defected rejecting humiliation, disgrace and obedience to those who ordered them to kill their children and their families. So, the revolution was strong by its Lord, firm by its self-reliance from the supporters, pure from the fatwas of the legitimate ones, and does not know the red lines or any other, marching in steady steps confident in its Lord towards overthrowing the regime.

Perhaps the plotting of the enemies against the people of Ash-Sham is no longer a secret to anyone, whether it is from the countries that claimed friendship, or those who declared their enmity. But the observer finds another kind of enemies; those who provided services to the criminal regime, and behind it America, and the international community, whether they did it in good faith or ill-intentioned. They knew it or they were ignorant; those who have led the revolution politically or militarily, they led it to disasters and granted the enemy more than what he wished. Despite all the support with men and weapons that the regime received, it would not have been able to catch his breath again and again if it had not been for the fighting between the factions of the revolution over the past seven years, who had been primarily driven by supporting states, leaders disagreement over power, influence, money or others, which Hizb ut Tahrir had always warned of and of its catastrophic consequences. And the regime was not able to isolate and displace Homs, Daria, Zabadani, Madaya, Aleppo, Ghouta and others, had it not been for the leaders of factions accepting the truces and participating in conferences sponsored by countries that support the regime and turn a blind eye to its criminality to emerge from these conferences decisions to reduce the escalation from one side only, which also Hizb ut Tahrir, the pioneer that does not lie to its people, had warned of them but its warning was met with mockery and ridicule at times and was challenged and questioned at others!!

Yes, the faction leaders provided great services to the criminal Assad regime, who would not have dreamed of it without the absence of political awareness that became apparent on them, which made them accept the dirty political money that forced them to remain scattered, rather, fighting each other from time to time. Not only that, but this money has made them tools in the hands of their supporters and pawns who they move wherever their interests are. And again, the warning of Hizb ut Tahrir of this poisoned money was met with ridicule and mockery!!

The criminal regime was able to take Homs at the beginning to separate the north from the south, and then to take Aleppo, after which it removed the danger from the vicinity of Damascus by displacing the cities of the countryside, such as Wadi Barada, Darya and Barza, and finally Eastern Ghouta. All of which was clearly plotted by the International Community with its states and organizations, and the faction leaders who have abandoned their people and their revolution and surrendered their constants. So, it is rightful for the tyrant of Ash-Sham to raise his hat in tribute and appreciation to the leaders of the factions and the legislators of their actions on this grace that they gave him, and this disgrace that they offered to the people of Ash-Sham and their revolution. And it is rightful for the people of Ash-Sham to discard them the way they discard seeds, and to put this orphan revolution in the hands of those who fear Allah, and carry the project of Islam to implement it; thus, they give the political leadership to Hizb ut Tahrir for the project of the Khilafah Rashidah (righteous Caliphate), and they return to the revolution its brilliance, and it returns to be “for the sake of Allah”. So that it will pounce upon Assad’s regime and topple it and establish the rule of Islam on its ruins; Khilafah Rashidah on the method of the Prophethood. Allah (swt) says:

“O you who have believed, respond to Allah and to the Messenger when he calls you to that which gives you life. And know that Allah intervenes between a man and his heart and that to Him you will be gathered.” [Al-Anfaal: 24]