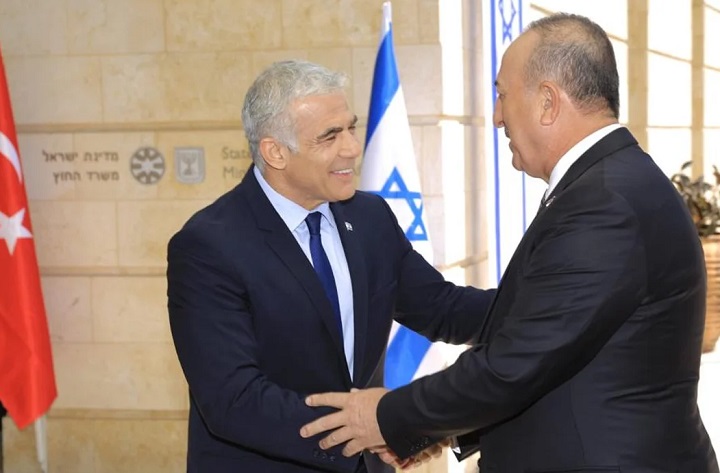 Turkish Foreign Minister Mevlüt Çavuşoğlu paid a visit to the Jewish entity today, Wednesday, in which he met the foreign minister of the entity. He also held a bilateral meeting at the delegation level to discuss bilateral relations and regional and global issues.

In a deplorable visit, Davutoglu visited Al-Aqsa Mosque captive under the bayonets of the occupation, instead of entering it with the Turkish army, the descendants of the Ottomans and the protectors of Al-Aqsa, liberators with the Takbeer!

This visit comes in light of the daily abuse and the increasing criminality of the Jewish entity, and its shedding of the blood of the people of Palestine that has yet to dry and in which Jews do not differentiate between men and women, nor between the elderly and children. Davutoglu comes at the height of abuse, house demolitions, arrests, violating sanctities, and intrusion. And the flags’ marches, and thus the Turkish regime’s march is proceeding towards humiliating normalization, like the rest of the traitorous regimes to Allah, His Messenger and Muslims. This rejected visit expresses the reality of the conspiratorial Turkish regime, and it does not differ from its dirty role in Syria, through which the enemy of Allah, Bashar and his criminal regime, were installed. Has Erdogan’s Turkey become a tool in the hands of the enemies of Islam through which they implement what they are unable to implement with their own hands?!

Regarding this sinful visit, we affirm the following:

First: The hasty normalization with the Jewish entity in this shameful way on the part of the rulers of Turkey and the treacherous regimes in light of the criminal acts carried out by the Jewish entity, is a form of aggression, conspiracy and incitement against Palestine and its people and its sanctities, and a temptation for the Jewish entity to do more, and it is a message that gives it the green light to continue its crimes.

So these servile regimes rushed towards normalization with the Jewish entity while they were deliberately killing and displacing the people of the blessed land, demolishing homes and desecrating the Al-Aqsa Mosque on a daily basis, which is a betrayal that is followed by betrayal.

Second: This shameful normalization, if it indicates anything, indicates that these regimes are completely detached from the Ummah, and they are not of its kind at all. At a time when the Ummah is looking forward to getting rid of this entity, and has come to feel the reality of its fragility and the imminence of its demise, these regimes come to provide it with some strength through their sinful relations with it, and at a time when the Ummah sees its interest in its demise, these regimes see their interests, security, trade and survival in its existence and the relationship with it, in complete contradiction with the interest of the Ummah and what it requires.

Third: Building relations between Turkey and the Jewish entity on the basis of the alleged common interests means preserving those interests, i.e. preserving the Jewish entity and its permanence, and providing it with the means of life and survival. At the same time, they connect their demise with its demise, and they do not elicit by their betrayal except the wrath of Allah and manifest loss!

Fourth: The worshipers in the Al-Aqsa Mosque have made their voices heard about their denial of his humiliating visit. They have made him hear that the Al-Aqsa Mosque does not receive the impostors and the delinquent, but rather the Mujahideen and the conquerors. They heard their call to the Mujahideen in the Turkish army to carry out their duty towards the place where the Messenger of Allah (SAW), had the night journey. Will he pass on this message to the Turkish army as pure as he heard it?! Will the Turkish media convey this message to the Muslims in Turkey?!

Fifth: In a shameful move, Foreign Minister Mevlutoglu laid a wreath at the torch monument in honor of the murdered Jews! But what about his position on the Muslim martyrs who were killed by the Jewish entity?! Do these martyrs not mobilize the Muslim armies to wage jihad for the sake of Allah and uproot the Jewish entity from its roots?!

What we see of the humiliating normalization of the existing regimes in the Muslim countries, and the betrayal of the Ummah and its issues, and the humiliation in front of its enemies and their taking as allies, is a natural result of the existence of those secular regimes after the demolition of the Khilafah (Caliphate) that preserved and protected Palestine as it preserves the organ from the body. And if Oglu represents Turkey’s secular regime when it comes to Palestine humiliated under the occupation’s spears, betrays it and impresses it, the Muslims in Turkey and the Turkish army yearn for pride and glory positions, yearning for jihad in the way of Allah and the liberation of Al-Aqsa Mosque, like Corporal Hasan Igdir the last soldier guardian of the Ottoman military garrison who died stationed, maintaining his duty in the Al-Aqsa Mosque, and this represents the difference between the artificial secular states and the Khilafah State, which will soon exist, Allah willing, to remove the normalization regimes, remove the fragile Jewish entity and relieve the world from its evils.

“O believers! Take neither Jews nor Christians as guardians—they are guardians of each other.1 Whoever does so will be counted as one of them. Surely Allah does not guide the wrongdoing people. You see those with sickness in their hearts racing for their guardianship, saying ˹in justification˺, “We fear a turn of fortune will strike us.” But perhaps Allah will bring about ˹your˺ victory or another favour by His command, and they will regret what they have hidden in their hearts.” [TMQ Al-Ma‘ida: 51-52].