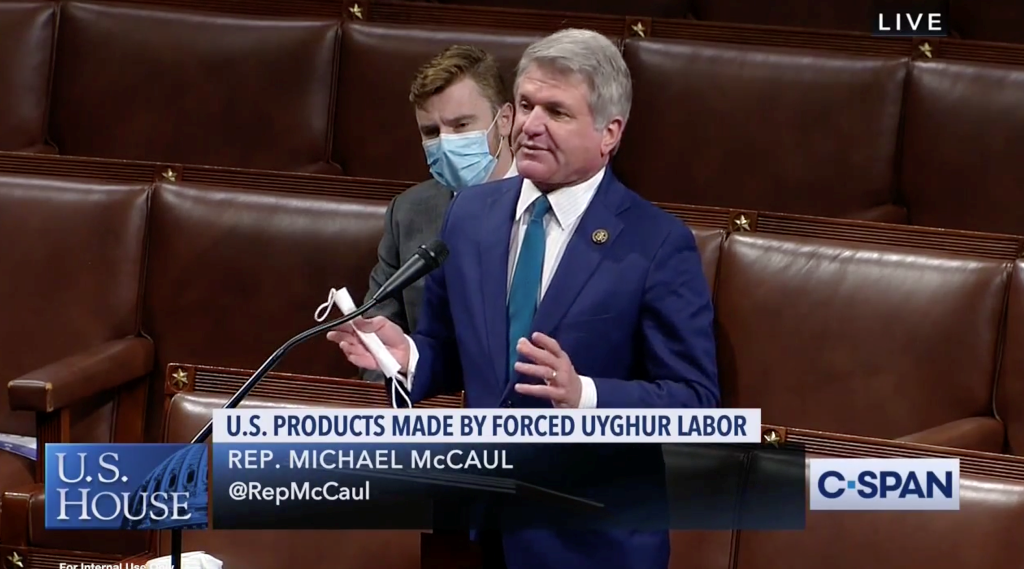 By now, the horrors that the Uyghur Muslims are facing in China are common knowledge; torture, sterilization of Uyghur women, forced separation and forced labour. Regarding forced labour, the US has introduced a series of bills, the most recent one is entitled “the Uyghur Forced Labor Prevention Act.” It is awaiting approval in the Senate, having won a majority in the House of Representatives in September with an overwhelming 406-3 vote. The forced labour bill would prohibit US importers from sourcing any goods originating in Xinjiang unless they could provide conclusive evidence that forced labour was not involved in their production.

In May 2020, Nancy Pelosi, the House Speaker, tried to frame the USA action on the basis of morality when she said, “If America does not speak out for human rights in China because of commercial interest, we lose all moral authority to speak about human rights anywhere in the world.”

Believing that the US stance is borne out of genuine concern for the Uyghur Muslims is naïve. The decision to introduce this bill is entirely self-serving. It garners support of the international community to further the US policy of containing China, limiting its threat as a competitor.

But we can’t forget that the USA doesn’t use morality as the basis of their decisions. Every decision the US makes is based on benefit. It just uses terms like morality and human rights to make its decisions more palatable.

The US is Against Forced Labour, when it Suits

This year, the USA has passed two bills targeting forced labour by focusing on global supply chains. If the third, and most recent Act passes through Senate, it would mean that the US would assume that goods manufactured in Xinjiang with forced labour, unless the commissioner of US Customs and Border Protection says otherwise.

Whilst the bill has garnered support from human rights groups, we can’t ignore the fact that the legislation seems to be focused on China. Most significantly, it’s focused on forced labor in a region that has a lot of economic benefit to China, Xinjiang.

Especially when they have a history of being lax on issues of forced labor. According to a report by the Review Commission in the US, from 2014, the US authorities, “have had a weak record of enforcement, due to the requirement that U.S. law enforcement authorities must acquire credible, first-hand knowledge … that suspected goods are produced with prison, slave, or forced labor in order to prohibit their entry into the United States.”

This makes us wonder what’s behind this current decision. Especially, when it has bipartisan (i.e. both Joe Biden, with the Democrats, and Donald Trump, with the Republicans) support.

The fact that these bills are being pushed through by Donald Trump isn’t a surprise. Over the last four years, his administration has made a lot of decisions that have put it in conflict in China. He’s placed tariffs on products that came from China and constrained Chinese businesses ability to buy American tech, among other things.

The incoming President, Joe Biden, has suggested that he’ll be more careful about starting trade wars with China. However, that doesn’t mean that his administration will not support an anti-Chinese policy. He stated that he would “ensure that labor unions and environment groups were at the table in any trade negotiations and push for the United States, rather than China, to set the world’s trading rules, along with other democracies.” (Source nytimes). Going after China’s human rights violations is a means to an end for the USA, a way to curb China’s influence and destabilize its economy, thus ensuring that the US maintains its status as the world’s leading state.

The Focus on the Xinjiang

Xinjiang is a key part in international corporations’ supply chains. It produces a variety of goods and is central to China’s cotton industry. The production of cotton and textile is still important to China’s economy. China is one of the world’s largest cotton producers, producing about 20% of the world’s cotton. The other major cotton producer is India, with the US, itself, Pakistan, Brazil, Uzbekistan and Turkey following closely behind. Within China, about “84% of Chinese cotton came from Xinjiang” (Source: BBC). These exports help to bolster its GDP.  So, if the US wants to target China’s economy, as it has been doing quite blatantly over the last four years of Trump – then going after Xinjiang, restricting companies from dealing with the region, is a good way of doing it.

It will reduce Chinese exports and make companies look elsewhere – India is an alternative, and the USA has shown an interest in helping them to develop their economy so that it can act as a US proxy against China and the region’s Muslims. There’s also the fact that getting companies to come home, that is back to the USA, would help to stabilize their economy. This is significant because according to the Worker Rights Consortium, “about 1 in 5 cotton garments sold in the U.S. contain content from the Uighur region.”  All of this explains why both Democrats and the Republicans were willing to put aside their internal conflicts to work together.

They Say it’s the Only Way. It’s Not.

Amidst the news of companies like the unscrupulous Nike, lobbying against the bill, is news of human rights representatives coming forwards, stating that the bill is the only way to stop forced labour in the region. Peter Irwin, senior program officer of the Uyghur Human Rights Project, told Business Insider that Coca-Cola’s stance shows, “they have no idea how to effectively root out forced labour connected to the Uighur region” and “Leaving the Uighur region altogether is the only effective way to ensure you’re within the bounds of the law.” The rights groups claim that until major companies cut all ties with factories and supply chains from Xinjiang, the human rights atrocities will continue.

Putting aside the fact that it’s clear that the US stands to gain all round from the bill, let’s consider the claim.

Do the atrocities in China need to come to an end? Absolutely.

Is the US and its forced labor bill going to bring the atrocities against Muslims to an end? No.

The US, China and other colonialist states are all guilty of atrocities against the Muslims. It’s just a matter of the scale or which issue is being given attention at that specific point in time. But consider this – while the US is targeting forced labour in China, China has been allowed to maintain extensive economic and political relations with states across the world. The US is even discussing a possibility of improving relations with China in the future. If this really was a morality issue, a horrific event that required a swift response, where is the decisive, resolute action? Why is China still backing the US economy by holding its debt and huge dollar reserves? Why is China still apart of the WTO?

We shouldn’t be surprised – The US itself has a history of committing atrocities so why would they take decisive action to stop China from doing the same?

Internally, the Native Americans and the Afro-Americans have a history that’s full of death and slavery because of the USA. Externally, the US started a horrific war with Iraq – just recently pardoning private military contractors that massacred Iraqi men, women and children. The US has launched drones into Afghanistan, creating a situation where the Afghan children fear clear blue skies, which are ideal conditions for drone strikes. They support ‘Israel’ and India who are attacking the Palestinian and Kashmiri Muslims, respectively. The list is much longer but we should understand the issue indepth and from all angles – the attack on China isn’t a response to a human rights issue, and it’s not because of an issue of morality. It’s a means to an end – the USA wants to ensure that they maintain their political and economic power, and going after Xinjiang is a way of doing it.

To solve this problem and bring real change, we must understand that the reality of the Muslims won’t change until the system of ruling in the Muslim World changes, and we re-establish the Islamic State on the method of the Prophethood. Only then will a system exist were the Ruler understands his obligation to act for the protection of Muslims and not for political and economic benefit.

So, while we must acknowledge and raise awareness about the atrocities being committed against Muslims, to solve the problem we must call out for change. This change will only be effective if it is based on the rulings that Allah has given us – in this case, looking at the way that we would treat China, a country that has a history of violating the rights of its citizens, and how Muslims must treat a country abusing their brothers and sisters.

We must realize that it isn’t not allowed to make any permanent treaty with the warring nation, economic, political, military or cultural. The Muslims are only allowed to agree to a temporary ceasefire with such warring states, in the situation where there is a need to make preparations for war, or any other compelling reason. China is such a nation, as is the USA.

“Allah forbids your alliance with those who fight you because of your Deen, and drive you from your homelands, or aid others to do so: and as for those who turn to them in alliance, they are truly oppressors.” [Al-Mumtahina 60:9].