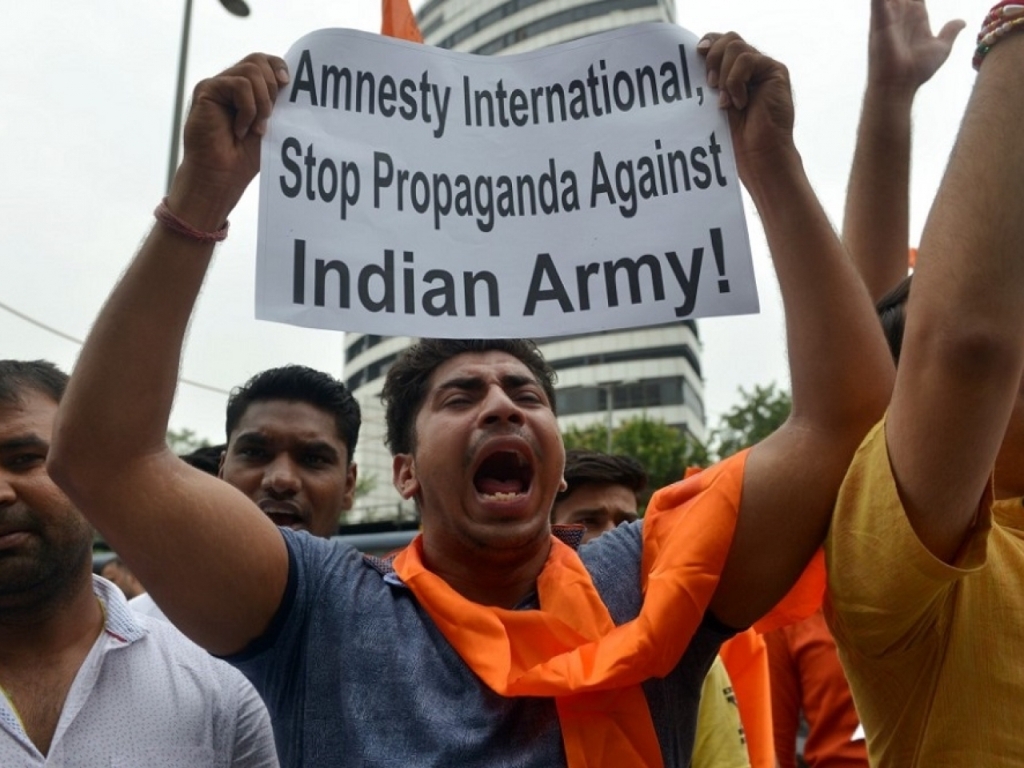 The complete freezing of Bank Accounts of Amnesty International India, by the Government of India, which it came to be known by 10 September 2020, has brought all the work of the organization to a grinding halt. The organization has been compelled to let go off the staff in India and pause all its ongoing campaign and research work.

The Bharatiya Janata Party (BJP) led government has accused Amnesty India of violating laws on foreign funding, under the Foreign Contribution Regulation Act (FCRA), a law broadly condemned for violating international human rights law and standards, to target outspoken groups. The constant harassment by government agencies of India, including the Enforcement Directorate is a result of unequivocal calls for transparency in the government, more recently for accountability of the Delhi police and the Government of India regarding the grave human rights violations in Delhi riots and Jammu and Kashmir.

The hypocrisy of the secular democratic systems in promoting the values of human rights is evident as these systems rarely tolerate them when their own laws are being questioned for violation of human rights. India, the world’s largest democracy is yet an example for this. The BJP government has increasingly cracked down on civil society, harassing and bringing politically motivated cases against human rights defenders, academics, student activists, journalists, and others critical of the government under sedition, terrorism, and other repressive laws.

This exposes the true nature and the root cause of the problem that it lies in the Democratic system itself. This flaw of the Democratic setup needs to be understood so as to identify the real cause without being deceived and to look out for a solution where the actual problem lies, i.e. Democracy. In democracy, the power lies at the hands of people. Consequently, the concept of majority plays an important role in democratic elections i.e. more the support from the people, more the powerful the party is. Having got the majority support from people and being confident in gaining majority in future elections, makes them increasingly mimic that of authoritarian regimes, which do not tolerate any criticism and shamelessly target those who dare to speak out. With growing criticism of the government’s discriminatory policies and attacks on the rule of law, the authorities seem more interested in banning and shouting down the opposing views than addressing the grievances.

However, with respect to Islam, the Khilafah (Caliphate) is free from these flaws that democracy inherently possess. A central theme within Islam is to enjoin the good and forbid the evil and to give sincere advice to people, regardless of whether it be the general masses or the ruler. In the Qur’an, Allah (swt) informs us, كُنتُمْ خَيْرَ أُمَّةٍ أُخْرِجَتْ لِلنَّاسِ تَأْمُرُونَ بِالْمَعْرُوفِ وَتَنْهَوْنَ عَنِ الْمُنْكَرِ وَتُؤْمِنُونَ بِاللَّهِ “You are the best nation raised for mankind, you enjoin the good and forbid the evil and you believe in Allah” [Surah Aal-e Imran 3:110]

The Prophet ﷺ said, «إِنَّ الدِّينَ النَّصِيحَةُ» “Verily, the religion is sincerity (advice).” We said, “To whom?” The Prophet ﷺ said: ل«ِلَّهِ وَكِتَابِهِ وَرَسُولِهِ وَأَئِمَّةِ الْمُسْلِمِينَ وَعَامَّتِهِمْ» “To Allah, His Book, His Messenger, the leaders of the Muslims, and their common people.” (Muslim).

And He ﷺ said: «سيد الشهداء حمزة بن عبد المطلب ورجل قام إلى إمام جائر فأمره ونهاه فقتله» “The master of the martyrs is Hamza ibn Abdul Mattalib, and a man who stands (in front of) an oppressive ruler and enjoins the good and forbids the evil and so is killed for it.” (Hakim)

There are many ways of accounting the Khaleefah within the Islamic State. It varies from the citizens of the State to political parties [Hizb as-siyaasi], right up to the Council of the Ummah [Majlis ash-Shurah] as well as the Court of Unjust Acts [Mah’kamet al-Madhalim]. Ultimately the best of accountability will be to fear Allah (swt) and knowing that we are all answerable to Him (swt). Those with more responsibility should fear Him (swt) more, as they have more to answer for, than those with diminished responsibility.

Imam al-Shafi’i remarked, “There is a verse in the Quran that every wrongdoer should be terrified of.” He was asked, “Which verse is that?” He replied, وَمَا كَانَ رَبُّكَ نَسِيّاً “And your Lord never forgets.” [Surah Maryam 19:64]”