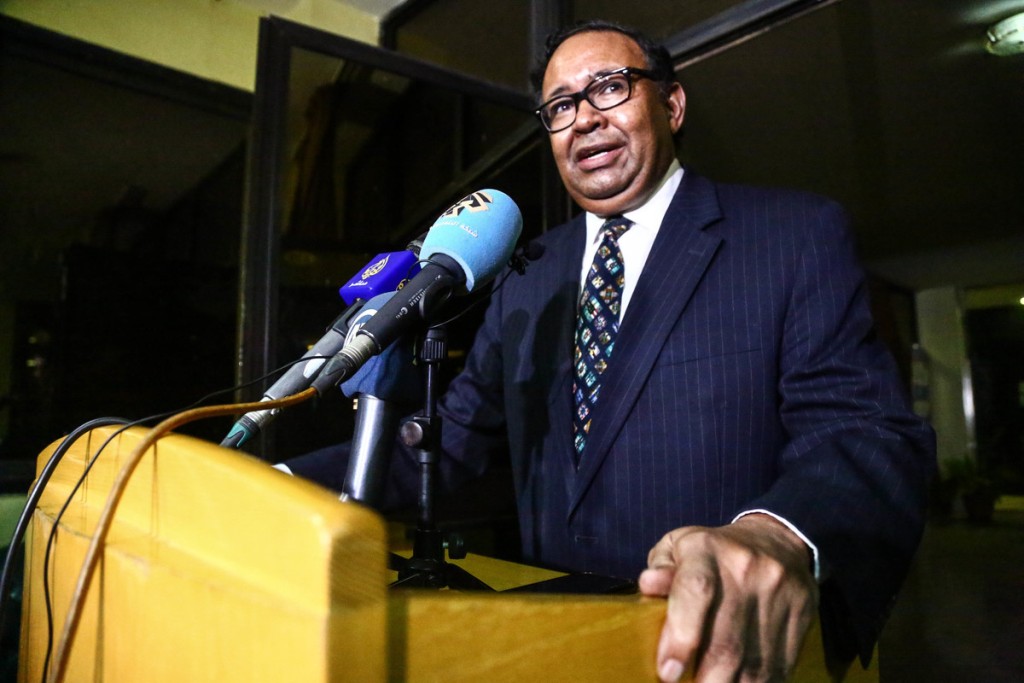 In an article on his account on a website, the Sudanese Foreign Ministry spokesman, Haider Badawi Sadiq, called on the Sudanese people to reconcile with “Israel”, indicating that there are secret arrangements between the two leaderships in Khartoum and Tel Aviv. The spokesman called on the head of the Sovereignty Council and the Prime Minister to respect the people of Sudan, revealing what is going on in secret about the relationship between the two countries. (Al-Sharq Al-Awsat Newspaper 19/8/2020). In its denial, proving what is going on in secret, the Foreign Minister-designate Omar Qamar al-Din said: (“The Ministry of Foreign Affairs received with astonishment the statements of the ministry’s spokesman, stressing that the issue of relations with “Israel” was not discussed in the Ministry of Foreign Affairs in any way, and that Ambassador Haidar Badawi was not assigned to make any statements in this regard.” (Al-Jarida Newspaper 19/8/2020).

Through these two reports, it becomes clear that the negotiations under the table are taking place between the government of Sudan and the Jewish entity that usurped the first of the two Qiblas, and the third of the Two Noble Harams, Masra of the Messenger of Allah ﷺ. This entity that is drowning in the sacred blood of the Muslims, violating the sanctity of our Muslim brothers in the usurped land of Israa and Mi’raj, which was confirmed by the Prime Minister of the Jewish entity; the butcher Netanyahu, on his Twitter page, on which he wrote: [““Israel”, Sudan and the entire region will reap the benefits from the peace agreement with Sudan,” as his Foreign Minister; Gabi Ashkenazi, welcomed it saying: “The Sudanese Foreign Ministry’s announcement indicates a fundamental change, 53 years after the Khartoum No’s Conference in 1967” (Al-Sharq Al-Awsat Newspaper Issue 15240].

We in Hizb ut Tahrir / Wilayah of Sudan wish to clarify to our people the following facts:

First: The Muslim’s view on issues, events, facts and interests is based on the Islamic belief. It is a pure comprehensive Deen. Al-Haq (swt) says: وَمَا كَانَ لِمُؤْمِنٍ وَلَا مُؤْمِنَةٍ إِذَا قَضَى اللَّهُ وَرَسُولُهُ أَمْراً أَنْ يَكُونَ لَهُمُ الْخِيَرَةُ مِنْ أَمْرِهِمْ وَمَنْ يَعْصِ اللَّهَ وَرَسُولَهُ فَقَدْ ضَلَّ ضَلَالاً مُبِيناً “It is not for a believing man or a believing woman, when Allah and His Messenger have decided a matter, that they should [thereafter] have any choice about their affair. And whoever disobeys Allah and His Messenger has certainly strayed into clear error” [Al-Ahzab: 36].

The noble companion Rafi’ bin Khadij said when the Prophet ﷺ forbade the leasing of agricultural land: «نَهَانَا رَسُولُ اللَّهِ ﷺ عَنْ أَمْرٍ كَانَ لَنَا نَافِعاً وَطَوَاعِيَةُ اللَّهِ وَرَسُولِهِ أَنْفَعُ لَنَا» “Allah’s Messenger (ﷺ) forbade us this act which was a source of benefit to us, but the obedience to Allah and to His Messenger (ﷺ) is more beneficial to us”.

Second: The duty on the neck of every Muslim is to join the work that will liberate the usurped Muslim land of Palestine, and all lands, and support his vulnerable Muslim brothers in Palestine and everywhere else. Al-Haq (swt) says: وَإِنِ اسْتَنْصَرُوكُمْ فِي الدِّينِ فَعَلَيْكُمُ النَّصْرُ “And if they seek help of you for the religion, then you must help” [Al-Anfal: 72]

How can you fail them and reconcile with their enemy and your enemy?!

Third: The puppet rulers of Sudan who started the path of normalization with the Jewish entity by Al-Burhan-Netanyahu meeting in Entebbe on 3/2/2020. These rulers want you to follow the “sunnah” of the agent leaders of the UAE who moved their treachery of the Ummah, their relationship with the Jewish entity from under the table to its top, as they proceeded to implement America’s plan (the Deal of the Century); to hand over Palestine exclusively to the enemies of Allah, the Jews!!

O Muslims: you should show these puppet rulers a position that pleases Allah and His Messenger ﷺ, a position whereby you will achieve your blamelessness on the great Day of Resurrection, and you slap these rulers with their black pages of betrayal on their grim faces so that they, the servants of the kuffar, know that we, the slaves of the Lord of the heavens and the earth, are absolved in front of Allah from their treachery. And we pray night and day, for the return of our usurped authority, and pledge allegiance to the Caliph of the Muslims; who will purify the lands from the kaffir Western agents and their treachery, so that we can return to being the best nation brought to humankind? This will not be possible without the sincere response of the people of power and protection to your belief in accordance to the Shariah method of the Messenger of Allah. They must know that their responsibility is great, so let them rise in obedience to Allah (swt) and a paradise as wide as the heavens and the earth prepared for the righteous: وَالسَّابِقُونَ الْأَوَّلُونَ مِنَ الْمُهَاجِرِينَ وَالْأَنْصَارِ وَالَّذِينَ اتَّبَعُوهُمْ بِإِحْسَانٍ رَضِيَ اللَّهُ عَنْهُمْ وَرَضُوا عَنْهُ وَأَعَدَّ لَهُمْ جَنَّاتٍ تَجْرِي تَحْتَهَا الْأَنْهَارُ خَالِدِينَ فِيهَا أَبَداً ذَلِكَ الْفَوْزُ الْعَظِيمُ “And the first forerunners [in the faith] among the Muhajireen and the Ansar and those who followed them with good conduct – Allah is pleased with them and they are pleased with Him, and He has prepared for them gardens beneath which rivers flow, wherein they will abide forever. That is the great attainment” [At-Tawba: 100]