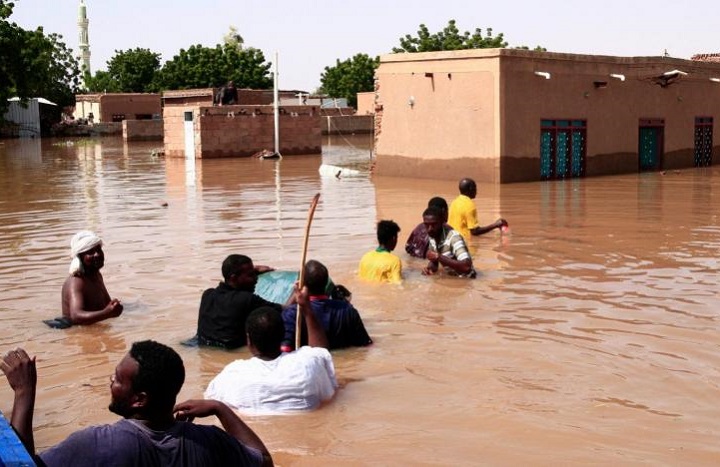 There is no Solution Except Establishing the Khilafah

The Flood Committee of the Sudanese Ministry of Irrigation and Water Resources warned on Thursday of an expected rise in the flood levels of the Nile River in the north of the country, while the levels are still critical in the capital, Khartoum, and the high revenue of the White Nile at the southern border remains at about 135 million cubic meters per day, which means continuing the threats to the riparian villages of the river until Khartoum. Sudan witnesses annually waves of torrential rains and floods that destroy the villages along the Nile.

For the third year in a row, the transitional government continues to fail to address the autumn problems; Where people die, homes are destroyed, public roads are closed, life is disrupted, with huge potholes that harm people and their cars, where movement worsens, car parking become empty of cars, and water accumulates in neighborhoods, forming pools in which flies, mosquitoes and harmful insects breed, and diseases and epidemics spread.

The people of Sudan have known the rainy season since ancient times, and they have known the rain forms until they taught them to their young ones. The fall has 10 forms of rain, and each one has 13 days; the most important of which are: Al Thuraya, the Al Asaa Al Atshana, Al Asaa Al Rawyana, Al-Draa’, Al Nitra, Al Tarfa, Al Jabha, Al Khurasanah, Al Iwa, Al Simakah. The people of Sudan are familiar of their times and the intensity of rain in them, and since ancient times, they have been preparing for them, and it was natural that any government that received the reins of government should be of the people of the country, knowing and familiar with the autumn and preparing for its dangers and disasters as a matter of responsibility, and to carry out the duty of care. However, the government dealt with the matter tepidly, as it is typical for the leaders of the transitional government, leaving people to face drowning, road closures, or epidemics.

The defunct government was arguing that autumn had surprised it, or did not prepare for it. As for today’s government, it has kept silent like the silence of the graves, which confirms that it does not differ from its predecessors. Since colonialism, it has been applying the republican democratic system, which does not take care of people’s affairs and does not care about their condition; the ruler in which is an employee and not a guardian, and the rule is spoils and cake and not a trust. As for Islam, the ruling is the taking care of people’s interests with the provisions of Islam, and a trust for which the ruler in this world is held accountable by the Ummah, and in the Hereafter by the Lord of the Worlds. The Prophet (saw) said to Abu Dhar when he asked him to appoint him a ruler, he said: “I said: O Messenger of Allah, why don’t you appoint me (to an official position)? He patted me on the shoulder with his hand and said:

“O Abu Dharr, you are a weak man and it is a trust and it will be a cause of disgrace and remorse on the Day of Resurrection except for one who takes it up with a full sense of responsibility and fulfils what is entrusted to him (discharges its obligations efficiently.)”

Islam viewed the ruler as a guardian for people’s affairs, fulfillinghis responsibility towards them; in opening canals and roads, emptying roads of water, filling potholes, and draining water into neighborhoods and public markets, Omar Ibn Al-Khattab used to say: “If a mule slipped in Iraq, I would be afraid that Allah would ask me why you did not pave the way for it, O Omar?”, affirming the saying of the Prophet(saw) whosaid:

“The ruler is a guardian and he is responsible for his subjects”.

Every day that passes, the people of Sudan realize that their problems can only be solved by establishing the Islamic state, Khilafah Rashidah (righteous Caliphate) on the method of the Prophethood. To live a decent life in which rain is a blessing.

For this great work Hizb ut Tahrir is calling you, so come along O people of Sudan.