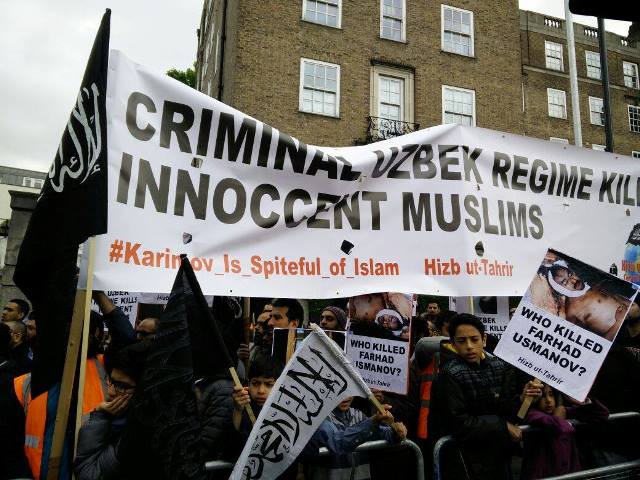 On 26/4/2018, the court in Tashkent turned into a stage for a major protest against torture. This was reported by the BBC radio. A video about the incident was published on Thursday, in which five people were tried on charge of “belonging to Hizb ut Tahrir” who are a married couple, a mother and her son and daughter. They are accused under Article 2-244 of the Uzbek Criminal Code (of forming, directing, and participating in extremist religious, secessionist, fundamentalist band groups). The relatives of the accused and human rights activists who gathered before the court have called for the punishment of those who tortured the accused.

Recent developments in Uzbekistan have brought good hopes for people. But is there hope in these changes? Our Prophet Muhammad ﷺ said: «اتَّقُوا فِرَاسَةَ الْمُؤْمِنِ فَإِنَّهُ يَنْظُرُ بِنُورِ اللهِ» “Fear the firasah (intuition) of a mu’min (believer) as he sees with the light of Allah”. [Narrated by al-Tirmidhi in his Jami’]

The observer of the events that are currently taking place in Uzbekistan with the eyes of the believer, will realize that the Muslims in Uzbekistan are subjected to harsh tests for the past 25 years under the tyrant Karimov, resulting in a convoy of martyrs who died under torture; and it is still ongoing and will continue as long as the ruling Uzbek regime exists, even if the faces change.

The changes taking place today in Uzbekistan, such as the release of some prisoners and the organization of Quranic and Hadith competitions, and others, can never fool the believer. While the prisoners of the public rights are released, on the other side they arrest and torture the religious and Dawah carriers and they are tortured harshly, while the regime adorns itself with paint to conceal its ugliness and dictatorship.

Although one year has passed since the presidency of Shaukat Mirzayev, many oppressed people remain in prisons, including women!

The Uzbek media, especially in the television programs, have long portrayed Hizb ut Tahrir members as misguided people, far from the truth, and despite the steadfastness of the members, female and male, of the party and their patience over the torture and long years of imprisonment and being subjected to great injustice, the media insist on these slanders and overlook the harsh torture and unjust extended prison terms!

We hate the policy of Shaukat Mirzayev, just as we have hated the policy of Karimov before, because they are from the same source! And we want a Khilafah (Caliphate) on the method of Prophethood that governs all parts of the earth with what was revealed by Allah (swt) because it is Allah who is the Creator of all things and He Alone has the right to establish laws for life. Allah (swt) says in His Noble Book

“Legislation is not but for Allah. He has commanded that you worship not except Him”

Just as it is not permissible to worship other than Allah (swt), so is the ruling, it is for none but Allah (swt). The current rulers all transgress the limits of Allah and put man-made laws that drives mankind to misery and harm. The Islamic state, which will be based on the Prophet’s method, Allah willing, will rule with justice; all who live under it will enjoy justice, even criminals will be treated with respect for their humanity.

“Legislation is not but for Allah. He has commanded that you worship not except Him. That is the correct religion, but most of the people do not know”