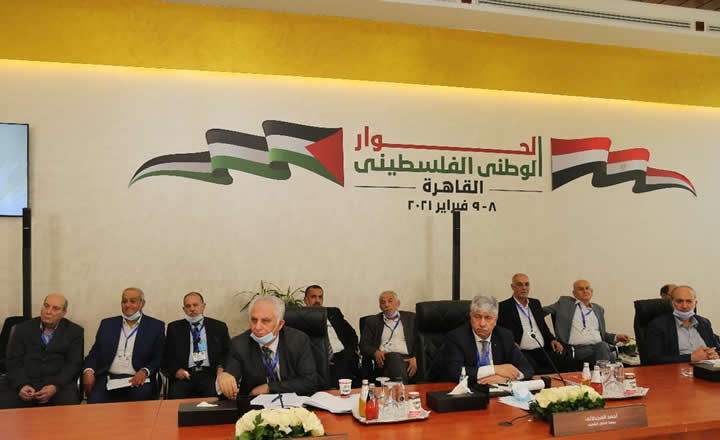 The Palestinian factions met in Cairo and agreed to hold the legislative, presidential and National Council elections. Will these elections be like the previous ones, a new chapter in the chapters of the liquidation of the Palestine issue and empowerment of the Jewish entity?

The elections that are being prepared cannot be viewed in isolation from the surrounding political circumstances, and they cannot be separated from the following:

1. The plans of the American administration to secure its interests, protect the Jewish entity, and resume the surrendering negotiations.

2. The successive steps of the Arab countries that betray Allah and His Messenger towards normalization with the Jewish entity.

3. The defence agreement that Jordan signed with the enemy of Allah, America, according to which America placed its hand on more than fifteen land, sea and air bases, in addition to guaranteeing freedom of movement for American forces in Jordan. This US occupation of Jordan came within America’s arrangements for the region in order to preserve its interests and to secure the protection of its “foster child”, “Israel”.

4. The endeavour of the great powers to tame the Palestinian factions to join the Palestine Liberation Organization, which has given up most of Palestine, and adopted negotiations and peaceful means as the basis for its relationship with the Jewish entity.

5. The meetings of the factions and their agreement and arrangements for the elections that took place by sponsorship of the enemy of Allah and His Messenger, the American agent, Al-Sisi.
This is the context in which the Palestinian elections will take place, and therefore the issue of Palestine now stands at a new chapter in the chapters of its liquidation within the vision of the new American administration, and it does not differ much from Trump’s vision except in some details, which is summarized in making the guardianship of the Al-Aqsa Mosque a joint trust, the annexation of some areas in the West Bank to the Jewish entity, and the disarmament of the factions in Gaza voluntarily or involuntarily. This is accompanied by extensive normalization processes to form a Jewish Gulf alliance that includes Egypt and Jordan. It is not correct to forget the high treason committed by the Palestine Liberation Organization by giving up most of the Blessed Land to the Jewish entity, under the umbrella of the Oslo Accords and the security coordination and futile negotiations, settlements have spread in the West Bank in a massive cancerous fashion, until it became a reality that the Palestinian Authority has shown its willingness to negotiate, and the Olmert-Abbas understandings are not far from you.

This is the political reality in which the Palestinian elections will take place. And they are designed to have their results according to what the enemies of Islam want regardless of who wins them. The terms of these elections are: a Palestinian Authority that sanctifies security coordination with the Jewish entity, regional agent states for the enemies of Islam that sponsor and manage their affairs, and movements and organizations that operate under their umbrella and exist on what they are paid from dirty political money, because the Palestinian elections are nothing but a tool and a means for the enemies of Islam, and if they find them according to what serves their interests they provide cover for their implementation, and if they find other than that, they prevent it from taking place, and if its results are not what they desire, they will not hesitate to turn the tables on everyone. Elections under the umbrella of occupation are only intended to serve the occupation and the interests of the enemies of Islam only. Allah (swt) says:

O our People in the Blessed Land: We are not discussing the elections in terms of being a representation and authorization. To give representation in what Allah forbade is a sin that causes the wrath of Allah (swt), or in terms of legislative councils contesting with Allah in legislation and governance, and this is from polytheism ruling of the taghoot, or in terms of rotten democracy, whose shame and corruption among the pioneer of democracy America is revealed. We did not approach these elections from these angles, although each one is sufficient to demonstrate its prohibition and the prohibition of participation in it, but we focused on highlighting the political side in it, that intense dark side through which the enemies of Islam plot against the Ummah of Islam in general and the people Palestine in particular, so that everyone, near and far, knows that even the slightest participation in these elections is a great crime and a great sin, because it is participating in a treacherous operation from the plots of the enemies of Allah and His Messenger.

O People in the Blessed Land: America, Allah’s enemy, realizes that the Islamic Ummah is about to be released from its shackles, and realizes that the Islam that is inside the hearts of the Muslims is a volcano that will erupt on its agents and spew its lava on its interests and burn it. And the greatest criminals in the major countries are fully aware that the establishment of the Khilafah (Caliphate) is a matter of time, and they see the seriousness of Hizb ut Tahrir in working to establish it, and they are preparing themselves to face it, and they are pursuing the Dawah carriers everywhere, and they place obstacles that they think will obstruct or prevent its establishment, for the enemies of Allah want to integrate the cancerous Jewish entity in the Islamic world. They are working to weaken the countries of the Muslims and keep the region in a state of conflict so that the Muslims do not revive. They do not want Ash-Sham to pacify, nor for Yemen to settle, nor for Iraq to be reassured, and this is what they are working on in Pakistan, Afghanistan and Bangladesh, and this is accompanied by signs of forming conflicting alliances. An alliance in which the Jewish entity is in control, it includes the Gulf, Jordan and Egypt, and a Shiite alliance that includes Iran and its supporters, and this is the persistence of the enemies of Islam and they think that by their crimes they are capable of crushing the Islamic Ummah and to keep it humiliated under their authority and the control of their agents, but let them dream, the Khilafah on the method of the Prophethood is Allah’s promise and the glad tidings of His Messenger (saw) and Allah will not break His promise.

In conclusion: We affirm that the issue of Palestine is the issue of the Islamic Ummah and not a national, regional or factional issue, and the enemies of Islam are the ones who are working to separate it from Islam and the Islamic Ummah. The path to liberating Bayt al-Maqdis is one and there is no other way. It is by calling the support of the Islamic Ummah and its armies to establish the Khilafah and liberate the Masra (site of Isra’) of the Messenger of Allah (saw). Calling the support of the Islamic Ummah and its armies for jihad for the sake of Allah (swt) is the only solution to the question of Palestine, and it is the solution that terrifies the existence of the Jews and topples the worn out thrones. It is the one that moves the Ummah for its glory, and whoever calls for partial or interim solutions from negotiations or the 1967 borders, or resorting to international resolutions and regional initiatives, is a traitor to Allah and His Messenger, and Allah does not accept their actions.

Our confidence in the victory of Allah (swt) is from our belief in our Lord, and our confidence in the people of the blessed land and the Islamic Ummah is from our trust in our Deen. The Khilafah (Caliphate) on the method the Prophethood is the promise of Allah (swt) and the glad tidings of His Messenger (saw), and that the whole world is yearning for Islam to save it from the oppressive tyranny of Capitalism and criminal rulers, and may Allah unite the Ummah of Muhammad with His supporters, and the Muslim armies will enter Bayt al-Maqdis, chanting the Messenger (saw) of the Takbeerat of Allah when he entered Khaybar:

«(اللَّهُ أَكْبَرُ، اللَّهُ أَكْبَرُ، خَرِبَتْ خَيْبَرُ، إِنَّا إِذَا نَزَلْنَا بِسَاحَةِ قَوْمٍ ﴿فَسَاءَ صَبَاحُ المُنْذَرِينَ» “Allahu-Akbar! Allahu-Akbar! Khaibar is ruined. Whenever we approach a (hostile) nation (to fight), “then evil will be the morning of those who have been warned.”” [Narrated by Al-Bukhari]. Allah’s Deen will prevail until it reaches the night and day. Imam Ahmad extracted from a saheeh chain of narrators on the authority of Tamim al-Dari, may Allah be pleased with him, who said: I heard the Messenger of Allah (saw) say:

“Verily, this matter (Islam) will reach where day and night have reached, and it will not leave a house of Madar (mud or clay) or a house of Wabar (fur of camels and goats, i.e. tents) except Allah will bring it into this Deen, (either) with the honour of an honoured one, or the disgrace of a disgraced one; honour with which Allah honours Islam, and disgrace with which Allah disgraces Kufr.”

So trust in Allah, Al-Qawi Al-Aziz (Almighty and Powerful), and hold fast to the strong rope of Allah and reject the crime of elections and those in charge of it, and enough for the violators is Allah’s (swt) saying:

“Then do they not reflect upon the Qur’an, or are there locks upon [their] hearts? Indeed, those who reverted back [to disbelief] after guidance had become clear to them – Satan enticed them and prolonged hope for them.  That is because they said to those who disliked what Allah sent down, “We will obey you in part of the matter.” And Allah knows what they conceal” [Muhammad: 24-26].