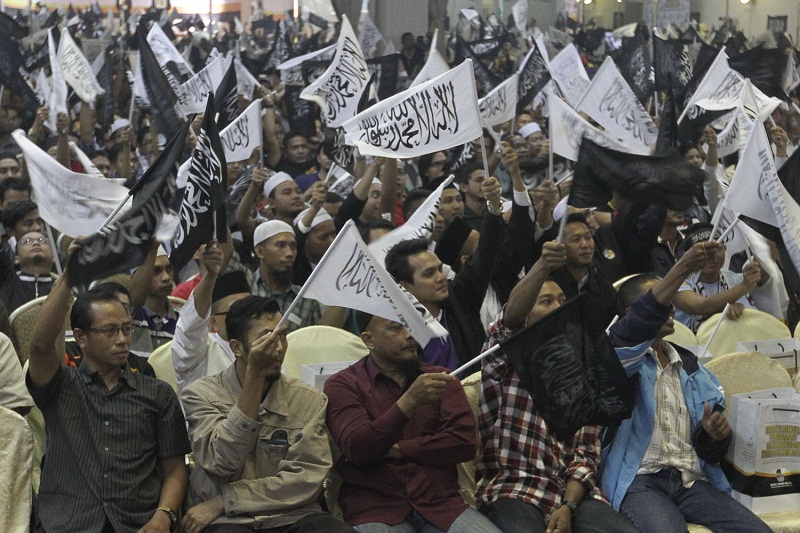 Sabah is the second state in Malaysia that has issued a fatwa against Hizb ut Tahrir after Selangor. The fatwa has been gazzetted on 07/09/2017 which was embarrassingly just a ‘copy and paste’ of the Selangor fatwa without any change of even the comas and the dots. The fatwa, which is full of defamation, fabrication, distortion and confusion against Hizb ut Tahrir, has been answered by the party through an Objection Booklet dated 08/11/2017 and handed over to the Mufti of Sabah on 13/11/2017. It is worth noting that the Mufti or rather the whole Mufti Department and the Sabah Fatwa Council have failed to answer the Objection Booklet, and with the Will of Allah (swt) they will continue to fail.

Based on that defamatory fatwa and other fatwas issued in Sabah with respect to deviant teachings, the Law and Native Affairs Minister of Sabah, Aidi Moktar, when tabling a Bill at the State Legislative Assembly on 06/08/2019 said that there are 25 deviant teachings in Sabah as of 2017. He further said that amongst them are Millah Abraham [Ibrahim], Hizb ut Tahrir and Shia which carry extremist roots that could resort to launching war on rulers and governments who do not believe in or whose thoughts are not in line with their teachings. “The existence of deviant teachings, particularly those that are extreme, does not only bring a negative impact on the safety of Muslims but also other occupants regardless of race and religion,” he said.

After being agreed upon unanimously by all other State Legislative Assemblymen, the Bill was passed to amend the Shariah Criminal Offenses Enactment 1995 by adding the definitions of Islam and Ahli Sunnah Wal Jamaah, besides making whipping as one of the penalties for the teaching of any doctrine or the performance of any ceremony or act related to Islam that is contrary to the Islamic law or any fatwa enforced in the state.

The State Assemblymen of Sabah also accused that Hizb ut Tahrir brings a negative impact not only to the safety of Muslims but also others. If only they have eyes, they would have surely seen how Hizb ut Tahrir has saved many youths of this Ummah by awakening them from living in ignorance to knowing the purpose of life; by educating them with Islam; by rebuilding their morality (Akhlaq); by making them obedient to Allah (swt); by turning them from not knowing a single word of Al-Quran to be the guardians of Al-Quran; by saving them from the damaging Western ideology to practicing Islam as their way of life. If only the State Assemblymen of Sabah have eyes, the would have surely seen that the Shabab of Hizb ut Tahrir, especially in Sabah, have done a lot of good work in the community and there were non-Muslims in Sabah who have converted to Islam as they see the beauty of Islam after discussing with the Shabab.

At the time when the State Assemblymen of Sabah accuses Hizb ut Tahrir of bringing negative impact to the society, they failed to realize that what they do is actually spitting to the sky and the spit returns to their faces! All Sabahan know who are plundering the wealth of Sabah into their pockets; all Sabahan know who have caused them to live in misery, hardship and lack in education and development for tens of years; All Sabahan know who have failed to grant them citizenship even though they have been living in Sabah for generations; all Sabahan know that Sabah is among the richest State in Malaysia, but the population are the poorest amongst Malaysians. As a matter of fact, all Sabahan know who are actually bringing negative impact on the occupants! The State Assemblymen of Sabah should have looked at themselves in the mirror before slandering Hizb ut Tahrir!

Finally, the State Assemblymen of Sabah failed to realize that the slander against Hizb ut Tahrir does not bring about any goodness, not to Hizb ut Tahrir, but to them, not only in this dunya, but also in the Hereafter!