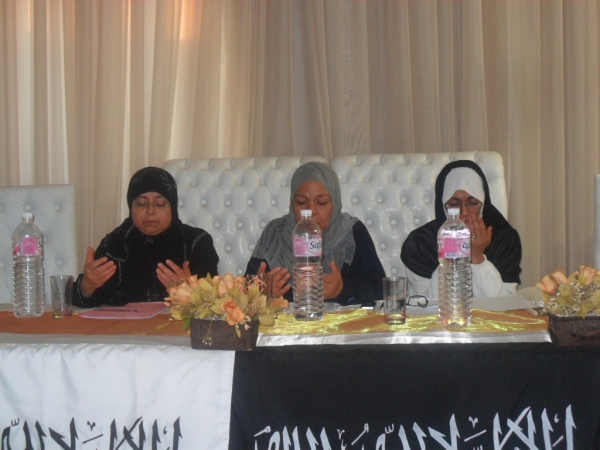 Following the talk held by the Women’s Section of Hizb ut Tahrir Wilayah of Tunisia on Sunday, corresponding to 8/12/ 2019 in the municipality of Al-Morouj, in which Ustatha Zainab Al-Dajbi delivered a speech entitled “Pressure of Western Dictates Through Civil Society Organizations”, a person who introduced himself as member of the security forces, contacted the house of her parents, she is married and a mother and resides in the marital home, and asked her father orally to inform his daughter that she is wanted by a research and inspection team.

By officially summoning her, they took her brother into custody to pressure her to attend without being able to be summoned according to the law; but by adhering to her rights, he was released.

Her lawyer contacted the aforementioned squad throughout the day, 11/12/2019 at different times, ranging between 11:45 am until four o’clock in the evening, until an appointment was made to attend with her and receive the summoning order. They used the excuse that their chief is not present, and the defense request was not responded to except at a late hour, until the hearing at five in the evening.

With the amazement of the defense and its request for a second date due to delay in time and the impossibility of attending, it set the date for Thursday, corresponding to 12/12/2019, but by keeping of the late timing – five o’clock – a time when the courts are outside working hours and the defense cannot deliver its voice to the Public prosecution to complain.

Therefore, we, the Women’s Section of the Media Office of Hizb ut Tahrir / Wilayah of Tunisia:

We consider that what Zainab Al-Dajbi is exposed to has a direct relationship with her political affiliation with Hizb ut Tahrir as a party that follows the political accountability method, especially the subject of her speech.

– We want to show the public opinion that the consequences against Ustatha Zainab Al-Dajabi are like settling political accounts using state institutions, such as trying to involve the security and judicial establishment in the war waged by Western agents and pockets of apostasy against the loyal people of the country.

– We remind the agents of the West whose interests were touched by the speech of Ustatha Zainab Al-Dajabi, member of Hizb ut Tahrir, that bullying of women is not the character of men.

– We remind the country’s enemies who conspire against it that the threat of imprisonment, arrests and other forms of repression and tyranny cannot discourage Ustatha Zainab Al-Dajbi nor any other women members of Hizb ut Tahrir from moving forward on their path towards establishing the Khilafah (Caliphate) on the method of Prophethood.

– We announce to everyone that we, the Women’s Section of Hizb ut Tahrir, are not subject to threats and abuses and not deterred from carrying the call to establish the crown of obligation.

– We consider these unjust dictatorial methods from a system that calls itself a democracy, sponsor of freedoms, and we consider them an indication of its failure, death, and moral and political fall.

Allah (swt) says: وَسَيَعْلَمُ الَّذِينَ ظَلَمُوا أَيَّ مُنْقَلَبٍ يَنْقَلِبُونَ “And those who have wronged are going to know to what [kind of] return they will be returned” [Ash-Shu’ara: 227].  Allah is Most Truthful.