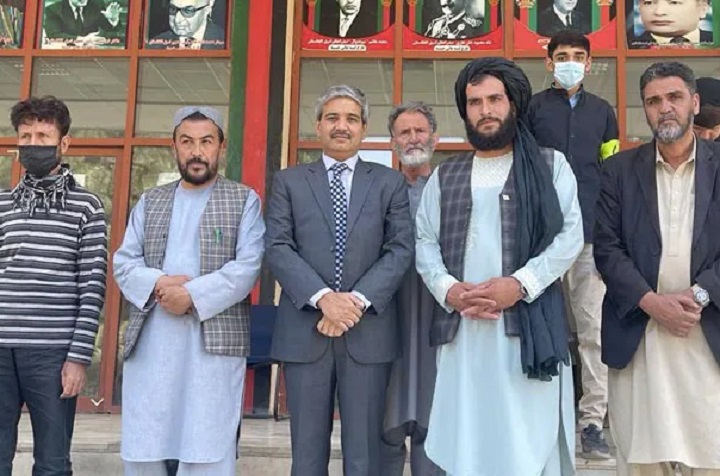 Amir Khan Muttaqi summoned the Indian delegation’s visit to Kabul a ‘good start’ that strengthens relations between the Taliban government and India, and requested for the resumption of Indian developmental projects along with the presence of Indian diplomatic and consular services in Afghanistan, especially for Afghan patients and students.

Comment:
Today, we, Muslims, live in a world where the secular values are practiced globally; human beings are led contrary to what Allah (swt) has commanded, and almost all affairs are administered through an infidel (kufr) order whose rules encompass everything ranging from international relations to interpersonal affairs. This infidel system of the world is overseen by some global organizations such as the United Nations as well as giant states such as the United States, European states, Russia, China, India and so on. These great governments and organizations of the world see the world as a family as if they are the guardians of this family. Although these governments and organizations act based on their own interests, they do not allow anyone else to challenge or threaten their secular order – while interfering even on marital relations among Muslims. As UN Secretary-General Antonio Guterres tweeted in reaction to the recent decrees by the IEA leadership: “I once again urge the Taliban to keep their promises to Afghan women and girls under international human rights law.”

When we talk about world order, we are actually speaking of the principles and norms that great world powers have put forward and kept forcing others to put them into practice. Most of these principles and rules are represented through foreign relations of national states. Secularism is referred to as the basis of these principles, and just as it encourages people as individuals to act according to their material interests, it also pushes the governments to act in accordance to their national interests, abiding by the world secular order and the respecting the prevailing global principles irrespective of any values, religion and customs. It is truly apparent from the consecutive behaviors of the Islamic Emirate that they view the ‘foreign policy’ from the same angle as the entire world does, and also demands to be a member of the global family which is ruled by infidel states and values, considering themselves as the father of other nations.

All this is happening while Allah (swt) has only chosen the Muslim Ummah to lead the humanity according to Islamic law; establish a world order, and become the Lord of the world. The basic mission of an Islamic State, which is being inherited from the Prophets, is to proclaim the Deen [religion] of Allah over all religions and/or systems by means of Dawah and Jihad. If it does not do so, the necessity and philosophy of the Islamic State will go under question. That is why, all foreign governments are seen as enemies according to the foreign policy of an Islamic State, viewing them as infidels. It’s on Muslims to extend Islam for them – if they do not surrender, the Mujahedeen of the Islamic State shall march towards them. As the Messenger of Allah (saw) said:

“I have been commanded to fight against the people till they testify La ilaha illAllah (There is no true god except Allah) and that Muhammad (ﷺ) is His slave and Messenger.”

In the meantime, it is permissible for an Islamic State to conclude treaties, trade and political relations with some infidel governments, but these treaties must be temporary. However, it is not allowed to establish treaties and diplomatic relations with the warring governments. The principle is to fight the warring governments to have them submitted to the rule of Islam. Examples of such governments are China which has occupied East Turkestan, torturing the Uyghurs; Russia which has invaded Syria and Libya, the occupied-Crimea, and dominated Central Asia; and the US, which is a global bully that has blatantly invaded the Islamic world while providing support to the Jewish state; as well as the Hindutva regime of India which has occupied Kashmir, torturing, raping and murdering Muslims for years, and even banning our Muslim sisters to wear Hijab at educational institutions. So how could one abandon the Islamic jurisprudence while grabbing the Western jurisprudence in dealing with such governments?!

Finally, what is that prevents us from disliking the revolutionary implementation (in all aspects of life) of Islam, carrying it by means of Dawah and Jihad? While the consent of Allah is better than the satisfaction of today’s powers; sustaining friendship and enmity based on Islam is better than friendship and enmity based on secular diplomacy; the support of Allah (swt) is better than the assistance of infidel governments; and the breadth of Jannah is better than the logjam of the world. Therefore, we must remove the mental and intellectual barriers, which are due to the current reality of world order, and consider Allah (swt) as our Wakeel (the One who better administers our affairs) by establishing the real government of the Ummah. He has full dominance over everything and is also the Best of planners.

“˹This is˺ the promise of Allah. ˹And˺ Allah never fails in His promise. But most people do not know. They ˹only˺ know the worldly affairs of this life, but are ˹totally˺ oblivious to the Hereafter.” [Ar-Rum: 6-7]