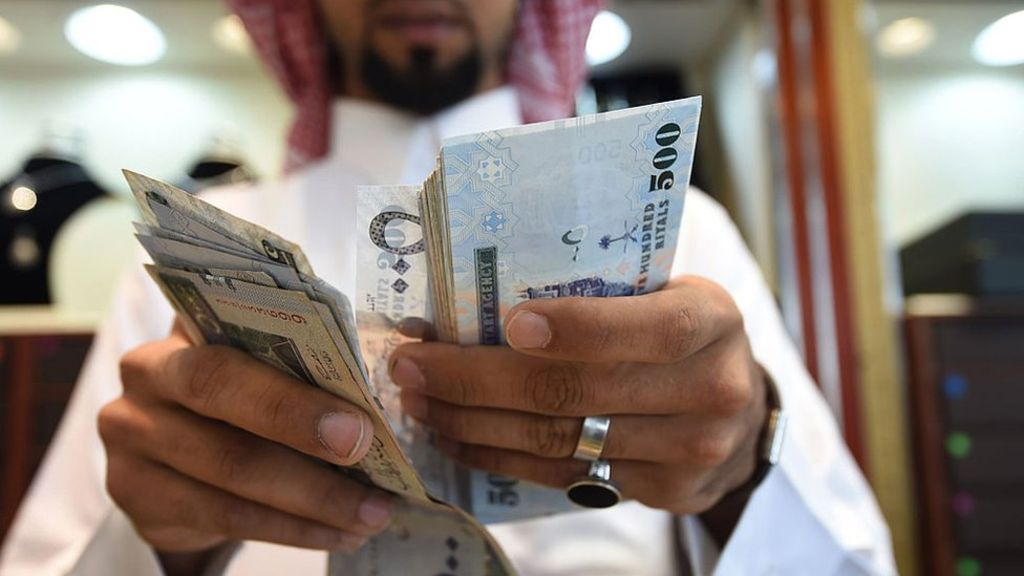 Saudi Arabia will triple its value added tax rate and suspend a cost-of-living allowance for state employees, the kingdom’s finance minister said on Monday (11.05.2020), seeking to shore up finances hit hard by low oil prices and a coronavirus-driven slowdown. “The cost of living allowance will be suspended as of June 1 2020, and the value added tax will be increased to 15 percent from 5 percent as of July 1 2020,” Finance Minister Mohammed al-Jadaan said in the statement reported by the state news agency. [Al Jazeera, 11 May 2020]

The oil-rich nation has seen its income plummet as the impact of the pandemic has forced down global energy prices. The kingdom first introduced VAT two years ago as part of efforts to cut its reliance on world crude oil markets. The allowance of 1,000 riyals ($267) per month to state employees was introduced in 2018 to help offset increased financial burdens including VAT and a rise in the price of petrol. This announcement of increase of VAT from 5 to 15% came after state spending outstripped income, pushing the kingdom into a $9bn budget deficit in the first three months of the year.

The value added tax (VAT) is the tax that will be levied at each level, from the manufacturer, purveyor, retailer and consumer which will result in an increase of price of goods and services. This increase in VAT by the kingdom is infact strengthening the problematic capitalist system and protecting the wealth of the corrupted leader. The people of majority are obliged to pay the tax from their blood and sweat, continue comforting the minority of the rich today and the future. Saudi, one of the wealthiest oil countries, has been monopolised by the Saudi family with extraordinary luxurious spending and lifestyle leaving the people to sponsor them with Tax and other natural resources income which should belong to the people. The Saudi economic reform following the capitalist system is just creating another gap between the poor and the rich.

Islam’s Fiscal policy removes direct and indirect forms of taxation, which leads to economic growth. The level of taxation in any nation will affect people’s behaviour, including their choices with regards to working patterns, saving and investing. Taxation has created a number of problems in wealth distribution where the burden falls heavily upon the poor with the rich utilising tax loopholes and tax havens. Islam has a completely different perspective on the economy and tax as the Islamic basis is different to that of capitalism. Islamic taxation is not comprised of income tax, value added tax, nor excise duties.

Indirect taxes and fees, in their various names, are levies that are prohibited in Islam, because they are consuming people’s money unlawfully, due to the saying of the Prophet ﷺ: «لا يَحِلُّ مَالُ امْرِئٍ مُسْلِمٍ إلا عَنْ طِيبِ نَفْسٍ مِنْه» “Properties of a Muslim is prohibited (for the others to take) but by his willingness.”

As for Customs, it is the maks, in which the Messenger of Allah ﷺ said:«لا يَدْخُلُ الْجَنَّةَ صَاحِبُ مَكْسٍ» “He who imposes maks (custom duty) would not enter paradise.”

As for the value Added Tax on goods, which causes its price to rise are prohibited the Shar’a. The Messenger of Allah ﷺ said: «مَنْ دَخَلَ فِي شَيْءٍ مِنْ أَسْعَارِ الْمُسْلِمِينَ لِيُغَلِّيَهُ عَلَيْهِمْ كَانَ حَقًّا عَلَ أَنْ يُقْعِدَهُ بِعُظْمٍ مِنَ النَّارِ يَوْمَ الْقِيَامَةِ» “Whosoever was involved in any of the prices of the Muslims, so as to increase it for them it would be due on Allah to place him in a great fire at the Day of Judgement.”

Also in order for the State to perform the duty placed on it by the Shari’ah, the Shari’ gave the State the authority to collect certain revenues. “The constant revenues of the Bayt al-Mal are “all of war booties, head tax (jizya), land tax (ushr, kharaj), a fifth of the buried treasure (rikaz), State properties, as well as customs tax taken from the covenanters and belligerents, funds resulting from the public property, inheritance funds of those that have no heir, illicit funds taken from governors and State officials, illegally earned funds, funds of fines, funds of apostates, and taxes…” [The Economic System in Islam by Hizb ut Tahrir]. The funds of the Bayt al-Mal are basically more than enough to provide for all of these duties.

However the State has the right to impose taxes in order to undertake anything that the Shariah obligated upon the Ummah if the funds in the Bayt Al-Mal were insufficient since the obligation for funding it would be transferred onto the Ummah. The State has no right to impose a tax for the sake of whatever is not obligatory upon the Ummah to undertake, and so it is not permitted to collect fees for the courts or departments or to fulfil any service.

It is forbidden for the Islamic State to take anything from the Ummah which is not obligatory upon the Muslims, even from their surplus wealth! Even if there is nothing left in the Treasury, the State is only allowed to borrow from the surplus wealth of the rich among the Ummah, and then only for a duty obligated by the Shari’ah upon the Ummah and the Bayt Al-Mal. And only at that point, where there is nothing left in the State Treasury, the State is allowed to take the amount that is required for the Bayt Al-Mal and nothing more. So before asking the wealthy among the Ummah for their support, the state has to utilize every single dirham in the Bayt Al-Mal.

Ali (ra) suggested to Umar Bin Al-Khattab (ra) that there should be nothing remaining in the Bayt Al-Mal saying to him: “Divide whatever wealth you receive every year, and do not hold onto anything from it” (reported by Ibn Sa’d from Al-Waqidi). And it is reported: “that Ali used to spend everything in Bayt Al-Mal to the point that he would sweep it and then sit it in” (reported by Ibn Abd alBarr in Al-Istidhkar from Anas b. Sirin).

And that the way out from these oppressed taxation policies begins with a return to Islam, and taking the treatments from its provisions, so that the revenues and expenses of the state, are based on the Sharia, which subjugates people to the Lord of the Worlds. The only solution is to change on the basis of Islam, which is a duty on our necks, to engage in hard work to implement the law of Allah, by establishing the Khilafah Rashidah (righteous Caliphate) on the method of the Prophethood, which takes the money by its legitimate (Shari’) right and dispenses it in its Shari’ way. And it carries out the duty of tending to the Ummah, not imposing taxes, customs, and not tightening people’s livelihood, but provides them with food, clothing, housing and all that is related to the right of taking care of the people’s affairs.