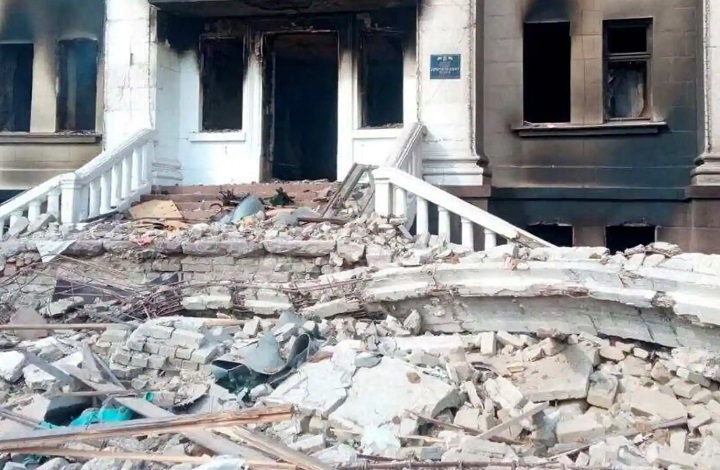 On Thursday, 17th of March 2022, Russian air forces bombed a theatre in the town of Mariupol. The international community initiated global condemnation of the act as it was reported that the Russian word for “children” was clearly marked outside of the building. At the time of the bombing, hundreds of civilians were said to have been sheltering in the building, many of them families with children.

Petro Andriushchenko, an adviser to the city’s mayor, earlier said emergency workers were struggling to reach the building due to constant shelling.

Comment:
The indiscriminate brutality of governments targeting women and children in combat situations is nothing new in western politics. The Ummah still have the very real memories of the “shock and awe” carpet bombings that were delivered to the innocent children of Iraq under the ordinance of United States instructions. Russian fighters are seasoned practitioners of child murder with their armies having extensive practice in Syria The pure, defenseless blood of the new born babies was a favourite target as maternity units were ravaged by the full force of Putin’s hatred for non-Russians.

War cannot be considered a safe place for any human, however Islamic laws acknowledge that the rules of engagement never cross the sacred boundaries of harming non-combatants, namely women, children and animals. Allah (swt) says clearly in the verse of Quran Surah Al-Maida verse 32;

“On that account: We ordained for the Children of Israel that if any one slew a person – unless it be for murder or for spreading mischief in the land – it would be as if he slew the whole people: and if any one saved a life, it would be as if he saved the life of the whole people. Then although there came to them Our messengers with clear signs, yet, even after that, many of them continued to commit excesses in the land.”

In the noble example of the Caliph Abu-Bakr (ra), it was forbidden act randomly in was, his famous statement offered the following commands;

“When you meet your enemies in the fight, behave yourself as befits good Muslims…. If Allah gives you victory, do not abuse your advantages and beware not to stain your swords with the blood of one who yields, neither you touch the children, the women, nor the infirm, also men, whom you may find among your enemies.”

Also, “In your march through the enemy territory, do not cut down the palm, or other fruit-trees, destroy not the products of the earth, ravage no fields, burn no houses…Let no destruction be made without necessity.”

He reportedly went so far as to say that when Muslim armies ran out of food, they should only take food from civilians in enemy territory enough for one meal.

From these evidences we can see that the brutality of secular law is the real matter of concern for world politics and not the return of the justice and security of the Khilafah (Caliphate).