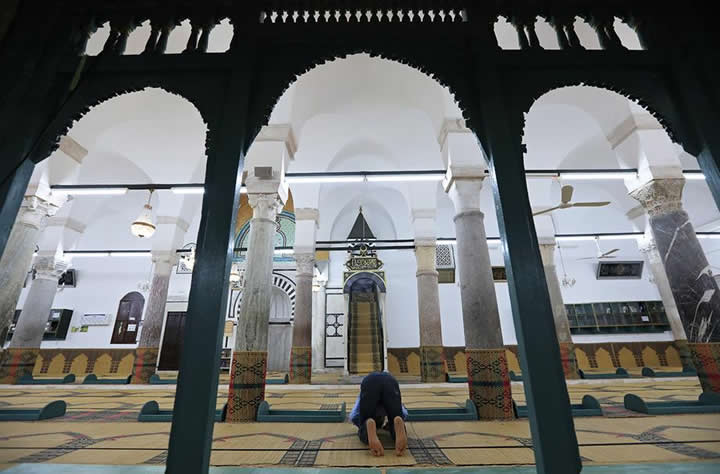 The rulers of Tunisia have reached great levels in their aggression and audacity towards Allah’s Deen and in restricting the livelihoods of the people. They dared to target the month of Ramadan, the second most important ritual in Islam by an offensive decision, the curfew, that automatically prevents Muslims from performing Maghrib, Isha, Taraweeh and Fajr prayers in the masajid. And it targets the frailest circle of café and restaurant workers and others by cutting off their livelihoods and starving them, and it prevents collective iftar tables for the poor and needy. So has the Coronavirus epidemic become the excuse to fight the rituals and great rulings of Islam?! And since when do these rulers care about the health of the human being whom they have starved with their corrupt policies?! Aren’t their wrong and selective policies the main reason behind the spread of Coronavirus?!

Why doesn’t this authority, that is suffocating the people, admit that the surge of the epidemic during the months of January and February was due to the New Year’s Eve celebrations? Why does it not acknowledge that the third wave was due to the demonstrations that swept the streets between the warring parties over power? Are mosque-goers and those with fragile livelihoods the reason for the outbreak of the Coronavirus epidemic?!

Mosque attendees have followed a literal commitment to health measures to prevent the spread of Coronavirus, which confirms that the offensive decisions taken by the government prior to the blessed month of Ramadan are aimed at restricting Muslims from practicing their Islamic rituals. In addition to preventing some professions from carrying out their work to provide for their children. Instead of asserting prevention methods, increasing testing, isolating patients and providing sufficient beds to accommodate the sick, the state covers up its incompetence by targeting the rituals of Islam and the vulnerable groups in society.

Hizb ut Tahrir / Wilayah of Tunisia warns the rulers of Tunisia against the wrath of Allah, Al-Muntaqim Al-Jabbar who says in the definite Revelation:

“And who are more unjust than those who prevent the name of Allah from being mentioned in His mosques and strive toward their destruction. It is not for them to enter them in fear. For them in this world is disgrace, and they will have in the Hereafter a great punishment” [Al-Baqara: 114].

The Ummah of Islam must be vigilant and concerned about its rituals, distinguishing between taking actions following measures and prevention and those who take that as an excuse to conspire against it and its Deen, so fasting Ramadhan and observing its rituals is one of the five pillars of Islam and one of its main pillars, it is not permissible to remain silent about targeting its rituals. It is the duty of every Muslim to rebel against these unjust rules, to stand up and defend his Deen and to show anger for the violations of the sanctities of his Lord,

“they want to extinguish the light of Allah with their mouths, but Allah refuses except to perfect His light, although the disbelievers dislike it” [At-Tawba: 32].