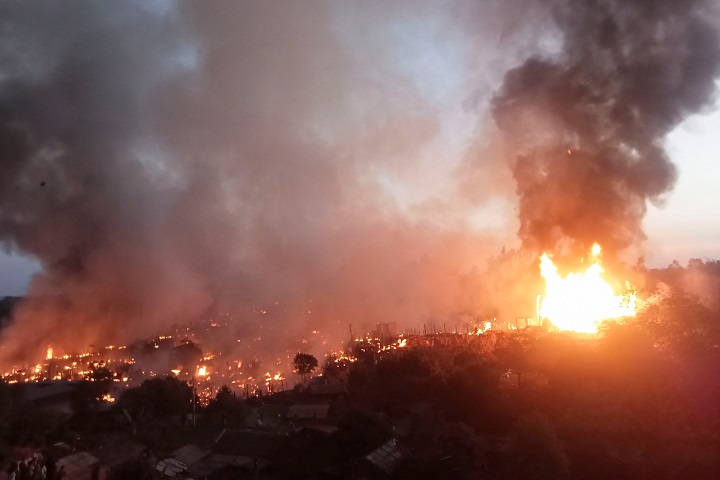 The International Organization for Migration (IOM) reported a devastating fire at a COVID-19 treatment center in Cox’s Bazar camp in Bangladesh, which houses refugees fleeing from Myanmar, on Sunday afternoon, 9/1/2022. The UN agency said, in a tweet on Twitter, that no one was injured as a result of the fire that broke out, but noted that the fire affected thousands of Rohingya refugees, and caused severe damage to parts of the largest refugee camp in the world, which includes nearly 900,000 refugees.

Cox’s Bazar camp is made up of attached shelters of bamboo and tarpaulin, making them easily flammable, adding to the suffering and fear of the refugees.

It should be noted that this is not the first time that this camp has been exposed to this and other dangers. In March 2021, 10,000 homes were burned and at least 45,000 people were displaced. Heavy monsoon floods in July 2021 affected 46,000 refugees and caused devastating landslides.

Our brothers and sisters fled from the oppression of the Myanmar criminals. They were subjected to ethnic cleansing by the burning of villages, killing and harassment; which the Myanmar authorities deny, claiming that they are fighting Islamic extremists. In fact, it seeks, with its hatred and animosity for Islam and Muslims, to exterminate these people and turn the rest of them away from their Deen.

Our brothers and sisters fled death, hoping to survive and live in safety, but the government of Bangladesh did not secure that for them, so they became like those who sought in fire, refuge from scorching heat! They live in houses threatened by fires that devour their fabric and bamboo, and do not protect them from the cold and floods of winter. They are shelters, but not shelters! It is only to deceive the people, as this government does not welcome their presence on its lands, and has expressed on many occasions that it intends to deport them and return them to Myanmar, despite the danger to their lives, especially after the brutal military campaign that began against them in August 2017, that made them threatened and unsafe.

The situation of Muslim refugees in Bangladesh and elsewhere reveals the conspiracy of the existing governments in Muslim countries with the enemies of the Muslims. These refugees fled their countries for fear of death, accused of extremism and terrorism, to live a life of humiliation and oppression in the countries in which they sought refuge. They lost security, tranquility, and shelter. They ran for their lives, hoping that they would find refuge in these governments, but their hopes were dashed and the fires from which they fled followed them, and fear, neglect and death followed them.

O Ummah of Islam: These are our brothers and sisters, who were oppressed by the criminals. They displaced them, subjugated them, and weakened them, so they fled with their Deen and did not change it. They searched for security in these governments, but they were disappointed. Is refuge sought from such people?! They are agents who follow the misguidance of the criminals and their methods and they work with them to oppress the Muslims and fight their Deen.

O Ummah of Islam: These are our brothers and sisters who suffer, so how long will the humiliation last? How long will the enemies of Allah oppress your sons while you are silent? So, rise up and shake the dust of humiliation off you, by Allah, this is not acceptable to you, because Allah (swt) made you the best Ummah brought out to humankind.

We in the Women’s Section in the Central Media Office of Hizb ut Tahrir call on every sincere person from the people of power and protection to support our call to restore the rule by what Allah (swt) has revealed and to restore the Khilafah (Caliphate) State by which alone the oppression will be repelled from every Muslim man and woman and from all who live under its shade. We call on the scholars of the Ummah to support the word of Allah so that it is supreme, to carry out their part. O you are the heirs of the prophets, mend the situation of your Ummah and raise your voices against your rulers, call for the unity of your Ummah and the return of its authority.

We appeal to every Muslim man and woman to work with us to support this Deen and make it dominant on earth so that we support our brothers and sisters in every place.

We will not remove from them the injustice and oppression they are experiencing, the humiliation and poverty they suffer from, unless a state is established anew for the Muslims that defends them and repels them from every aggression.

We pray to Allah (swt) to unite the scattered parts of this Ummah, support it, and restore its glory and pride, sooner rather than later.

“…And incumbent upon Us was support of the believers” [Ar-Rum: 47]