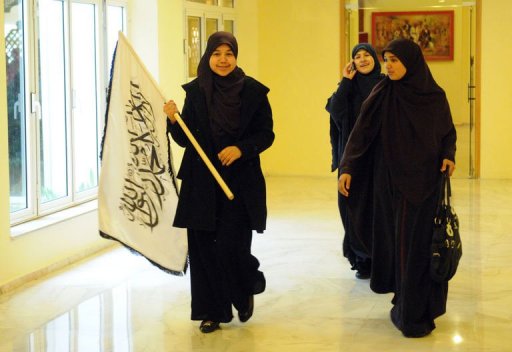 Tunisian activists have accused the regime of using women’s rights as a distraction tool after the controversial ‘economic reconciliation’ law was pushed through parliament last week. Protesters took to the streets in anger after the bill, which allows Ben Ali era officials to escape prosecution, was passed despite widespread ciriticism from activists and NGOs. Just hours later, the government announced that a law which prevented Tunisian Muslim women from marrying non-Muslims had been scrapped. The timing of the move has been criticised by some, who believe that President Beji Caid Essebsi is attempting to hide the reality of life in Tunisia under the veil of women’s rights. (Albawaba)

The revolution in Tunisia that started with protests in Sidi Bouzid against the corrupt and repressive Ben Ali regime which led to the so-called Arab Spring, igniting protests in Egypt, Syria, Yemen and Bahrain, is seen today by the international community as a democratic model for the Middle East. This is despite Tunisia’s poor economy with public debt at 63% of GDP, 40% youth unemployment, new harsh austerity measures like increased taxes, dismissal of ten thousand public service workers, the selling of state banks and now the so-called Reconciliation Law that will pardon with amnesty corrupt ex-officials in the Ben Ali regime who are responsible for stealing the wealth of the Ummah and producing this bankrupt and oppressed condition for Muslims in Tunisia.

This current bankrupt status quo is Tunisia would not exist if not directly due to the ongoing cultural, political and economic imperialisation of Tunisia by the European Union (EU), primarily France and Germany who are responsible for achieving this so-called democratic “success story”. The EU, France, Germany and the IMF with their billions of conditional dollars lent to Tunisian government since the 2011 revolution have been instrumental in demanding for this democratic change. The EU has clearly stated that it expects Tunisia to have, “a greater social and economic integration with the European Union” and the €1.2 billion lent to Tunisia between 2017 and 2020 aims to facilitate this objective further into the future. This is in addition to the 2.8 billion dollar loan by the IMF that expects the economy to grow at whatever the cost to the society and its people.

This secular, liberal democratic cultural change includes Islamic cultural changes for Muslim women like the overturning of the 1973 circular on Tunisian Muslim women marrying Muslim men. “Congratulations to the women of Tunisia for the enshrinement of the right to the freedom to choose one’s spouse,” presidential spokeswoman Saida Garrach wrote on Facebook, is one such example of this ongoing imperialised secular change. The secular campaign and crusade against Islam and Muslim women by the secular nationalist party Nidaa Tounes and the President from the Ben Ali regime period, Beji Caid Essebsi clearly targets clear cut Islamic laws.

“Do not marry unbelieving women (idolaters), until they believe: A slave woman who believes is better than an unbelieving woman, even though she allures you. Nor marry (your girls) to unbelievers until they believe: A man slave who believes is better than an unbeliever, even though he allures you. Unbelievers do (but) beckon you to the Fire. But Allah beckons by His Grace to the Garden (of bliss) and forgiveness, and makes His Signs clear to mankind: That they may celebrate His praise.”

Therefore, the revolution in Tunisia is far from complete. Muslims of Tunisia continue to speak out and protest against the ongoing man-made economic, cultural and political European colonial control and its oppressive laws that are implemented by their obedient political partners who loot the Ummah’s wealth, upturn Islamic laws for Muslim women in the name of “equality”, and returns corrupt Ben Ali regime officials to the parliament to then once again re-start the bankrupt authoritarian corrupt system that Tunisians rose up in the first place against.

Indeed the Muslim women of Tunisia have had enough of the manipulation and disregard towards them by a deficit secular regime who cares only for the next delayed municipal election that aims to cement Essebsi’s grip on power.

Only the Islamic Khilafah political system will do away with once and for all, the corruption, the oppression and the loss of dignity and honour caused by secular liberal and nationalist colonial rule. Only in accordance with the Quran and Sunnah will the power, glory and justice return once again for the people of Al-Zaytounah, bi ithnilah.

“This case is sure to come where the night and day appears, and Allah will not leave a single house of settled or nomadic residents without this religion, exalt a noble and belittle a worthless fellow. Allah will magnify the glory of Islam and humiliate disbelief.” (Narrated by Ahmad)