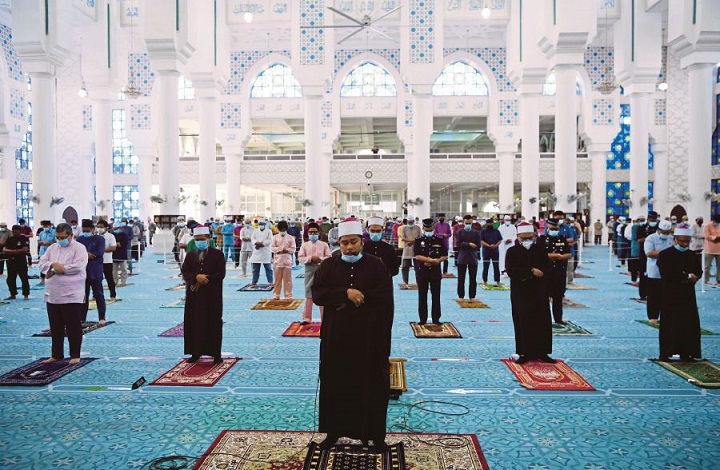 As new daily cases of COVID-19 shot pass 32000, the State of Selangor Religious Department (JAIS) came up with a new ruling for Friday prayers. Only those who have completed their 2 vaccine doses and the booster dose will be allowed to perform the Friday prayers. This news caused a flurry of criticisms and many are furious with this latest restriction. Social media is abuzz with anger as many Muslims are not allowed to fulfil their duties. Videos abound in the social media of Muslims, denied entry to mosques in the Selangor state, praying outside the compounds of these mosques for Friday prayers. It is obvious that this new restriction is based on the unfair assumptions and unbased worry that mosques may be breeding grounds for the Covid-19 virus. And many see this as a denigration of Islam!

Comment:
On the 21st of February, JAIS distributed a circular which declared that the Sultan of Selangor have agreed to maintain the current standard procedure in mosques but adds that only those who have completed 2 doses of vaccine and a booster will be allowed in. Consequently, majority of mosque goers were denied entry to mosques for Friday prayers. This is similar to what had been decreed two years ago. When the pandemic begun, religious institutions of the country, with the advice of the Ministry of Health closed all mosques for any congregational activities except for committee members, including Friday prayers and this went on for many months. This week, with the new ruling implemented by JAIS, Selangor is the only state in Malaysia that deliberately stops congregators from performing their duties based on an unbased assumption – that those without boosters are carriers of COVID19!! The irony is, other locations such as supermarkets, shopping centres, entertainment outlets, temples, churches, in fact, anywhere – none of these rules are applied!!! Booster shots are not required according to the law and people are given the choice to take them or not. Making rules, based on this choice, to stop Muslims from performing their duties is clearly an abomination!

The question is, why is JAIS so adamant in issuing the prohibition when even the government is not putting the booster as a requirement to carry out daily activities? As for now, only about 60% of the population of Selangor have taken boosters which leaves about 40% unable to attend Friday prayers due to the ruling! What JAIS is doing is akin to closing mosques and denying Muslims from performing their duties. The act of closing mosques by the authorities is haram and they bear the burden of sin for their decision. Allah (swt) said:

“And who are more unjust than those who prevent the name of Allah from being mentioned in His mosques …” [Al-Baqara: 114].

We see that various sectors of society are moving towards normality and Muslims are keen to frequent mosques after many months of closure but JAIS, arguing that COVID-19 is on the increase, is keen to disallow worshippers from frequenting mosques. Regulation of entry to other sectors of society does not reach the extent of what JAIS is doing even though the chances of catching COVID-19 is much higher in those places whereas it is in the houses of Allah that pure worshippers enter the best and cleanest parts of the earth. Denying Muslims from performing Friday prayers in the event of the spread of a disease such as COVID-19 should not be carried out in general, but rather the sick should be isolated and are not allowed to enter the mosques for the congregational or Friday prayers. Healthy people, even without boosters, must be allowed to pray. Administration of boosters to be allowed for prayers should not be made as a condition. JAIS have clearly stepped out of bounds in this matter. Taking precaution should never include disallowing Muslims from carrying out their obligations.