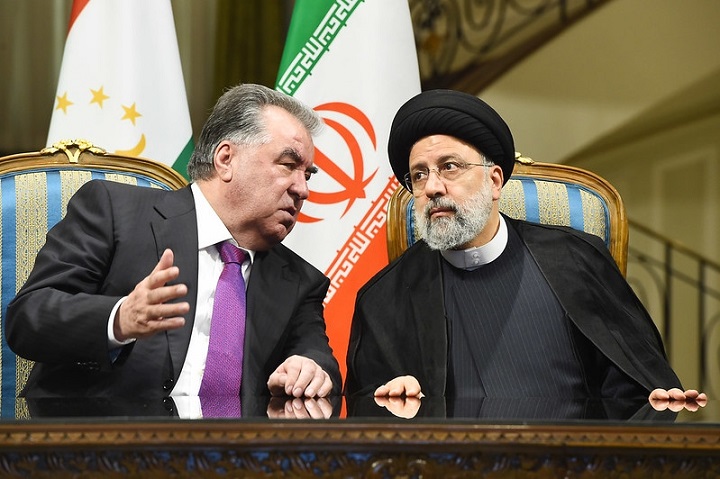 On May 16, a meeting of the heads of the CSTO members took place in Moscow. Before that, Russian President Putin met with Rakhmon the President of the Republic of Tajikistan. It was about the modernization of the Tajik army. Even during his speech to other presidents, Rahmon focused on his problems.

After this meeting, on May 30, the head of Tajikistan, Emomali Rahmon, was officially received by Iranian President Ibrahim Raisi. This was reported by the Iranian agency IRNA.

Comment:
Already for 9 years, Emomali Rahmon severed ties with Iran and sharply accused Iran of supporting the terrorist organization IRPT. So what prompted the President of the Republic of Tajikistan to go to Iran at that very moment?

For a clearer understanding of this topic, we need to know that the basis of the conflict between Iran and Tajikistan was the Islamic party IRPT. Although the IRPT adheres to democratic methods of coming to power, but having a supporter behind it, how Iran frightened the Rahmon government. In order to eliminate this opposition party, Rahmon decided to get ahead of them before they gain a foothold in all power structures, especially in the military. Many members of this party received long sentences, and the leader of the party and others moved to different countries. A large number, including the leader of this party, received asylum in European countries.

From there, they continued their activities working through social networks. They tried to create public opinion against the President and his family and to make the people dare to stand against the regime. But their action did not lead to the results they expected.

Therefore, on May 9, the leader of this party, Muhyiddin Kabiri, gave an interview to Radio Liberty and said that their ideological and political activities did not lead to results and that the regime understands only the language of fighting it with the help of force and weapons. And he added about the opening of a military wing and that in the future they would not prevent the people from taking up arms.

Kabiri also told publications close to the opposition that “a few years ago, the use of force and weapons by the majority of Tajik political forces, including the IRPT, was denied in Tajikistan, but after the events in Ukraine, the world has changed.”

Therefore, at the CSTO meeting, Rahmon counted on the fact that this organization would help him in the case of the Taliban and, if anything, with internal enemies.

For many years Tajikistan did not want to enter the CSTO of Iran. Apparently, after these events, Putin also told his lackey Rahmon that it was time for him to get together with Iran.

In connection with this, on May 18, President of Tajikistan Emomali Rahmon received the Chief of Staff of the Iranian Armed Forces Muhammad Bokiri.

“Today, we are in a position where we can export military equipment to meet the domestic needs of allied and friendly countries in order to improve security and strengthen peace,” Bokiri said, calling the opening of the plant in Tajikistan “a turning point in military cooperation between the two countries.”

Drones “Ababil-2” are designed primarily for surveillance and intelligence gathering. But they can also be equipped with explosives and used as kamikaze combat drones, turning them into a guided missile. The duration of the flight “Ababil-2” is up to 1.5 hours, the maximum cruising speed reaches 220 km/h. Control can be either remote or automatic.

Also, the Chief of Staff of the Iranian Armed Forces also held meetings with Tajik Defense Minister Sherali Mirzo and Chairman of the State Committee for National Security of the country Saymumin Yatimov.

Apparently, it is more profitable for Iran to cooperate with the Rahmon’s regime than to be in a quarrel over the IRPT. Moreover, in one of his online conversations with a group of students and professors from one of the Iranian universities, Muhiddin Kabiri, a leader of the National Alliance of Tajikistan and leader of the Islamic Renaissance Party of Tajikistan, clarified many issues related to the relations of the IRPT with Iran. Kabiri not only categorically denied that Iran provides support and assistance to the IRPT, and moreover, he is dependent on Iran, but also accused the Islamic Republic of Iran of failing to fulfill its obligations as a guarantor of inter-Tajik peace.

Unfortunately, Islamic parties realize their mistake too late. They do not base their activities on the basis of the ideology of Islam, so they suffer in the end.

Hizb ut Tahrir has long warned the IRPT about the prohibition of working with the regime in parliament and reminds today to leave nationalist views and work to restore the Islamic way of life with the creation of the Islamic state of the Khilafah (Caliphate).