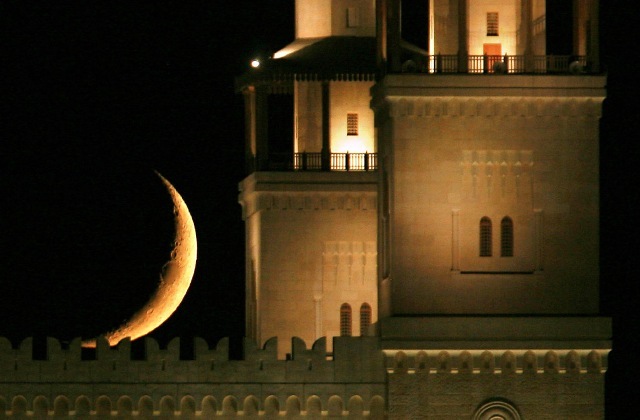 As soon as it was the sunset of Monday 3/6/2019, the dispute between the puppet regimes over the confirming announcement of the sighting of the Shawwal moon began. It was apparent that the source of the dispute is their subordination and political positions. These differing regimes, whether Saudi Arabia or Jordan or the Palestinian Authority or Qatar or others do not care about the worship of people and do not value the rituals of Islam.

The conformation of the sighting of the moon is a Shariah matter and only the Islamic ruling is considered, according to the saying of Allah’s Messenger ﷺ: «صُومُوا لِرُؤْيَتِهِ وَأَفْطِرُوا لِرُؤْيَتِهِ، فَإِنْ غُمِّيَ عَلَيْكُمْ فَأَكْمِلُوا الْعَدَدَ» “Observe fast on sighting it (the new moon) and break (fast) on sighting it (the new moon), but if the sky is cloudy for you, then complete the number (of thirty).” [Muslim]

The scholars of evil and the government scholars publish fatwas and retract them to please the agent rulers. The Fiqhi Council approved the opinion of the united sighting of the moon, which is followed by most of the countries and it is what Al-Azhar has adopted. The Palestinian Authority’s Mufti Sheikh Muhammad Hussein has already endorsed the unity of the moon sighting in a press statement, and called upon the Muslims to adhere to it. The Palestinian news agency, WAFA, published this in 2009, stating that “the proof of the beginning of the Hijri months, such as the month of Ramadan, the month of Dhu al-Hijjah and other lunar months, is by the sighting method. If the crescent moon is sighted in an Islamic country, all countries are required to follow, especially in countries that share the hours of night, according to the Hadeeth of Allah’s messenger: ‘صوموا لرؤيته، وأفطروا لرؤيته، فإن غم عليكم فأكملوا عدة شعبان ثلاثين’ “Observe Saum (fast) on sighting the crescent and terminate it on sighting it (the new moon), but if the sky is cloudy before you, then complete the number (thirty days) of the month.” The Mufti stressed the importance of taking the month of fasting to be a factor in the unity of the Muslims, and not a cause of disagreement and division between them.) End quote.

The Palestinian Authority’s and its Mufti’s deviation from this Shariah view confirms their manipulation of the Deen and subjecting it to political whims; which is a complete crime that they will be asked about on the Day of Judgement.

These regimes, which manipulate the worships of people and disturb their Eid celebrations, unite in submission to the colonial powers and unite behind the fight against Islam, which proves that they are not from this Ummah, but rather are enemies to it, to its Deen and to its Islam. This requires Muslims to hasten to overthrow these systems and silence them and replace them by the Khilafah Rashida (Righteous Caliphate) on the method of Prophethood. The Khilafah, is the one that will implement the rituals of Islam and will liberate Al-Aqsa and all the occupied Muslim land and will support the vulnerable everywhere.

We are in Hizb ut Tahrir in the Blessed Land – Palestine are innocent to Allah from the crime of manipulating the Deen and its rituals. We affirm that the Muslims are one Ummah, not divided by borders or dams. If the crescent is seen in a country from Muslim countries, and the sighting is according to Shariah, it is therefore a sighting of the whole Ummah, and is not subject to the colonial divisions of the Sykes-Picot. And we confirm that the crescent moon of the month of Shawwal has been established according to the Shariah method, and that Tuesday is the first day of the month of Shawwal, the blessed Eid al-Fitr where the crescent was seen in more than one Islamic country.

Therefore, we extend our congratulations to the people of Palestine and the Muslim in general on the occasion of the blessed Eid al-Fitr. We ask Allah (swt) to reward us with His victory soon and to unite Muslims under a Khilafah Rashida (Righteous Caliphate) on the method of Prophethood that will bring back the glory and dignity to the Muslims. And then the Eid Takbeers will merge with the Takbeers of victory.

May Allah accept your good deeds and Eid Mubarak