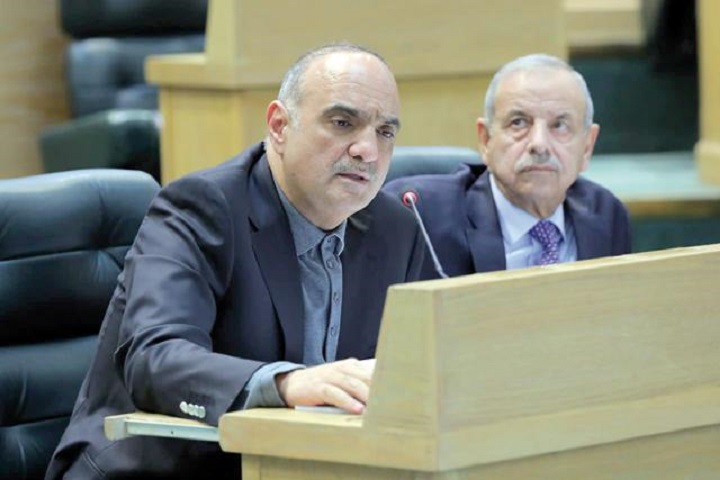 Surely Exorbitant Debt, Unemployment and Poverty are Bankruptcy in Itself

Prime Minister Bisher Al-Khasawneh said during a discussion session in the House of Representatives on Monday, 04/18/2022, that “Jordan is resilient and far from bankruptcy, according to the testimony of the World Bank,” adding that “international credit rating agencies have confirmed Jordan’s credit rating at a safe level and others have raised it.” He added, “We have a balance of foreign currencies amounting to 17 billion dollars, which is a historical and record balance, and we have not reached it in the history of the Hashemite Kingdom of Jordan, and our economic conditions are strong and strict.”

These statements came in response to criticisms made by Taher al-Masri, who is also a former head of one of the regime’s governments in Jordan, in which he said, “We are quickly approaching the recognition of Jordan as a bankrupt country,” after he directed other harsh criticism of the governments and the recent constitutional amendments.

In the face of these statements by the men of the regime’s governments in Jordan, current and former, which involve fallacies and misinformation, especially what the current prime minister has stated, we state the following:

1- The criticisms and statements of the former prime minister came late and in the context of the capitalist economic system itself and through the same state agencies and pillars that led to the debt.

2- The public debt in Jordan has tripled within a decade to approach 40 billion dinars in 2022 after reaching 13 billion in 2011, and it is steadily increasing and has reached nearly 113% of the gross domestic income, meaning that it borrows and pays more debt service more than he produces from income, and most of it is from taxes, customs, usurious debt and people’s pockets.

3- The World Bank, which the Prime Minister cites, and the International Monetary Fund, who also praises his testimony about Jordan’s commitments to its economic programmes, are first-class colonial tools in the hands of America and the West to drown Jordan in debt. Jordan was included in the programs of the IMF and the World Bank in 1989, and another prime minister two decades ago described the economy in Jordan as in the recovery room.

4- The three main credit rating agencies in the world, including Fitch, are American tools that tamper with the economic ratings of countries, individuals and institutions, to achieve their interests, whether up or down. Raising Jordan’s rating and describing it as stable is a cunning deception intended to enable the government to borrow $7 billion at competitive rates, that is, with usurious loans to bridge the budget deficit, which leads to more debt dumping.

5- Foreign debts did not contribute to increasing the rates of economic growth, which stagnated or declined for years, did not increase in development indicators, did not improve production, and did not increase those debts except the burden and underdevelopment, poverty and unemployment, and in the end the country’s mortgage to the foreigner and the loss of political decision.

6- The Prime Minister is misleading with the foreign currency reserves, amounting to 17 billion, in the reassurance of not being bankrupt. The balance here is clearly inclined towards the indebtedness that is likely to increase, and this reserve has been temporarily increased recently as a result of deposits, loans and foreign aid in foreign currencies and will decrease after paying the due debts and their usurious returns.

7- The ability to repay the debt or the repayment that is actually done is not a cause for pride or reliance, because the payment today is taking place at the expense of the economic components of the state, and the repayment is done with a new forbidden usurious borrowing, that is, with future debts, which leads to the rescheduling of debts on new bases that one should be
wary of.

Foreign debts are a colonial rope by which rulers encircle the necks of peoples, and even rob them of the will of the political regimes, so that their decisions are mortgaged to their enemies, and the countries and servants are subjected to the forces of the Kafir colonists. The failure of the regimes to support the people of Jerusalem and Palestine is nothing but the result of economic and political capitulation.

The most dangerous type of bankruptcy is not material bankruptcy, despite its danger. Rather, it is intellectual bankruptcy and political emptiness that leads to the abyss, by following the rules of colonial international financial institutions and mortgaging them, and abandoning the Islamic economic system that prohibits usury, distributes wealth to members of the subjects, and defines and protects property. It is what the Ummah must follow, as it is political stupidity to witness bad examples of the bankruptcy of countries that fell into the clutches of debts and colonial monetary funds and continue to adhere to their tracks!

Jordan is part of the Islamic Ummah, and the Ummah’s inexhaustible wealth is the general property of the Muslims and not the property of the ruling regimes. For the Prophet (saw) said:

“The Muslims are partners in three things: water, pasture and fire.”

And the economic problem in Islam is in the distribution of wealth, not its production, especially in our countries, which Allah (swt) has endowed with great wealth, so to work to establish the Khilafah Rashidah (rightly-guided Caliphate) State that implements the systems of Islam, including the economic system, we invite you O Muslims.