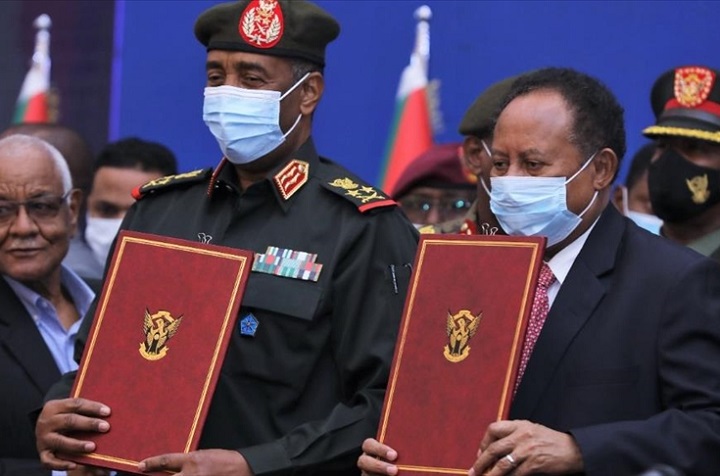 On Sunday, 21/11/2021, a political agreement was signed between the two tools of the international colonialism in Sudan; Al-Burhan and Hamdok. The agreement came in fourteen points to rearrange the political scene in favour of the military. This comes after Al-Burhan’s coup on Hamdok, and his house arrest on 25/10/2021. America, Britain, their regional tools, and other countries were quick to welcome this agreement.

We in Hizb ut Tahrir / Wilayah Sudan want to clarify the following facts:

First: Crossing red lines by the civilians who are linked to European’s colonialism, especially Britain, and their demand for the presidency of the Sovereign Council and placing the security services in the hands of the Prime Minister to rearrange and re-structure them and freeing them from US influence, and set them in the service of English influence, all this have hastened Al-Burhan’s coup which was planned for him and supervised by the US Special Envoy Jeffrey Feltman on his visit to Sudan that concluded on the evening of 24/10/2021.

Second: The civilians led by Hamdok wagered on the public and international pressure, in forcing Al-Burhan to retreat from his coup, and that was a losing bet! So how can the one who plagued the people with humiliating torment for two years, applying the unjust capitalist system, with direct instructions, and arranged prescriptions from the enemy Kafir West, how can such a ruler imagine people’s coming out the street to support him? So, it was a disappointment, and the response to each demonstration was weaker than the one preceded it. The international pressure was weak, because America rejected describing actions taken by Al-Burhan as a coup. Ned Price, U.S. Department of State Spokesperson, states, “The United States considered what happened in Sudan a military takeover, and the word “coup” needs a legal assessment.” (Al-Hurrah Channel 26/10/2021). Also, Feltman stated that he accepts a civilian government with or without Hamdok in it, and said: “We reaffirm that people’s restoration of partnership led by Hamdok or without him is a must.” (Al Arabiya Net, 02/11/2021).

Third: When the message reached that the street response was weak, and that the American concoction was ready, US Assistant Secretary of State for African Affairs Molly Phee, returned to Khartoum from 14-16 November 2021. According to a statement of the U.S. Embassy in Khartoum as reported by the Anatolia that the purpose of the visit is: “To support the reaching of a solution to the Sudanese crisis and the return of Hamdok to office.”

Thus, between Feltman’s arrangement for the coup, and the arrival of Molly many waters has run under the bridge that necessitated that the British agents, specially Hamdok, lower their ceiling, and were satisfied with his return as prime minister, to work under the supervision of the Sovereignty Council and the military according to the political agreement, and not to demand the presidency of the Sovereignty Council and the restructuring of the security services.

Our country has become an arena for international conflict between the old colonial polar (Britain), represented by Hamdok and the advocates of civilian, and the modern colonization (America) represented by the leaders of the military institution. The civilian and military ideas are one of the tools of this conflict, they are two sides of the same coin; the doctrine of separating religion from life, bringing misery and adversity, focusing the influence of the colonizer and looting the country’s wealth and its goodness. This is the truth as the sun in the fourth day, and no consolation for the fool, the simples and those who are deceived.

O the Sincere People of Power and Support: You are not freed from guilt in front of the Almighty, except by taking the rule from these puppet agents who spoiled life, humiliated the people, and support Hizb ut Tahrir that works in the Ummah and with it to establish the Khilafah Rashidah (rightly guided Caliphate on the method of the Prophethood, which will uproot the influence of the colonizer, apply Islam purely, and repair what the civilization of the West spoiled throughout the globe, and this will be, by you or by other than you, so answer the call for the dignity of this world and the success of the Hereafter.

“Indeed, Allah will not change the condition of a people until they change what is in themselves.” [Ar-Ra’d: 11].

The first step in change is awareness of the reality, and on the Ideology of great Islam as a Aqeedah (doctrine), and systems of life implemented by the Khilafah Rashidah on the method of the Prophethood. So, so come along to the project of your revival on the basis of the great revelation, that was formulated by Hizb ut Tahrir, in order to study it, carry it, support it, and bring it to governance; for in that is the goodness of this world and the Hereafter.