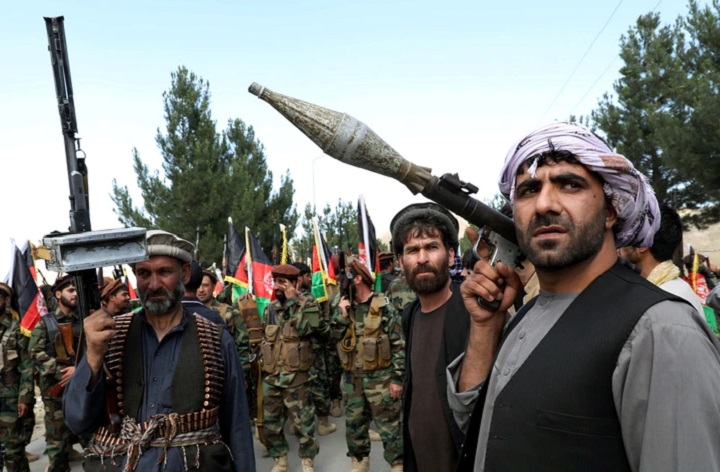 The US intelligence community concluded last week that the Afghan government will fall to the Taliban as soon as six months after the US completes its withdrawal, according to a report published on Wednesday. The assessment, obtained exclusively by the Wall Street Journal, pushes aside more optimistic assessments made earlier after Taliban forces had made significant inroads against the government in the past week. It was developed after the American military said it is more than 50% of the way to meeting US President Joe Biden’s deadline for all American forces to exit Afghanistan by Sept. 11. Afghan government forces are currently locked in heavy fighting with the Taliban in the key northern city of Kunduz after the group seized the main border crossing with Tajikistan. Intense fighting is also ongoing on the outskirts of Mazar-i-Sharif, Afghanistan’s fourth-largest city. The past week has seen several surrenders of Afghan forces to the Taliban with pictures and videos circulating on social media indicating the extremist group’s fighters have seized major stockpiles of military hardware and vehicles. Amid the developments, the intelligence community downgraded an earlier assessment that the Afghan government would survive for two years after the US exit with a timeline now of between six months and a year, officials told the Wall Street Journal. Mark Milley, the Chairman of the Joint Chiefs of Staff, downplayed the Taliban’s advances during congressional testimony, saying on Wednesday “There’s 81 district centers that are currently, we think, are underneath Taliban control. That’s out of 419 district centers.” (Source: Anatolia)

Comment:
It was clear from the beginning that the US has failed to eliminate the resistance of the Mujahideen in Afghanistan. The US has also affirmed the failure of its agent government in Kabul to impose its authority and control over various regions of the country. Hence, America resorted to diplomatic solutions through negotiations with Taliban, hoping to achieve what it could not achieve through its military. However, America has also failed to achieve diplomatic victory through negotiations, as the negotiators do not represent the people of Afghanistan as a whole, representing only a part of them. The downplaying by Mark Milley of the importance of the progress achieved by the Taliban is only a justification for the American insistence on withdrawal. The control of Taliban over 20% of the country before American withdrawal, as acknowledged by him, would mean that Taliban would continue to control various regions, even after the withdrawal of America. This is what Russia warned of, when the Russian Presidential Spokesman, Dmitry Peskov, expressed his country’s concern about the heightened tensions in Afghanistan, with the foreign military withdrawal.

It is inconceivable that America would withdraw, whilst leaving Afghanistan to the control of the Taliban. Instead, America hopes to utilize Pakistan, Turkey and Russia, along with the agent government in Afghanistan, to ensure that the Taliban cannot eliminate the main stronghold of the Kabul government. Hence, Washington organises the roles of these nations in the recent days since Biden came to power. The US does not mind to repeat the Iraq scenario in Afghanistan, leaving the country in chaos, with no faction having complete control over the country as long as the sincere people are not in authority and the American interests are protected in the country. The government of Iraq, for instance, did not impose its authority and its control over all of Iraq. Instead, the government of Iraq was able to protect the oil wells that were looted by American companies. The government was also able to prevent the opponents of America in Iraq, from amongst both the Muslims and the Baathists, from gaining authority. This is the utmost aspiration of America and its envoy Ibrahim Khalilzad to achieve in both of the countries.

In order to maintain Afghanistan in a state of “creative chaos,” America sought to involve Turkey’s Erdogan, Pakistan’s Imran Khan and Russia’s Putin in confronting the advancement of Taliban’s control over sensitive regions of Afghanistan, including the Green Zone of Kabul, the airport, supply routes and other vital facilities of the country. It is as if the US is saying, “As long as our interests are protected by our agents, as long as Islam does not rule the country, let the country burn with the fire of war, let the Muslims kill their own Muslim brothers.” This is their plan. As for the plan of Allah (swt), it is obliged upon the sincere people of Afghanistan to join hand in hand with their brothers in Pakistan to overthrow the agent regimes in Pakistan and Afghanistan, establishing the Khilafah of Muslims which will unify Pakistan with Afghanistan to become a single, strong and most feared state as the first state of Madinah Munawwara was. This state will sweep the remaining peons and agents of the West to unify the entire Islamic Ummah.

“But they plan, and Allah plans. And Allah is the best of planners.” [TMQ Surah Anfal: 30]