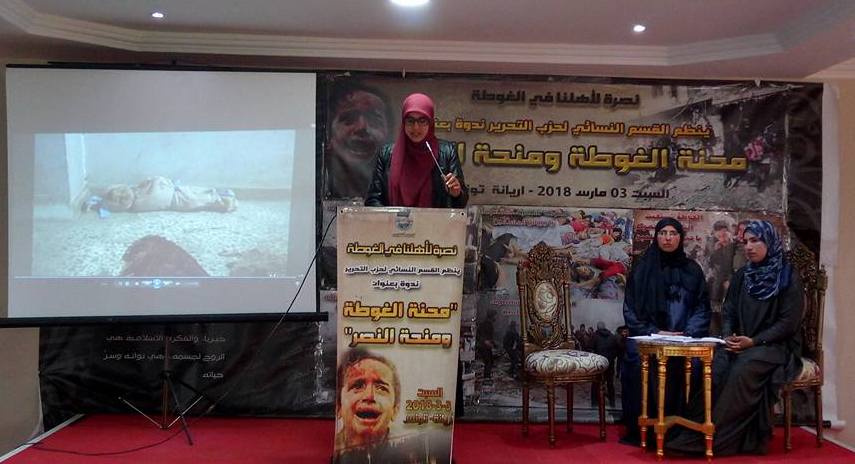 The Women’s Section of Hizb ut Tahrir Media Office in Wilayah of Tunisia:

– Clarifies that the major countries, led by America, Russia, Britain and France are directly responsible for the crimes committed against our people in Syria.

– Confirms that the silence of the Muslim world for the crimes of the West and Bashar is clear evidence that our rulers are only agents, and they are responsible in their capacity for what happens to the innocents of Syria in general and Ghouta in particular.

– We declare that we, the Women’s Section of Hizb ut Tahrir in the Wilayah of Tunisia, adopt the cause of our people in Ghouta, and therefore we seek to inform people of their cause and work towards lifting the grievance from them.

– We urge the Muslim Ummah to unite its efforts and aid the innocent people of Ghouta.

– We urge the people of power and authority to line up in the ranks of their nations who are exhausted from the oppression of tyranny and agents, and keeping pace with the revolutionary movements against their situation, as well as colonialism and its agents.

– We urge the Muslim armies to work with all seriousness and firmness to establish the Khilafah Rashidah (rightly guided Caliphate), which is the only solution to protect the vulnerable Muslims, whether in Syria or anywhere else in the world. The armies only need to uproot the agent rulers and restore the authority of the Muslim Ummah by establishing the Khilafah on the method of Prophethood, which will liberate the lands and the people.

“Unless ye go forth (in Jihad), He will punish you with a grievous penalty, and put others in your place; but Him ye would not harm in the least. For Allah hath power over all things.”