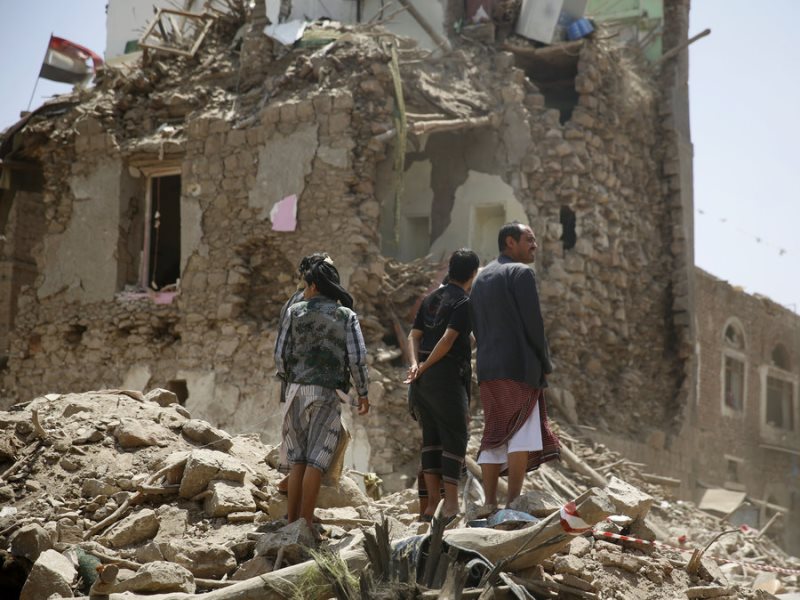 Under the sponsorship of the second United Nations envoy to Yemen Ismail Ould Ash- Sheikh Ahmed, the first session of the Geneva 2 sessions on Yemen was held on Tuesday 15/12/2015 CE, after nine months of simmering hostile battles, between those converging today at the negotiating table in Geneva, Switzerland, which claimed the lives of tens of thousands of victims not involved in the conflicts. Both the conflicting parties in Yemen are fighting its opponents to secure its interests and the interests of its masters, and in the end will be subject to the will of the solutions at the negotiating table when they are agreed upon by the conflicting colonial countries, and they will work to subdue the people of Yemen to their rotten outcomes.

Since when has the United Nations and the city of Geneva been a lifeboat for the Muslims?! Where are those who call for ending the guardianship Yemen, who lost their voices in calling for the United Nations, and their pens have dried up for directing messages for its intervention in the fighting and the conflict in Yemen?! Going to Geneva does not reflect the end of guardianship of Yemen, but it is the continuation of the guardianship and it acceptance and welcoming it. Allah سبحانه وتعالى says in the Book:

The fighting parties in Yemen, shook hands, and posed for a souvenir photo, and read the Fatiha for the souls of their victims, as if they were not the cause of the bloodshed during the last period. The dialogue in Geneva 2 started from where it ended, at the Movenpick Hotel in Sana’a under the sponsorship of the first United Nations envoy to Yemen Jamal bin Omar by involving Houthi rebels coming to power from Saada to Sanaa by force; which reveals the suspicious role of the United Nations in Yemen, in serving the American politics to bring the Houthi to power, at a time when America is waging a war around the world on those who tread a path other than the path of democracy in the access to power, and who use weapons to achieve political goals. However, it fell silent over all the armed actions of the Houthi rebels, but on top of that it welcomed the participation of the rebels in the government through the statements of its ambassador in Yemen, Matthew H. Tueller, at the news conference in his country’s embassy in Sanaa on 18/9/2014, when he said: “We differentiate between those groups that participated in the political process, the Houthi movement participated in the National Dialogue Conference and a lot of positive results came out of it, and they have political positions and aspirations that are legitimate … and therefore we support al-Houthi and his movement in carrying out the same practices carried out by groups and political parties.” Then it backed them up by Jamal Bin Omar and Ismail Ould Ash-Sheikh to achieve its aspirations of relegating of the British political influence in Yemen and the extension of its own political influence as a substitute. The British, whose ambassador in Yemen, Jane Marriott said to Hamid Al Ahmar: “The Houthi rebels will not stop except in Sana’a, and they have their own agenda,”

Those who are aware of the America acts in Yemen have changed Salih and his party from an opponent of the Houthis to an ally and supporter; to get a postwar political share with them plus that which they will get from Hadi’s team; which means that the cycle of violence and fighting in Yemen stopped for a while but did not end.

Hizb ut Tahrir – is the leader that does not lie to its people – will continue to reiterate to the Muslims in general, and to the people of Iman and wisdom in particular: The conflict in Yemen is to politically control it, between the Old and the New. It is between Britain, the old colonial power with its political influence in the north and south of Yemen, and between America, the new colonizer aspiring to extend its political influence in its lands in Britain’s place, and working for its fragmentation and making it part of the focus of the regional conflict, which the people of Yemen have no interest in, because they are Muslims, and Allah سبحانه وتعالى said:

“O you who have believed, do not take the disbelievers as allies instead of the believers. Do you wish to give Allah against yourselves a clear case?”

The people of Iman and wisdom have lost their blood which are no longer sacred to the fighters; because those working for their selfish immediate interests, prioritize their achievements over everything, including the blood of Muslims in which the Messenger of Allah ﷺ says:

“The demise of the Dunya is lesser Allah than the killing of a Muslim man.” (Narrated by Tirmithi on the authority of Abdullah bin Amr)

So will the people of Yemen remain as the pitch for the international players to meddle in however they want? Or will they rise and have their say and denounce those who lead them for achieving the interests of others, and they undertake the work with those who are working for the establishment of the second righteous Khilafah State (Caliphate) on the method of Prophethood, so that Allah will make the truth prevail and destroy the falsehood, and the colonial states of the West suffer defeat, and its influence will be uprooted from the country of Iman and wisdom?