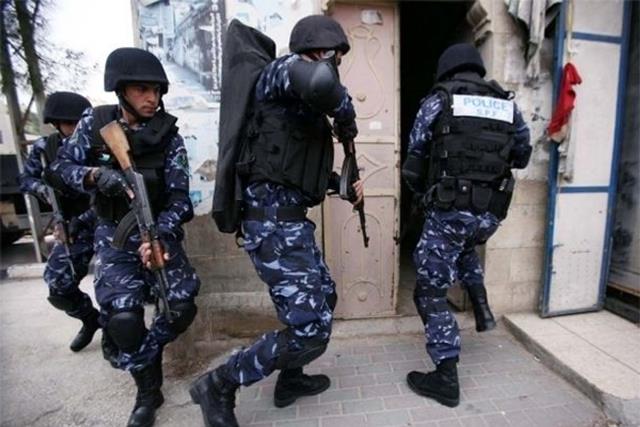 With the approach of Bahrain’s treacherous workshop to pave the way for the liquidation of the Palestinian issue, in accordance with criminal Trump’s vision, the Palestinian Authority (PA) continues to detain the members of Hizb ut Tahrir arbitrarily without regard for their most basic legal rights, to exercise their right and Shariah duty in political action and enjoining what is good and forbidding the evil. The detentions were barbaric, the PA raided the houses of the detainees after midnight, without taking into account any sanctity, and it spread corruption, broke the doors and terrorized the women and children, in a shameful scene simulating the actions of the occupation army!

Although 10 days have passed since the arrest of more than 40 members from the party in the various West Bank governorates, most of them have not been released, and their bail has been denied, a clear indication that the continued detention is imposed on the courts and perhaps on the Palestinian Authority itself!

These arrests of Hizb ut Tahrir’s members, who stand in the face of the conspiracies of the liquidation of the Palestinian cause while the Palestinian Authority claims its opposition to the liquidation of the issue, because it regards it as an American conspiracy. However, its actions on the ground and its daily behaviour expose its lies. It is an Authority based on Oslo and surrendering most of Palestine to the Jews. The PA protects the Jewish entity and seeks to ensure their security, and its president sanctifies the security coordination, which is fighting the people of Palestine in their Deen, their honour and their livelihood, it is working to displace the people of Palestine by creating the difficult conditions and impoverishment of people to fill the pockets of their leaders and elements of government, to guarantee their continuous forsaking and in pursuit of the liquidation of Palestine project. It arrests and attacks all those who exposes its betrayal or corruption.

Can any sane person believe that an authority like this opposes the schemes of liquidation or seek to confront the conspiracy on the question of Palestine?! Are the security organs that control the joints of power, which was built and trained by US General Dayton abort America’s plans?! Where they prepared for this role by America?!

And from the falls of this PA, which reveals its truth and increase its decline in front of the people of Palestine is that it claims its opposition to the Bahrain workshop and at the same time, “understands” the participation of some regimes in this treacherous workshop!

The power of Oslo has brought nothing but destruction to the people of Palestine, and now it makes them face economic calamities, moral corruption and political betrayals, and plots against them, and arrest the sincere ones who reject their surrendering projects. It thinks that by its barbarism and attacks it will silence the sincere of the people of Palestine, but it is dreaming; for we in Hizb ut Tahrir will not remain silent over its crimes against our brothers whom they arrested and our Blessed Land and the place of Isra’ of our Prophet ﷺ, the PA thought that by arresting of the party’s members it will distract the party from revealing its conspiracies and betrayal of the Palestinian issue. It is dreaming!

Those who have been more oppressive than the PA and its tools have not reduced the determination of the Hizb members at all, and the regimes experienced and tested their will and their determination, regardless of the PA’s oppression and arrogance, it will only inflict hurt against us and it will be shamed in this world and receive the anger of the Ummah, and the torment of the Hereafter is more severe and worse.

We affirm that all the colonial projects, the deal of the century, the two-state solution, the one-state solution, and the like, are all a betrayal of Palestine. All the ranting by the conspirators and their inferior battles will not make any one of them a championship or make it a struggle. Forsaking even a hand span of the land of Palestine is a crime and betrayal, and all of the speeches and slogans in the world will not adorn it, because its ruling descended from above seven heavens.

As for the Blessed Land of Palestine, it is the Muslim Ummah’s issue, it must return to the Ummah’s body, to assume its responsibility towards the Masra (place of Isra’) of its prophet. There are millions in the Ummah and its armies that yearn to cleansing and liberate Al-Aqsa and uproot the Jewish entity from the Blessed Land. We see this day close, will anyone take heed?

“So you see those in whose hearts is disease hastening into [association with] them, saying, “We are afraid a misfortune may strike us.” But perhaps Allah will bring conquest or a decision from Him, and they will become, over what they have been concealing within themselves, regretful.”