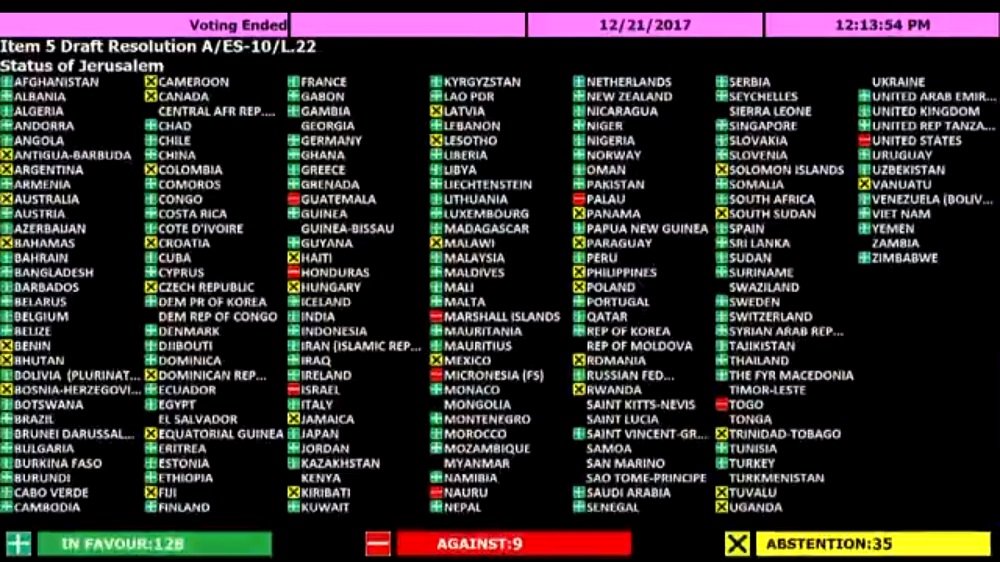 The United Nations General Assembly has delivered a stinging rebuke to Donald Trump, voting by a huge majority to reject his unilateral recognition of Jerusalem as ‘Israel’s’ capital.

The vote came after a redoubling of threats by Nikki Haley, the US ambassador to the UN, who said that Washington would remember which countries “disrespected” America by voting against it.

Despite the warning, 128 members voted on Thursday in favour of the resolution supporting the longstanding international consensus that the status of Jerusalem – which is claimed as a capital for both the Jews and the Palestinians – can only be settled as an agreed final issue in a peace deal. Countries which voted for the resolution included major recipients of US aid such as Egypt, Afghanistan and Iraq.

The headlines all across the world spoke about the triumph of the UN and the OIC (The Organisation of Islamic Cooperation headed by the Turkish president, Erdogan) and the defeat of Trump, concerning his declaration to move the US embassy from “Tel Aviv” to A Quds and the recognition of Al Quds as the capital of the Zionist entity. As a spokesman for Palestine has put it: “The vote is a victory for Palestine.” The question is: Is this really a victory for the Muslims?

Something unusual happened in the run-up to the UN General Assembly. All major Muslim countries actively rallied against Trump’s decision and despite the bold threat of the Trump administration to blacklist and cut off financial aid to the countries who will vote against its decision, almost all Muslim countries, backed the UN resolution against the recognition of Al Quds as the capital of the Zionist entity and thus against US.

This happened while the majority of these countries are directly bonded to the US policy by navel cord and do not have the luxury to argue its policies or its decisions. How is it possible then that these countries who are known for their loyalty to the US and its policies openly contradict it now. Have they finally seen the light, prioritized their Islamic responsibility and resisted against US hegemony all together?

It is worth mentioning that the vote results of The United Nations General Assembly are merely symbolical and not binding. So, effectively voting has no effect whatsoever on the decision of the US (which let to this turmoil). And also, the threat the Trump administration has uttered to cut off financial aid is not a decision it can make since much of US aid funding is allocated by the Congress for specific countries and certain issues. For example, this year the US Senate panel rejected Trump’s budget proposal to cut foreign assistance by more than 30%.

So, both the voting and the threat created a lot of noise but have no tangible effects on the ground.  And thus, resorting to The United Nations General Assembly by these Muslim countries and acting “against” the decision of the US has no consequence to the US decision neither to the financial aid they are receiving.

Moreover, the leaders of the major Arab and Muslim countries had been informed about the decision before Trump made it public. So, the question remains why did the US specifically inform these leaders beforehand? Did it so to ask them for their opinion or merely to inform them? No, this is not plausible since slaves are not asked for their opinion and their actions are taken without a purpose. Or did it so, not knowing what their response would be? Also, this is not plausible due to the fact that the US is feeding them with dollars, and is deeply rooted, and controls the affairs in a lot of these Muslim countries. forehand

Or did it do so to prepare these leaders against the backlash of the Muslim masses in the Muslim world and act as an air-valve to reduce the tensions and to canalise these masses directly to the US plan?  This seems more the case when we take into consideration the longstanding history of these corrupt leaders who proved to be loyal to the US and its policies. In addition, the fact that none of these countries have stated their displeasure before Trump made his decision public but “spoke out” when it became public just confirms this.

So, the most important question is what did these leaders say when they “spoke out” and what is their proposal? The spokesman for Palestine summarized this by saying: “We will continue our efforts in the United Nations and at all international forums to put an end to this occupation and to establish our Palestinian state with east Jerusalem as its capital.”

This is in short, the core of the Istanbul Declaration on “Freedom for al-Quds” of the OIC on the 13th of December 2017.

So, on which point do they differ from US policy?

US is still calling for a two-state solution and Trump stressed that he was not stipulating how much of al Quds should be considered the Zionists’ capital. He said, “We are not taking a position of any final status issues, including the specific boundaries of the “Israeli” sovereignty in Jerusalem, or the resolution of contested borders. Those questions are up to the parties involved.”

So, it seems like these leaders in the Muslim countries are using Islamic sentiments but push US agenda for Palestine.