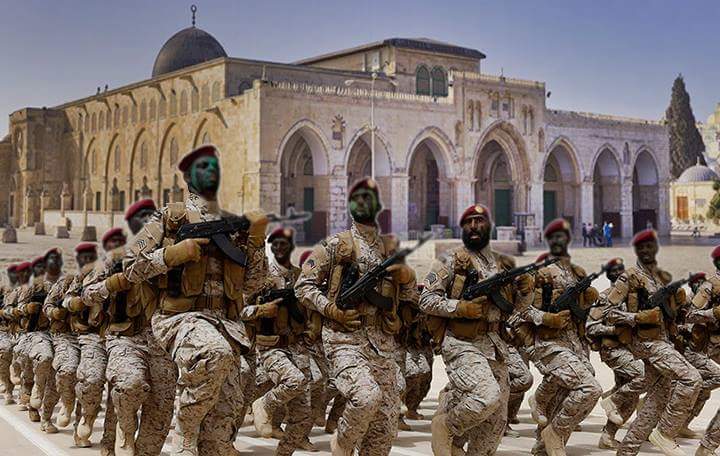 US President Trump announced on Wednesday 6/12/2017 that Jerusalem is the capital of the Jewish entity in addition to setting in motion a plan to move the United States Embassy to Jerusalem, while the Palestinian Authority President Abbas said that these measures constitute a deliberate undermining of all peace efforts, and represent a declaration that the United States has withdrawn from playing the role it has played in the past decades in sponsoring the peace process…

The Muslim Ummah around the world has suffered the ravages of America’s repeated crimes in all aspects of life, occupying parts of the Muslim land militarily, killing hundreds of thousands and displacing millions, and dominating most of the Muslim countries militarily, politically, security and economically, which brought misery and deplorable living and loss of security and safety to the Ummah.

In the blessed land of Palestine, America added a new crime to its crimes against Palestine and its people through Trump’s declaration that Jerusalem is the capital of the usurping Jewish entity for the whole land of Palestine, and what this declaration constitutes of sustaining the occupation and the continuation of the American financial, military and political support for the occupying Jewish entity. This necessitates strengthening Ummah’s convictions of the fact that America is its enemy and a fierce adversary that conspires and plots schemes night and day against it. It also necessitates sweeping it, closing its embassies and eliminating all its influence and its hegemony in the Islamic world.

America would not have dared to take this hostility against the Muslim Ummah if it was not for the humiliating subservience of the criminal rulers and the helpless Palestinian Authority before it. Even more, they opened the countries for it and supported it financially and militarily in its wars against the Ummah and made it the testament to all Muslims issues including the issue of the Blessed Land – Palestine to be liquidated for the benefit of its confederate, the occupying Jewish entity. These rulers, including the President of the Palestinian Authority, who weep over the blessed Jerusalem with denunciation and condemnation only, are the reason of its loss and the cause of the humiliation that we have reached, so that an insolent Kaffir American comes out to us to make it the capital of the terrorist Jewish entity, as if it were one of its farms. He did not care for the incompetent Ruwiabidhah Rulers who owed him his loyalty and gave him the decrees of obedience and submission.

The people of Palestine, as part of the Muslim Ummah, the true owner of the land of Palestine, are fully aware that America is the original enemy and that the Jewish entity is but its spoiled foundling, who it nurtures and cares for him. Therefore, this Ummah never inclined to America and never authorized the Palestinian Authority and the rulers to give up an inch of the blessed land of Palestine, Because Palestine is part of its creed:

“Exalted is He who took His Servant by night from al-Masjid al-Haram to al-Masjid al-Aqsa, whose surroundings We have blessed, to show him of Our signs. Indeed, He is the Hearing, the Seeing.”

The Ummah has realized that its rulers are slaves to America and villains conspiring against it, and it looks forward to a radical solution to the issue of Palestine, which is the movement of the armies of the Ummah, that chant Takbeer and Tahleel to liberate Jerusalem and all the land of Palestine and eradicate the Jewish entity. Moreover, the Ummah, and foremost Hizb ut Tahrir, is actively seeking to restore the authority of Islam and the establishment of the Khilafah Rashidah (righteous Caliphate) on the method of the Prophethood, which will end the influence of America and its domination in the Islamic countries, by expelling it and returning it to its abode overseas and rid the world of its evils, and this will happen soon with Allah’s permission, despite the malice of America and the West.

“O you who have believed, do not take the Jews and the Christians as allies. They are [in fact] allies of one another. And whoever is an ally to them among you – then indeed, he is [one] of them. Indeed, Allah guides not the wrongdoing people. So you see those in whose hearts is disease hastening into [association with] them, saying, “We are afraid a misfortune may strike us.” But perhaps Allah will bring conquest or a decision from Him, and they will become, over what they have been concealing within themselves, regretful.”