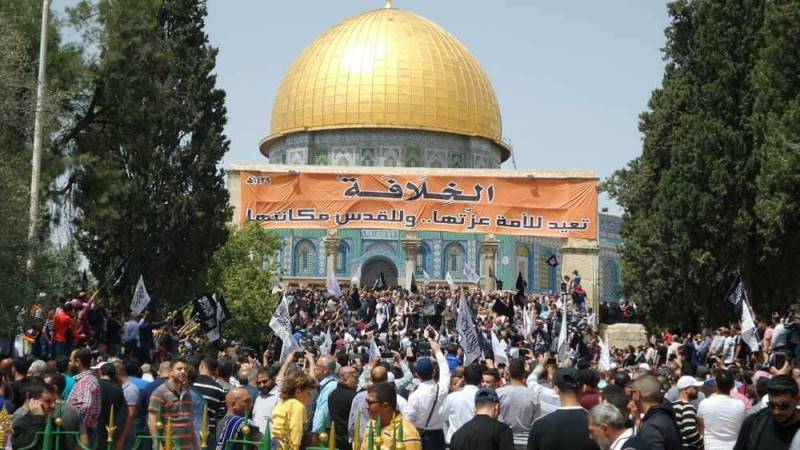 the Khilafah, which was Abolished on 28th Rajab 1342 Hijri

When we ask a question of what type of ummah is our Muslim Ummah, the answer is, it is the Islamic Ummah and the Ummah of wasat. The evidence for this is what ‘Ali Ibn Abi Taalib (ra) wrote and was dictated to him by Muhammad the Messenger of Allah ﷺ in the very first written constitution which the people signed upon when the Messenger of Allah ﷺ made Hijrah from Makkah Al Mukarramah to Al-Madinah Al Munawwarah. The first article in the constitution provided the definition of this Ummah when it stated:  Muhammad ﷺ the Messenger of Allah and those believing Muslims with him are one Ummah to the exclusion of all others. This is the Ummah that Allah (swt) has made the Ummatan Wasatan (The best/just/reference Ummah) meaning the best Ummah raised up for humankind. Allah (swt) says: وَكَذَٰلِكَ جَعَلْنَاكُمْ أُمَّةً وَسَطًا لِتَكُونُوا شُهَدَاءَ عَلَى النَّاسِ وَيَكُونَ الرَّسُولُ عَلَيْكُمْ شَهِيدًا “And as such we have made you the best (just/reference) nation in order for you to be witnesses over mankind and the Messenger a witness over you” [Surah Al-Baqarah 2:143].

It occupies the center stage in the world so that it can fulfill the mission that it has been entrusted with to bear witness over humankind which is exactly the same mission that the Messenger of Allah ﷺ undertook. He was at the center stage of this Ummah; he conveyed the message, fulfilled the trust, was sincere to the Ummah and performed Al-Jihaad in the way of Allah (swt). He ﷺ left in this Ummah a security to protect it from loss and misguidance as he ﷺ said: «تَرَكْتُ فِيكُمْ أَمْرَيْنِ لَنْ تَضِلُّوا مَا تَمَسَّكْتُمْ بِهِمَا كِتَابَ اللَّهِ وَسُنَّةَ نَبِيِّهِ» “I have left you with two matters which will never lead you astray, as long as you hold to them: the Book of Allah and the Sunnah of his Prophet.” (Sahih (authentic) according to Ibn Abd al-Barr, reported by Malik).

The Messenger ﷺ assumed and took charge of this matter throughout his life until he was raised to the best company and this matter was then entrusted and left to his Ummah. So they rose up to this responsibility and Abu Bakr As-Siddeeq (ra) was the first to assume the leadership in this (after the Nabi ﷺ). So he established the witness over the Persians and Romans and then he was followed in this by ‘Umar Ibn Al-Khattaab (ra) who in turn was followed by Khulafaa’ and leaders who firmly established the witness over the people of that time. They were the Ummah Wasat, the number one State and occupied the central stage in the world; they established the proof upon humankind and continued to convey that which the Messenger ﷺ had started. Allah (swt) said,وَمَا أَرْسَلْنَاكَ إِلَّا كَافَّةً لِلنَّاسِ بَشِيرًا وَنَذِيرًا وَلَٰكِنَّ أَكْثَرَ النَّاسِ لَا يَعْلَمُون “And we have not sent you except to the entirety of mankind as a bringer of glad tidings and a warner however most of the people do not know” [Surah As Saba’ 34:28].

So the Ummah carried the Da’wah of Islam and conveyed it to all of the nations of the world from the borders of China in the East to the Atlantic Ocean in the west, from Turkistan, Samarqand and Azerbaijan through central Asia until it reached the gates of Vienna in the middle of Europe and from Gibraltar to Poitiers in France not far from Paris. This reality continued for as long as they were characterized with what Allah (swt) had commanded them with; ordering the Ma’rouf (good) and forbidding the Munkar (wrong). However, after that they turned away from this, weakness crept in and they became distanced from that which they had been ordering and became closer to that which they had been forbidding. As the flame of Imaan weakened within their breasts, they began to misunderstand their purpose in life and the meaning of being Muslims, and their understanding of Islam weakened and their thinking declined and indeed they declined in many areas. Therefore, the diseases of division, backwardness and decline spread amongst them like those of nationalism, tribalism, patriotism, secularism, democracy, freedom and so their State passed by them, so their might was broken and their State was dismantled. Indeed they brought down their State and tore up the banner of their glory and presented themselves at the tables of the other nations taking from them anything they thought that would mend their affairs.

And today we have inherited the results of this whilst what is required is for us to be Shuhadaa’ ‘Ala-n-Naas (To be witnesses over mankind). So is it possible for us to witness over mankind without first establishing Islam in the reality of life? Is it possible to be witnesses over mankind without us first resuming the Islamic way of life or without a State that implements the Hudood, protects the boundaries, looks after the people’s affairs, implements Islam internally and carries Islam to the nations of the earth so as to establish the proof and evidence over and upon them and as such becoming witnesses over them? This is the situation where the Da’wah of Islam has reached all nations, the authority of Islam has spread over the earth, and its rules have manifested and its beliefs and thoughts have been presented clearly, so that no one will have any argument in front of Allah and this is the meaning of bearing witness.

We have inherited this predicament and we are more than a billion Muslims in more than fifty-seven states and Islam has no authority in any of them. Indeed, it does not even have a presence in the general life of the people as the believers from amongst the individuals have restricted Islam to the ‘Ibaadaat and Akhlaaq (except for the one whom Allah has been merciful upon) and the societies are dominated by Capitalist and Socialist thoughts. They are plagued by the grip of patriotic, nationalistic and spiritualistic feelings and sentiments whilst the States are governed by Capitalist systems. An even greater calamity than this is that all of these states without exception proceed in line with the commands of the disbeliever and his agents.

In addition, the politicians and political party blocs with their different directions compete and battle to attain cheap political gains and to realize temporary and selfish goals without fundamentally knowing anything about the process of becoming Ummah of Wasat (Best/Just/Reference – Nation) and without seeking to clarify a path towards achieving it. They did not possess more than slogans for general unspecific thoughts and they did not present or put forward a method that would in the very least explain what they wanted the Ummah to move towards and to become Ummah of Wasat upon its basis. Just as they did not clarify a methodology for this work and merely proceeded upon protests, the raising of slogans and inclining towards the rulers and flattering them or opposing them and being hostile to them whenever the situation dictated that, whether this was to secure an interest or to please, appease and satisfy the opinion of street at a given time. In doing so, they taught the people that politics meant deception, misleading, hypocrisy and flattering in order to arrive at the goals and realize their hopes and aspirations. And even worse than this was their view that it was obligatory to seek the help and assistance of the disbeliever (which is opposite to the concept of ummah of wasat) to realize their ends and aims and arrive at the purposes or in the very least they did not see anything wrong in doing that and without knowing that this meant political suicide.

And also sadly, today we witness some amongst the Ummah (scholars and dawah activists) who have interpreted the term ‘Ummathan Wasatan’ based on modern interpretations that give in to the current reality, and that emanate from a defeated mindset and from the culture of surrender to the enemy. They said that “Wasat” means to be somewhere between extremism and giving in. Some said that “Wasat” is meant in a geographical sense, related to our physical location, atmosphere and bearings. And some even established “Wasat” political parties, called “Hizb Al-Wasat”, where their policies were somewhere between being “religious” and secular. In this manner, the meaning of this word became confused amongst the people, and the correct could not be distinguished from the incorrect, and thus the matter now requires re-explanation and clarification. We need to set the spotlight on it once again, so that we can know its reality clearly, and understand its meaning correctly, where its image in one’s mind becomes clear, accurate, and removes all misunderstandings from it.

This is, therefore, what we have inherited and this is the reality of the Ummah now which we desire to work with in order to make it the Ummah of Wasat. Thus, the only path to returning the Islamic Ummah to implementing the true meaning of “Wasat” is through their return to ruling with what Allah has revealed, resuming the Islamic way of life by re-establishing the true State of Islam, the Khilafah; only then can this honorable Ummah be described as the best Ummah, the Ummatann Wasata, the Ummah of Justice, the Ummah of reference, the carrier of the true and great message of Islam to the world.