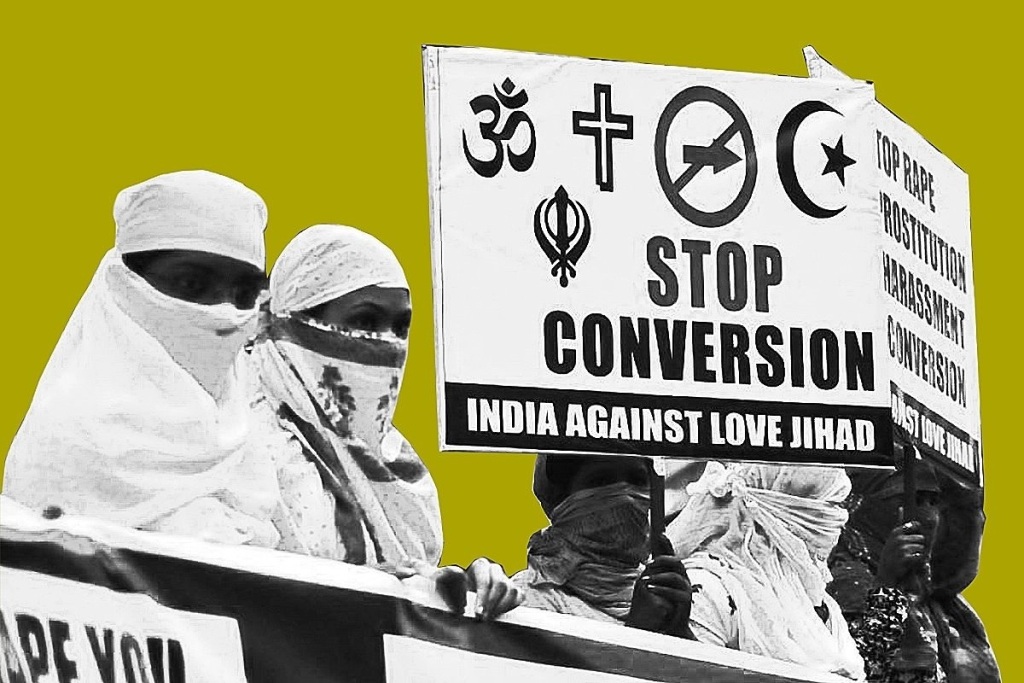 Lucknow, India: Days after approaching the Union Law Ministry for the proposed law against ‘love jihad’, the Uttar Pradesh Cabinet, on Tuesday, cleared the ‘Love jihad’ ordinance. The ordinance provides for a jail term of 1-5 years with Rs 15000 penalty for forceful conversion. While passing the ordinance, the UP government said that more than 100 cases were examined before bringing the ordinance. (Source: times now news)

The whole fictional drama of “Love Jihad” is created by the BJP (Bharatya Janata Party) and the Sangh Parivar and last time. When BJP exploited it politically, it resulted in the killing of 62 people and displacement of more than 50,000 Muslims in 2013. India proudly claims to be the largest secular country which offers equal rights to all citizens ‘irrespective of faith, caste, creed or colour’, but nurtured negative sentiments between Hindus and Muslims and turned them into sworn enemies. BJP workers took an active part in spreading rumors and triggered distrust in local Hindus against Muslims. Multiple fake videos were made and circulated on WhatsApp claiming that madrassas are training young Muslim boys to lure and then later convert the Hindu girls to Islam and they are getting support from neighboring Muslim country. Even though Article 21 of the Indian Constitution allows the right to marry a person of one’s choice, BJP workers claimed that this is a conspiracy to slowly turn the Hindus into a minority. Meanwhile the Allahabad High Court has denounced a previous single-judge bench decision that religious conversions only for the sake of marriage are unacceptable, saying that decision was “bad in law”.

The Narendra Modi Government has never been discreet regarding its hatred for the Muslims and the term “love jihad” is also a shameful creation of this hatred, because of this, at least for the time being, the Narendra Modi government at the Centre, currently facing its most difficult period, has been fairly successful in deflecting attention from the public scrutiny of its many-sided failures to contain a raging epidemic, widespread economic distress and steeply-rising unemployment and it does not concern the government what price will be paid by the innocent people. The irony is that even after knowing that investigations have brought nothing forward, and the Allahabad High Court has also denounced the previous single-bench judgement regarding conversion for marriage, the UP Cabinet has cleared the ‘love jihad’ ordinance.

Islam is such a powerful religion that even in minority it is a threat to the enemy. Conversion of a few Hindu girls has shaken the Hindu radical groups and they have become active against Muslims. Islam, portrayed as a threat to humanity everywhere, is in fact its savior if implemented. It honours women and that can be a big attraction for the women belonging to a religion like Hinduism, where women are treated as commodity. Islam does not believe in forced conversions but it certainly believes in becoming an attraction for the people through implementation. We have the example of the Prophet Muhammad’s daughter Zainab, who separated from her husband even though they loved each other because the verse came forbidding the marriage between a Muslim and a polytheist. He later embraced Islam not because of any pressure or greed but because he witnessed the strength and purity of Islam. We need the shade of Khilafah (Caliphate) to portray the true picture of Islam and only then we will see people embracing Islam in numbers and certainly the Khilafah will provide them with the security that only a powerful state can provide.

“And say: ‘The Truth (has now come) from your Sustainer: let, then, him who wills, believe in it, and let him who wills, reject it.’ Verily, for all who sin against themselves (by rejecting Our truth) We have readied a fire whose billowing folds will encompass them from all sides; and if they beg for water, they will be given water (hot) like molten lead, which will scald their faces: how dreadful a drink, and how evil a place to rest.” [18:29]