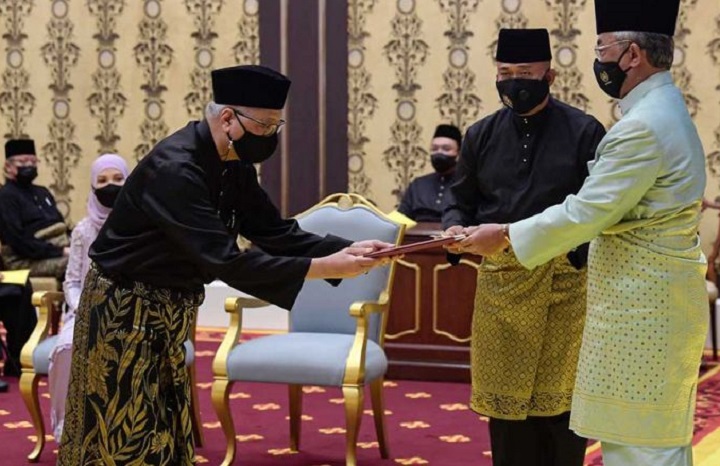 On 21st of August, Datuk Seri Ismail Sabri Bin Yaakob was sworn in as the ninth Prime Minister of Malaysia. Ismail Sabri, who is also the Vice President of UMNO, succeeded the throne following the resignation of Tan Sri Muhyiddin Yasin who had lost the majority after an unstable 17 month-rule. It is known that the reason behind the loss of Muhyiddin’s majority was the withdrawal of support for him by 15 UMNO parliamentary members, led by its own President. This is UMNO’s political game, who dares to do anything in order to “seize” power from BERSATU despite the fact that both are sharing power.

What is clear is that Malaysians in general, who are already nauseated by dirty politics in this democratic system, have become sicker with the unceasing power struggle since the “Sheraton Move” early last year. This tragedy of the return of UMNO to power adds to the already long list of deceptions of democracy in Malaysia. UMNO that has been tremendously rejected by the people in the previous 14th General Elections, now returns to power without election and without the mandate and support of the people. What a tragedy! Political parties that have lost in the elections can still be in power in the name of democracy! Believe it or not, this is what’s happening! In the power struggle which has been going on for over a year, the corrupt parties remain in power whilst the people remain as victims in their game, played in a system which is said to be from the people, by the people and for the people!

Oh Muslims! Do realize that democracy and ‘democratic elections’ are nothing but lies and illusions that promise an elusive change. The stark reality in front of our eyes today is that any person and any party can rise to power without an election and without any democratic process. This has been admitted by the democratic political players themselves – that they rose to power by “boring a hole through the roof” (not through election). Their success in this ‘democratic’ playground is merely due to a game of numbers. In this lottery frolic, merit, honour, integrity, piousness (Taqwa), and even faith (Iman) play no significant role; what is important are the numbers. Whomsoever possess the numbers (majority) in parliament, then the power belongs to him, even if he is rejected by the people! And numbers can be purchased quite easily, subject to an offer and an acceptance, or a threat.

Yesterday (27/08/2021), Ismail Sabri announced his cabinet line-up and as expected there is not even an atom of surprise. The cabinet is merely a reshuffling of the past cabinet with some insignificant changes – a recycled cabinet from the previous government that had failed!

With the newly appointed Prime Minister from UMNO and his recycled cabinet, the important question for the people now is, will there be real change that the people all this while, hoped for? The answer to this question is very simple – look at the track record of UMNO that has ruled for more than 60 years in Malaysia. Has UMNO ever changed in the last 6 decades? Have the UMNO leaders’ thoughts and attitude ever changed in the last 60 years? The answer is surely known to the people.

Since independence, Malaysia has been ruled by eight Prime Ministers, all of whom were born from the womb of UMNO. One element that has never changed in their ruling is that, the same secular-democratic system, a legacy of the colonialists, has been implemented zealously. These Prime Ministers preserve and protect the system, constitution and laws granted by the colonists. They have never exerted themselves to implement the laws of Allah (swt). Henceforth, with the appointment of the 9th Prime Minister who was also ‘UMNO born’ and clearly showing his commitment in preserving the legacy of the colonial system, constitution, and laws, as did his predecessors, can real change be expected, especially in the form of a total implementation of Islam? Despite having Parti Islam SeMalaysia (PAS) sharing in power, hope for change is practically dashed based on the previous track record of PAS in the government. PAS has clearly manifested that it is willing to conspire and support leaders and parties that do not abide by the Al-Quran and As-Sunnah.

Hizb ut Tahrir hereby would like to remind the new Prime Minister of Malaysia and his cabinet, that the power bestowed upon them by Allah (swt) is a trust (Amanah) to implement His (swt) laws (Hukm) comprehensively (Kaffah), nothing less than that. Thus, the responsibility is on their shoulders to implement the Hukm of Allah (swt) comprehensively, without compromise and without excuses. Rejoice to those who fulfil the said trust in this world and Hereafter; woe and great torment to those who betray it. Hizb ut Tahrir would also like to remind the Muslim Ummah that the true change will never take place except when this Ummah rejects the leaders and the democratic-secular system of the colonial mould, and works to appoint a Caliph who will implement the Hukm of Allah (swt) comprehensively under the shade of the Khilafah Rashidah (Righteous Caliphate) upon the method of the Prophethood.