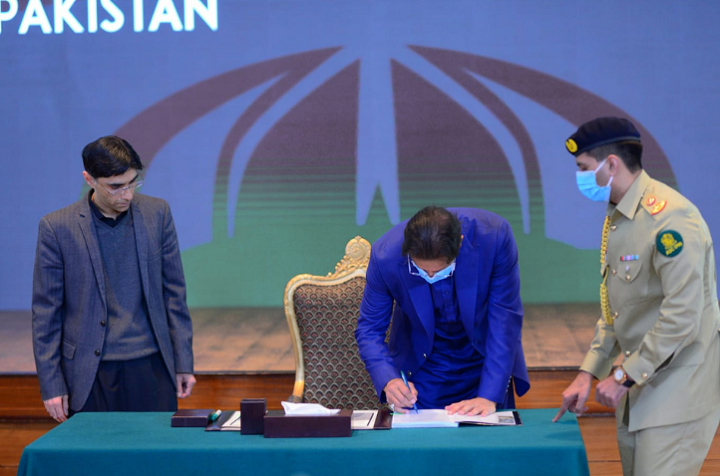 On 14 January 2022, Pakistan’s first ever National Security Policy (NSP) was unveiled, claiming to set Pakistan on the path of progress, security and development. The NSP conveys a clear message to Western powers that Pakistan’s rulers have changed Pakistan’s previous course, established over decades. The NSP abandons seeing security through the lens of rivalry with the hostile, Hindu-dominated, India. Instead, Pakistan is to be tied even more strongly to the Western world order.

The NSP’s call for “comprehensive national security” and “geo-economics” ties Pakistan’s security and economy to the international order, determined by Western laws and institutions. The NSP states, “As Pakistan supplements its geo-strategic focus with an added emphasis on geo-economics, it envisions itself as a melting pot of global economic interests offering economic bases to its partner countries for development partnerships.” By tying Pakistan even more strongly to foreign economic interests, as well as the granting of economic bases for foreign powers, the NSP merely deepens economic colonialism. If implemented, the NSP will only worsen the subjugation of Pakistan to the interests of the world’s major colonialist powers, China, the US, Russia, Britain and France.

Practically, deepening Pakistan’s integration within the colonialist world order will yield neither preservation of identity nor security nor prosperity. In exchange for granting GSP Plus status to Pakistan, the EU demanded legislation promoting Western values and interests. In exchange for access to interest-based loans, FATF ensured that Pakistan’s rulers crack down on groups fighting to liberate Kashmir from Indian occupation, as well as appeal to the Western allies of Modi to determine Kashmir’s future. Alongside opening access to loans that worsen Pakistan’s enormous interest-based debt, the IMF imposes economically destructive conditions that drown us in inflation, poverty and unemployment. Far from ensuring development, the tying of Afghanistan to the Western economic order, through the Doha Accords, ensures its humiliating collapse, serving as a stern warning of the consequences of being shackled to the Western world order.

O Muslims of Pakistan in General and their Strategic Community and their Armed Forces in Particular! Reject the NSP, which aims to waste our enormous resources and capabilities upon serving American interests in the region. Ensure a course for the Islamic Ummah that is independent of subjugation to the major colonialist powers, through the re-establishment of the Khilafah (Caliphate) on the Method of Prophethood. Under the Khilafah, the Deen of Islam was the basis of a powerful identity, unifying peoples from diverse ethnicities and cultures into a single, vast Ummah. It is the Khilafah that ensured security by mobilizing the unified military forces of the Muslims to liberate occupied lands and open new lands to Islam, forcing hostile powers into retreat. It is the Khilafah that ensured prosperity by gathering the immense resources of the Islamic Ummah, ensuring their circulation throughout society through Islamic Shariah rulings. End reliance on the kuffar, their institutions and their laws, by supporting the Deen of Allah (swt) and its state, the Khilafah. Allah (swt) said,

“And Allah will surely support those who support Him. Indeed, Allah is Powerful and Exalted in Might” [TMQ Surah Al-Hajj 22:40].