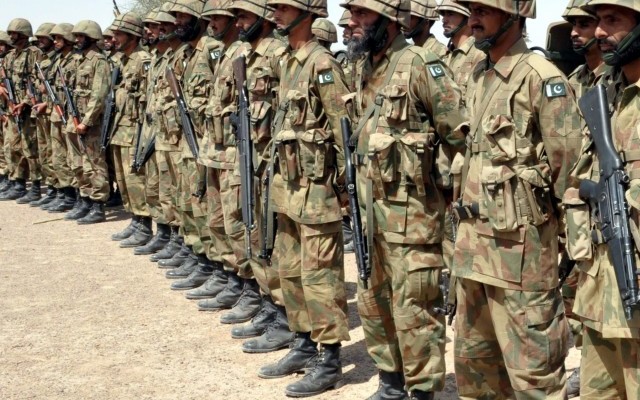 Every great nation has red lines that must never be crossed. Consequently, the great nations, especially the ideological nations, take care of their military strength as well as their ideology. Great nations take measures that will protect, spread and ensure domination of their respective ideologies and they employ their military power to achieve this. So states simultaneously employ political, military and ideological powers. However, with the advent of the capitalist ideology and its pragmatic thinking, bargaining on the red lines of states and nations has become the practical way of dealing with internal and external threats. This began with the hostility on sanctities, their desecration and extended to the violation of honor. Now, people witness these violations of sanctities and honor on television, as if they were watching a documentary or movie. And these scenes do not move the international or popular community to lift a finger, except to the extent that is required to release pressure upon them, when enough is enough. It is not an exaggeration to say that the modern Western pragmatic way of thinking is the lowest way of thinking in humanity. It kills the ability of the mind to judge reality and to take the correct, firm stances, particularly at a time when it is mandatory to act quickly and decisively.

The Islamic Ummah was the only nation in history that gave the human mind its due regard and respected the sanctities of nations, such that it became a striking example, in both ancient and modern history. Examples of this in Islamic history are numerous.

One example is the way RasulAllah ﷺ dealt with the Quraysh over the Hudaybiyah Armistice Treaty, when the Quraysh violated one of the terms of peace by supplying its allies Bani Bakr with weapons and assisting them with money and men in their fight against the allies of the Prophet ﷺ, Bani Khuza’a. One of the conditions of the Hudaybiyah Armistice Treaty was that the tribes surrounding Makkah had the freedom of choice to join in protected contract with either RasulAllah ﷺ or the Quraysh. The Bani Khuza’a chose to enter into the contract of RasulAllah ﷺ and his covenant, and Bani Bakr chose Quraysh and their covenant. So, it came to pass that the men of Bani Bakr attacked Bani Khuza’a and the Quraysh assisted Bani Bakr. Subsequently, Amr ibn Salim Al Khazaa, the leader of Khuza’a, came to RasulAllah ﷺ to inform him about the treacherous attack of Bani Bakr, with the help of Quraish, in a treacherous attack, which violated a condition of the terms of the Hudaybiyah Armistice Treaty. He came to Madinah and stood at the head of the Messenger of Allah ﷺ in the Al-Masjid An-Nabwi and asked him for help, proclaiming,

By the treaty upon our father and his father, most honored

They have attacked us by surprise

And they have killed us whilst bowing and prostrating”

The open violation of the armistice with RasulAllah ﷺ by the Quraysh, was enough for RasulAllah ﷺ, as the practical head of the army as well as the ideological and political leadership, to mobilize the army of Muslims. Moreover, this mobilization was not to merely rehabilitate Khuza’a and demand an “apology” for the betrayal, but to lay waste to the fortresses of Quraysh and open Makkah. And this was when Makkah in the Arabian Peninsula was amongst the Arab tribes as Washington is now.

Another example which indicates the lack of compromise of Muslims in the attack on their dignity, is the incidence of Bani Qaynuqa.’ One of the Jewish men from the tribe of Bani Qaynuqa’ revealed the nakedness of a Muslim woman. A Muslim saw him in the market and killed him for the honor of that single Muslim woman. Then, the many Jews who were in the market, martyred him and matters escalated. When this news reached the Prophet ﷺ, without hesitation he ordered the mobilization of the armed forces. This was not merely to collect the blood-money of the Muslim who was killed or ask for an apology for the woman who was assaulted, but to besiege the tribe, after which he ﷺ ordered their expulsion.

As for the case of the treachery of Bani Quraydah, wherein the ruling of Sa’ad ibn Muadh (ra) was nothing but a ruling rooted in the Islamic values, and was equivalent to the sanctity of Muslim blood and its honor. He sentenced upon them the killing of their men and the captivity of their women and children. This was not a sentence from a man who had an old vendetta against the Jews. His ruling was consistent with the core of the teachings of noble Islam, such that the Revelation approved the ruling, with the Hadith of RasulAllah ﷺ,«لَقَدْ حَكَمْتَ فِيهِمْ بِحُكْمِ اللَّهِ مِنْ فَوْقِ سَبْعِ سَمَوَاتٍ» “You (Saad) have judged amongst them with (or similar to) the judgment of Allah from above the seven heavens.”

The honorable examples of defending red lines in the history of Muslims are numerous. At that time, the Ummah and its armies adopted resolute stances that required war regularly, from the apostasy wars to defend the Aqeedah of Islam, through to the opening of lands, such as the Opening of Amouriah because of the appeal by one of the female prisoners of Rome from amongst the free Muslims, and the opening of Sindh because a pirate attacked one of the Muslim ships in the open sea and so on. However, that was when the Muslims had a political entity and the head of that entity was a political, military and ideological leader. So this was when the Islamic ideology was the guide for the Ummah and its state, and it was the Islamic legal rulings that were applied on realities, demanding firm stances.

Indeed, the absence of Islam from the governance of the Ummah and that of the Islamic Aqeedah from the military doctrine of the Muslim armies, as well as the substitution of agent rulers installed by the West over the heads of the Ummah to govern by kufr and of nationalistic and patriotic prejudices in the military doctrine of the Muslim armies, are the two reasons that the the rulers of the Muslims and their armies not move a finger to defend the sanctities of the Muslims. This is the case regarding Palestine, Kashmir, Syria and Burma now or previously in Bosnia-Herzegovina amongst others. If only the Ummah had, in these times, a leader like the Prophet ﷺ, or a Khalifah like Abu Bakr (ra), Umar (ra) and Mutasim (ra), they would never accept in the affair of the Jews, except what the Shara’ of Allah had ruled for them, as stated in the hadeeth of the Messenger (saw), «تُقَاتِلُونَ الْيَهُودَ حَتَّى يَخْتَبِيَ أَحَدُهُمْ وَرَاءَ الْحَجَرِ فَيَقُولُ يَا عَبْدَ اللَّهِ هَذَا يَهُودِيٌّ وَرَائِي فَاقْتُلْهُ» “You (i.e. Muslims) will fight with the Jews until some of them will hide behind stones, the stones will (betray them) saying, ‘O `Abdullah (i.e. slave of Allah)! There is a Jew hiding behind me; so kill him.’” And they would never accept regarding the Buddhists less than that. They would not have accepted from the America, except what the Prophet (saw) accepted from the Quraysh at the Opening of Makkah. And they would not have accepted from the Russians except what Sa’ad ibn Muadh ruled for the tribe of Bani Quraidah and the Opening of Moscow … and any acceptance less than that is renounced by Islam as shame, humiliation and pragmatism, all of which are incompatible with Islam. Allah (swt) said, وَلِلَّهِ الْعِزَّةُ وَلِرَسُولِهِ وَلِلْمُؤْمِنِينَ وَلَكِنَّ الْمُنَافِقِينَ لَا يَعْلَمُونَ “And to Allah belongs [all] honor, and to His Messenger, and to the believers, but the hypocrites do not know.” [63:8]