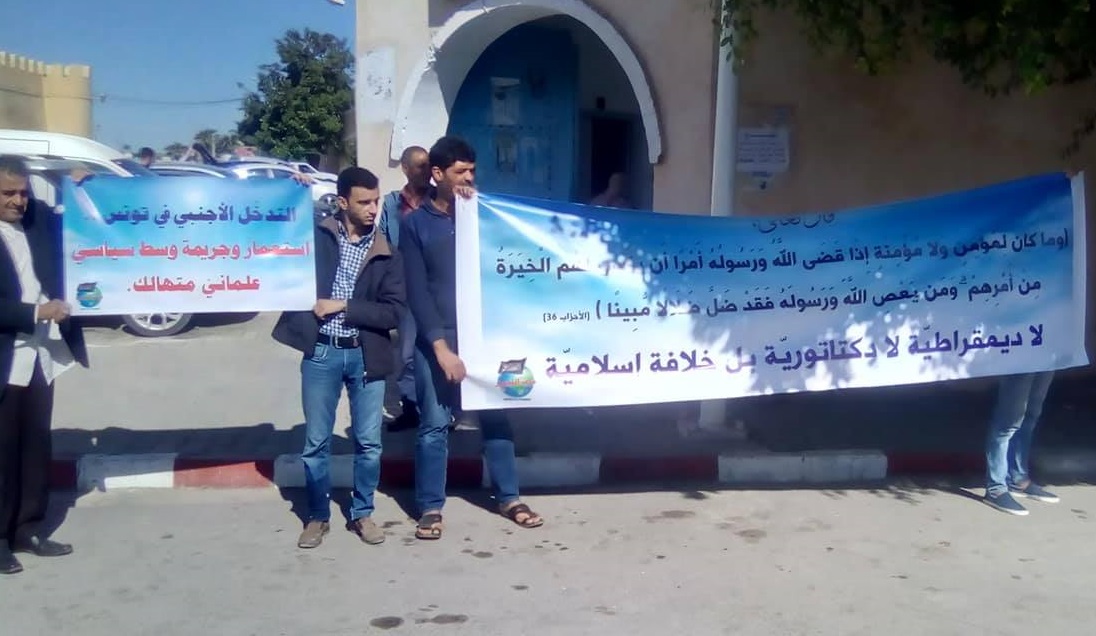 On Friday, 15/10/2021, Hizb ut Tahrir / Wilayah of Tunisia organized a picket in front of Al-Fatih Mosque in the capital. This picket was a call to the people of Tunisia to stop the secular tampering with the fate of Tunisia, in order to end the struggle of the secularists by proxy on behalf of their European masters in our land and in our country. In the picket the party raised the banner of the Messenger of Allah (saw) and the slogans were verses from the Book of Allah, including Allah’s saying:

“O you who have believed, obey Allah and obey the Messenger and those in authority among you. And if you disagree over anything, refer it to Allah and the Messenger” [An-Nisa’: 59]

These are decisive verses from the Noble Book of Allah, which indicate definitive evidence of the obligation to rule by what Allah has revealed and the necessity of having a successor (Caliph) to the Messenger of Allah who governs people by the law of Allah (swt).

As is the habit of secularists in lying and forgery, their trumpets blaring with lies went out claiming that members of Hizb ut Tahrir stormed Al-Fatih Mosque by force and broke the pulpit, and that the security forces surrounded the mosque; in a desperate attempt to mobilize public opinion, and antagonize the authority to prevent Hizb ut Tahrir from speaking. The Ministry of Religious Affairs was quick to comment; it issued a cold and feeble statement in support of the liars. The Minister of Religious Affairs spoke in a press conference in Kairouan on Saturday, 16/10/2021, commenting on Hizb ut Tahrir’s stance in front of Al-Fatih Mosque in the capital.

He said that a certain group deliberately created confusion and raised various slogans, he meant Hizb ut Tahrir. The Minister of Religious Affairs denied that the Imam of the mosque was involved in what took place in the mosque and said, “The Imam is innocent of that, like the wolf is innocent of the blood of the son of Jacob.” The minister claimed that the party wanted to mobilize the worshipers and failed to do so, and said: “Mosques were not made for this, mosques belong to Allah, so do not invoke anyone with Allah. And he called for separating mosques from any political agenda,” he said: “We will not accept imposing any political agenda in the house of Allah.”

1-  The Minister of Religious Affairs sides with the secularists and supports the lies. Instead of exposing the lies of the secularists and their plots, he went on to justify what happened and presented a report to the secularists summarizing what the Imam who gave the sermon said on the pulpit, to prove that the Imam and the Ministry have nothing to do with what Hizb al Tahrir calls for. Then he attacked the party and its call with tottering fatigued secular statements.

2-  The Minister cited as evidence the verse:

“That the masjids are for Allah, so do not invoke with Allah anyone” [Al-Jinn: 18].

“May Allah destroy them; how are they deluded” [Al-Munafiqun: 4]

4- Doesn’t the minister who claims to be a graduate of Ez-Zitouna University know that the establishment of the Khilafah (Caliphate) is an obligation (Fardh) from Allah and Wajib?! If mosques were not for the purpose of calling to Allah and implementing Allah’s rule, then what were they made for?! The Messenger of Allah (saw), took the pledge of allegiance to rule in the mosque, and the Rightly-Guided Caliphs took the pledge of allegiance to his succession in the mosque, and Hizb ut Tahrir today calls for the Khilafah in front of the mosque and will continue to call for it; because it is an obligation by Allah (swt) on all Muslims.

And let the minister and his government and its president know that we do not include them on our agenda, for they are nothing but a passing entity. Rather, we aspire to eliminate their colonial masters who controlled Muslims and the world, subjected them to various types of slavery and misery, to rid all humanity of their crimes, for we are the bearers of a great message, that is Islam. And we pray to Allah (swt) to support us to establish the Deen and elevate its edifice so that it dominates over all ways of life, even if the disbelievers hate it.

And the second Khilafah Rashidah (rightly-guided Caliphate) on the method of the Prophethood that we have vowed to establish, its time has come, Allah willing, and whoever is in doubt about it, let him listen to the words of Allah (swt):

“Whoever should think that Allah will not support [Prophet Muhammad] in this world and the Hereafter – let him extend a rope to the ceiling, then cut off [his breath], and let him see: will his effort remove that which enrages [him]?” [Al-Hajj: 15].