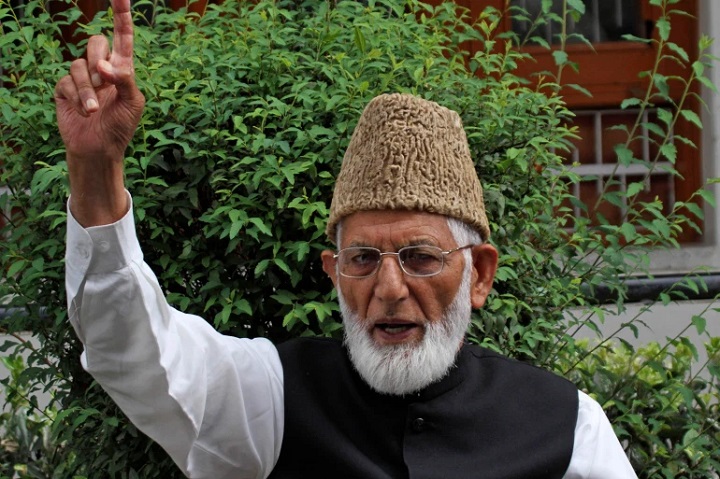 “To Allah we belong and to Him we shall return.” [TMQ Surah Al-Baqarah 2: 156]. Defiantly rejecting the occupation of Muslim Land since the sixties of the last century, Syed Ali Gilani was under house arrest by the Indian occupation forces for the last eleven years, which had taken heavy toll on his health, culminating in his blessed martyrdom. The popular slogan ‘Hum Pakistani Hain, Pakistan Hamara Ha,’ “We are Pakistani and Pakistan is ours,” was coined by Syed Ali Gilani, demanding the liberation of Occupied Kashmir and its annexation with Pakistan.

“Among the believers are men true to what they promised Allah. Among them is he who has fulfilled his vow [to the death], and among them is he who awaits [his chance], and they did not alter [the terms of their commitment] by any alteration.” [TMQ Surah Al-Ahzaab 33: 23].

We pray that Syed Ali Gilani is raised with the Prophets (as), the martyrs and the siddiqeen, for there is no loss for the believer who is patiently upright on Truth. Moreover, the martyrdom of Syed Ali Gilani is not for mourning, with flags raised at half-mast, but it must inspire Takbeers announcing Jihad and the raising of the flag of Kalima, by the fighting battalions of our armed forces. Syed Ali Gilani was true to what he promised Allah (swt), fulfilling his vow to the death, whilst that beautiful chance awaits those officers in our armed forces now, who obey the command of Allah (swt) and His Messenger (saw), by fighting until the Indian occupation is ended.

Indeed, the defeat of the US and its Western allies in Afghanistan was at the hands of poorly-armed mujahideen, by the Nasr (victory) of Allah (swt), so there is nothing to prevent you from defeating the demoralized and divided Indian Army, by that same Nasr. Moreover, the arrogance of India is merely the shadow of the US regional presence, which has faded and can be made to disappear forever, under a leadership loyal to Allah (swt) and His Messenger (saw). Uproot the current rulers of Pakistan, who treacherously surrendered Occupied Kashmir to Modi on 5 August 2019, and grant your Nussrah to Hizb ut Tahrir for the re-establishment of the Khilafah (Caliphate) on the Method of the Prophethood. It is then that the US regional presence will be made to disappear for good, starting with the closure of its air and ground supply lines and its spy-centers in the diplomatic missions on our soil. It is then that the borders that the colonialist drew on maps to divide and rule us will be wiped out, as the Muslim states are unified, one after another, under a single Khaleefah. It is then that the Islamic Ummah will be unified as the world’s most powerful state, forcing the retreat of all those who have waged wars of occupation for so long, whilst opening their own lands to the light and mercy of Islam.