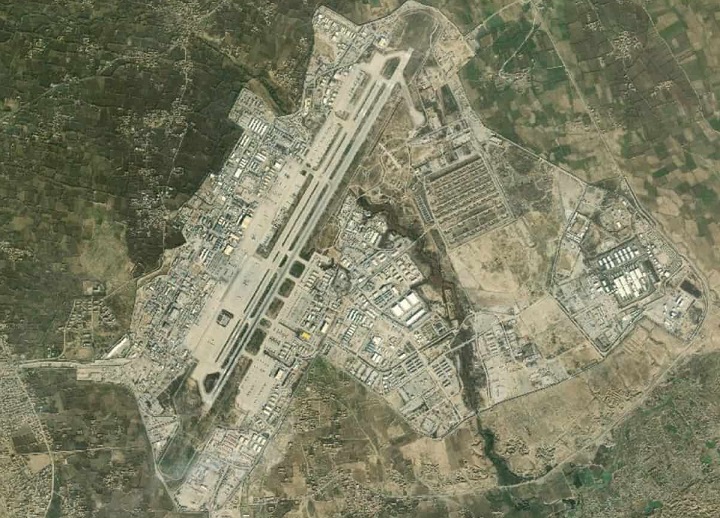 In an article published on the 5th July, the US announced that it had left Bagram Air Base. The website Al Jazeera reported1 that, “The United States left Afghanistan’s Bagram Airfield after nearly 20 years by shutting off the electricity and slipping away in the night without notifying the base’s new Afghan commander, who discovered the Americans’ departure more than two hours after they left, Afghan military officials said.”

The US forces vacated Bagram Airfield without even informing their Afghan National Army counterparts. So the US force had been humbled, leaving in the middle of the night like thieves, fearing an attack from the Taliban. The departure of the US forces is a great victory for the sincere Mujahideen of the Taliban forces, for Allah (swt) has given victory to those who have fought sincerely in his path.

The contrast is clear for all to see. It is the rulers of Pakistan that deprived Pakistan’s armed forces of the honor of this victory, despite their atomic weapons, their JF-17 Thunderbird, their F-16 Block 52, their Khalid tanks and beyond, the Wah Military Complex, the SAAB AWACS, the P5-Orion planes, the nuclear tipped submarines and beyond. On the fateful day when General Musharraf chose to side with the disbelieving US, he shut the doors of victory for Pakistan Army. So, Allah (swt) gave victory to those who had Iman, were on the battlefield and used whatever was in their means to fulfil the hukm of Jihad. For the sincere members of the Pakistani armed forces, if they engage in some deep soul searching, as to why Allah (swt) did not give them victory, the answers are clear. Allah (swt) said:

“You (O Muhammad SAW) will not find any people who believe in Allah and the Last Day, making friendship with those who oppose Allah and His Messenger (Muhammad SAW ), even though they were their fathers, or their sons, or their brothers, or their kindred (people). For such He has written Faith in their hearts, and strengthened them with Ruh (proofs, light and true guidance) from Himself. And We will admit them to Gardens (Paradise) under which rivers flow, to dwell therein (forever). Allah is pleased with them, and they with Him. They are the Party of Allah. Verily, it is the Party of Allah that will be the successful.” [TMQ Surah al-Mujaadilah 58:22].

So the claim that Pakistan had a hand in the Taliban victory contradicts has no substance in the light of this evidence. We find no divine evidence for their playing the double game, as they claim they did, even though it is clear that they were fully siding with the US in all its efforts. We find no divine evidence allowing Muslims to support the US with supply lines, so that the US can then engage in military combat with the mujahideen. Allah (swt) categorically equates belief with not making friendship with those who oppose Allah (swt) and His Messenger. So, either Pakistan’s military leadership does not regard the US as from those “who oppose Allah(swt) and His Messenger(saw)” or they consider that they can violate the verse, support the kuffar against Muslims and still claim victory from Allah (swt).

Given this so-called political acumen of the Pakistani leadership in playing the double game, let’s examine the same principle of the double game on their border with India. On 5th August 2019, India revoked article 370 to fully occupy Kashmir. We don’t see the Pakistani leadership play the double game there, or even claim that it was doing so. We don’t see support for the Kashmiri groups for an armed uprising against the Indian troops. Instead we see a stark betrayal, all the more stark in view of the fact that the Pakistani leadership supported the armed resistance there in the past. Indeed, India is not a military power in the league of the US, so it would be easier to bring the Indians to their knees. On the contrary, we only see support for the Indian occupation by preventing Muslims from crossing the line of control. Furthermore, commitment to support for the Indians was such that the Pakistani leadership kept the Line of Control stable during India’s conflict with China. As reported2, India was able to move troops from the Kashmir conflict to the Chinese border, indicating their confidence that Pakistan will not increase the tension on the border. So one can see that the claim of a double game was not made.

“Verily, you will find the strongest among men in enmity to the believers (Muslims) the Jews and those who are Al-Mushrikun, and you will find the nearest in love to the believers (Muslims) those who say: ‘We are Christians.’ That is because amongst them are priests and monks, and they are not proud.” [TMQ Surah al-Maidah 5:82].

The verse describes the Mushriks as those who will have the most enmity against us, yet we find that the Pakistani leadership has not even tried to initiate a double game. Instead General Bajwa appealed to the Mushriks to “bury the past” and move ahead with regional integration. So again, either the Pakistani leadership does not regard Modi and the BJP as Mushriks, or it is contradicting the verse of Quran.

One wonders how the Pakistani leadership can confidently talk about not allowing the Indians space in Afghanistan, when they have given the Indians complete freedom in Kashmir and beyond. Even the claim of not giving Indians space in Afghanistan is a lie. It was none other than the National Security Adviser to the Prime Minister of Pakistan, Moeed Yusuf who in an interview accused the Indians of funding terrorist attacks in Pakistan, specifically the Army Public School massacre. If the Pakistani leadership cannot even prevent the Indian consulates in Afghanistan from initiating such brazen attacks, then under what logic can they even claim that they have prevented the Indians from operating in Afghanistan? News reports3 showed pictures of large amounts of Pakistani currency found within Indian consulates. So, before the Taliban takeover, the Indians were operating with impunity. It is really the rise of the Taliban that has been instrumental in the departure of the Indians from Afghanistan.

It is the hypocrisy within the minds and hearts of the Pakistani leadership that has required them to issue such misleading narratives. The Pakistani leadership is trying to deflect from the obvious treachery that they made when they sided continuously with the US, acting as proxies for the US against the Taliban, exerting all forms of pressure on the negotiators of the Taliban.

Today we are where we were twenty odd years ago, just before the events of 9/11, but with a difference. The Taliban have been victorious against the US, insistent on their demand for exit of all US troops, and the Pakistani leadership has successfully shown its true hypocritical face. The hukm of Allah (swt) will come to pass, the Khilafah (Caliphate) on the Method of Prophethood will be established by His Permission, despite the efforts of the Kuffar and the treacherous rulers. Allah (swt) said,

“They (the disbelievers, the Jews and the Christians) want to extinguish Allah’s Light (with which Muhammad SAW has been sent – Islamic Monotheism) with their mouths, but Allah will not allow except that His Light should be perfected even though the Kafirun (disbelievers) hate (it).” [TMQ Surah at-Tawbah 9:32].