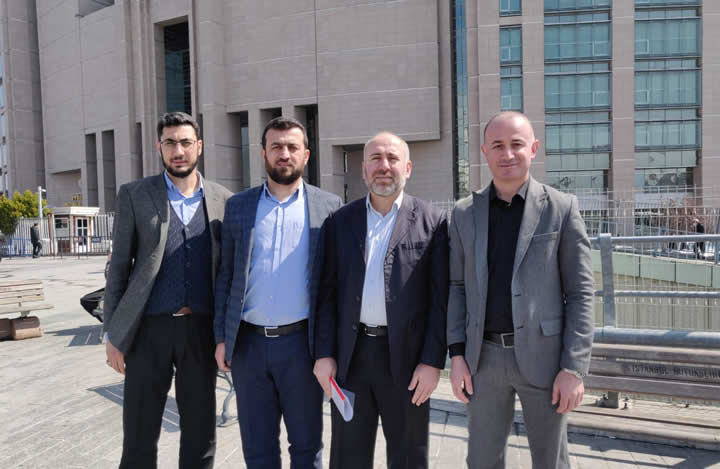 On Friday, 02/04/2021, the law has been slaughtered again with the trial which was initiated because of the Khilafah (Caliphate) Conference in Turkey in 2017 but did not take place due to the administration’s obscuring.

The 30th High Criminal Court of ISTANBUL has sentenced the four speakers with 31 years and 3 months of imprisonment.

The conference entitled with “Why is the World in Need for Khilafah?” was planned to be held by Koklu Degisim Journal was obscured without any binding reason, and judgement process was started regarding the conference speakers.

At the decision hearing held on Friday 02/04/2021 of the trial conducted by the Istanbul 30 Heavy Criminal Court, conference speaker Mahmut KAR was sentenced to 12.5 years, Abdullah Imamoglu, Musa Bayoglu and Osman Yildiz for 6 years and 3 months separately. In addition, a decision was made to ban all persons from going abroad. The decision was made by a judge from the court panel with an opposition comment, that is, a majority of votes.

At the sentencing hearing, Mahmut Kar, theologian writer Abdullah Imamoglu, Musa Bayoglu and Osman Yildiz made defenses that refuted the claims made in the prosecution’s opinion one by one. They clearly expressed that Hizb ut Tahrir rejects force and violence, and they did not state any word encouraging terrorism, they also underlined that one cannot demand a severe punishment due to a conference that has not been held and all these heavy punishments are not inconvenient to the law and the conscience. Again, they declared that the Anti-Terrorism Law in force is clear, that their acts and activities do not involve violence and terrorism cannot be considered as crimes, so the claims of the prosecution lack substance.

The President of the Court Read the Sentence, saying, “This File Is Indisputable!”

After the 30th High Criminal Court panel took the defences and the break and explained the decision: “we talked, assessed that Hizb ut Tahrir was a terrorist organization.” The head of the court, who did not provide a concrete justification that Hizb ut Tahrir is a terrorist organization, announced the decision, saying: “This file is indisputable.”

The Law Has Been Slaughtered Once Again!

That one of the members of the court submitted its opposition and the decision was taken with majority shows clearly the unlawful judgements moreover the controversy and arbitrariness against Hizb ut Tahrir. Yet, in other files of Heavy Criminal Courts of Istanbul, Ankara and Sanliurfa, it is known that the acquitment decisions were given by declaring that Hizb ut Tahrir is not a terrorist organization but a civilian structure.