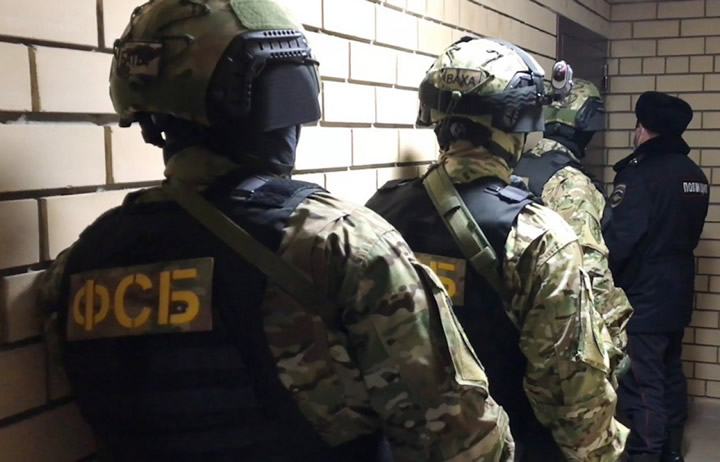 On February 18, the press service of the FSB reported: “The Federal Security Service of the Russian Federation, in cooperation with units of the Federal Service of Troops, the National Guard, the Ministry of Internal Affairs of Russia, as part of a special operation in the Republic of Crimea, the cities of Moscow, St. Petersburg, Primorsky, Krasnodar Territories, the republics of Bashkortostan, Dagestan, as well as in Orlov, Kaluga, Ivanovo regions, detained the members of the international terrorist organization Hizb ut-Tahrir al-Islami (banned in Russia by the decision of the Supreme Court of the Russian Federation in 2003).

As a result of the conducted operational-search activities, it was established that the members of the structure, including through the Internet, disseminated militant Islamist terrorist ideology, combined with intolerance to other religions among the residents of the Russian Federation, and also recruited Russian Muslims into the ranks of this international terrorist organization. In their propaganda activities, they applied the doctrine of the creation and proclamation of the so-called “world caliphate”, established by overthrowing secular governments during military coups and “Islamic revolutions”.”

Comment:
After the statements of the FSB press service about the detention of the Shabab of Hizb ut Tahrir, the Russian media were full of headlines about the large-scale operations of the security agencies and the successful work of the FSB in the country. Most of the media did not even bother to verify the reliability of the information, and even more so none of them verified the fact that Hizb ut Tahrir was involved in terrorist activities.

The Kremlin regime has been and remains since the time when the godless communists came to power in Russia, criminal and exists at the expense of power structures like the police, the FSB, etc. The authorities believe that the people of Russia were and remain their slaves. Everyone who has his own opinion and opposes this criminal power, the Kremlin is ruthlessly cracking down on the physical method. This was the case in the USSR, and this is the way it is today.

Physical elimination, without ideological struggle, is the Kremlin’s only tool, because it has no alternative – an idea that could refute the thoughts of opponents, convince people and rule peacefully and in harmony with its people.

The situation with Hizb ut Tahrir is a good example. The party was simply banned by the Supreme Court, without reason and evidence of terrorist activity. The Kremlin simply does not have an idea that they can offer the people and oppose the ideas of Hizb. Therefore, the Kremlin’s only method is to ban Hizb, ban the study of Hizb literature, and physically eliminate Hizb so that the people cannot study the ideas of the party and make their own decision. Therefore, we see blatant lies spread by the Russian media regarding Hizb.

This is on the one hand. On the other hand, the Kremlin is so mired in its crimes that it uses all its criminal methods to keep power in its hands. Recently, the people of Russia are tired of the tyranny of power, and more and more often take to the streets of cities demanding changes. And in order to distract the people from their demands, the Kremlin frightens the people with an imaginary threat of terrorism, spreading false information about the mass arrests of terrorists and the prevented terrorist acts.

But no matter how hard the tyrants trick, their outcome is the same. The people, tired of tyranny, ultimately rise up to revolution, and then the tyrants remain under the feet of the crowd. We remember and know what happened to the Pharaohs, what happened to Gaddafi, Mubarak and similar tyrants. More recently, one of the leaders in the world arena, the communist regime of the USSR, about which no one could imagine that it would collapse, fell under the onslaught of the anger of the Russian people. Today, the power in the Kremlin, about which they also think that it cannot collapse, is considering its last days.

Hizb ut Tahrir, in turn, carries a call from the will of Allah, despite all the cruelty of tyrants around the world, be it in Russia, Turkey, Palestine, Syria, etc.

This difficult and cruel stage in the life of Muslims will soon be over! With the permission of Allah, Muslims will regain their greatness and leadership in the world arena!

Imam Ahmad quotes a hadith from Numan ibn al-Bashir that the Messenger of Allah (saw) said: