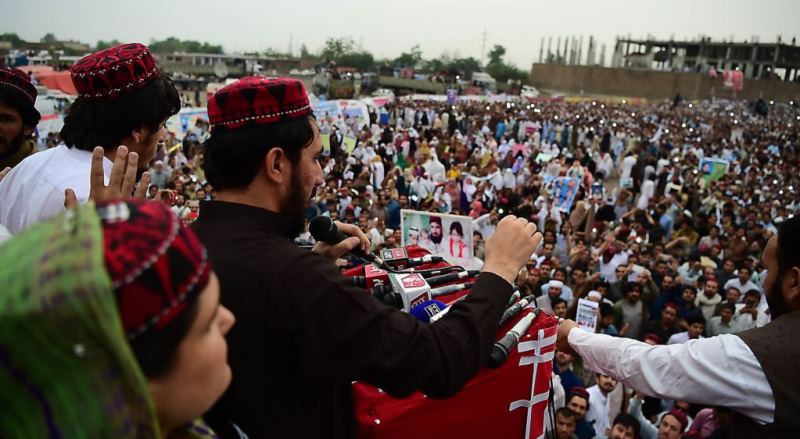 Triggered by the unjust murder of Naqeebullah Mehsud by the corrupt police officer Rao Anwar, the Pashtun tribes have erupted in anger and frustration and rallied behind the Pashtun Tahafuz Movement (PTM). After almost two decades since 9/11, this public outpouring of anger is evidence of the popular rejection of the policies the US agents in Pakistan implemented in pursuit of America’s destructive “War on Terror.” However, some of the slogans emerging from this new platform are regrettable as they raise fingers at the honorable armed forces rather than the traitors in Pakistan’s political and military leadership. So that the anger is directed at the right place and the Muslims move in a productive manner, let the Muslims consider the following points:

1- The noble Pashtun Muslims and the honorable armed forces are one hand against the enemies of Islam and Muslims. The people of Pakistan are indebted to the bravery of the Pashtun Muslims for their heroic role in the liberation of Azad Kashmir. The Pashtun tribes and Pakistan’s armed forces joined hands as once force to defeat the Soviet Union and forced it to retreat from Afghanistan, never to return again. It was this heroic feat which inspired confidence in the Ummah and gave impetus to the Islamic revivalist efforts, which had started gathering strength within the Muslim World.

2- After invading Afghanistan, America realized that the strong bond between the Muslims of the tribal regions and Pakistan’s armed forces is the key obstacle to her continued occupation of Afghanistan. America therefore incited a war of Fitna to weaken the bond of brotherhood between them. Indeed Trump’s current demand that Pakistan’s armed forces sever ties with the brave tribal fighters resisting the American occupation of Afghanistan is part of the same policy.

3- To create discord between the armed forces and Muslims of the tribal region, America incited a war of Fitna by orchestrating a wave of bomb blasts throughout Pakistan through its Raymond Davis network. Pakistan’s rulers did not cut the head of the snake by expelling the US private military and intelligence presence in our country which was behind these bomb blasts. Instead, they put the blame on such attacks upon the tribes as a justification for military operations, which turned Muslims against Muslims.

4- Traitors in Pakistan’s political and military leadership incited Fitnah amongst believers to please their American masters. They collaborated with the US to suppress the Jihad being waged against American occupation of Afghanistan. To protect the American occupation, the traitors adopted every mean available to them to punish anyone who supported the Afghan Jihad using abductions, torture, imprisonment, enforced disappearances and assassination. In blind obedience to Washington, these rulers did not care for our armed forces or any of our people and unleashed destruction and misery throughout the country. Shouldn’t these US agents be the sole target of our anger and frustration? Allah (swt) said, أَلَمْ تَرَ إِلَى الَّذِينَ بَدَّلُوا نِعْمَتَ اللَّهِ كُفْرًا وَأَحَلُّوا قَوْمَهُمْ دَارَ الْبَوَارِ “Have you not seen those who have changed the Blessings of Allah into disbelief and caused their people to dwell in an abode of destruction” [Ibraheem: 28]

5- The only reason for the suffering of the noble Pashtun Muslims was their love for Islam and Jihad, which compelled them to reject the American occupation of Afghanistan. America punished them for this through her agents in Pakistan’s political and military leadership. We advise the Pashtun Muslims to continue to hold to their Deen firmly and demand the removal of the agent rulers who have abandoned the Muslims for the sake of the US crusaders. Let them demand clearly their desire for the implementation of the Law of Allah (swt), which alone will guarantee peace, prosperity and security.

6- It is upon the officers of Pakistan’s armed forces to uproot the US agents who have spilled Muslim blood in rivers to protect the US presence in Afghanistan.  Let them grant the Nussrah now to Hizb ut Tahrir for the re-establishment of the Khilafah (Caliphate) on the Method of the Prophethood. Then, and only then, we will be led by a Khaleefah Rashid who will immediately end alliance with America, close US embassy and bases, release all missing persons and unify the Pakistan’s armed forces tribal fighters as one hand against the US crusaders. Let the Muslims stand as one row behind a Khaleefah Rashid, who obeys Allah (swt) and His Messenger ﷺ alone, extinguishing the fires of Fitnah and forcing the retreat of the Kuffar enemy.

“And hold fast, all of you together, to the Rope of Allah (i.e. this Qur’an), and be not divided among yourselves, and remember Allah’s Favour on you, for you were enemies one to another but He joined your hearts together, so that, by His Grace, you became brethren (in Islamic Faith), and you were on the brink of a pit of Fire, and He saved you from it. Thus Allah makes His Ayat (proofs, evidences, verses, lessons, signs, revelations, etc.,) clear to you, that you may be guided.” [Surah Aali-Imran 3:103]