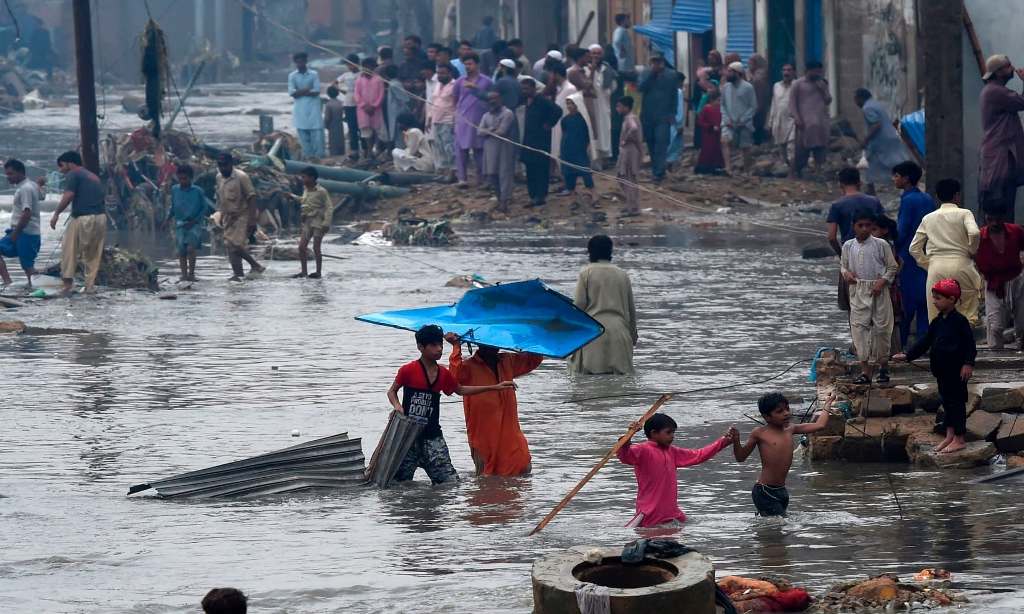 With devastating losses in property and paralyzing disruption in electricity supply, much of Karachi remained submerged in a waist-deep mixture of rainwater and sewerage, several days after heavy rains during the annual monsoon season. Thus, within days, decades of neglect of Pakistan’s economic hub and largest city, home to over twenty million, erupted into a national crisis.

Facing huge public anger for failing to address Karachi’s suffering despite two years in government, Pakistan’s embarrassed political and military leadership hurriedly announced a Karachi Transformation Plan. However, just a day after the grand announcement of the plan, a bitter feud between the provincial and federal tiers of the government broke out over the plan’s funding, on 6 September 2020. The plan is failing already because it failed to address the root cause of Karachi’s prolonged, deeply-rooted divisions, Democracy.

Through federalism, Democracy divides Karachi’s ruling vertically into three tiers, at the levels of the city, province and state, with separate elections for each tier. Division of power into levels of government leads to neglect of the people’s affairs, as federal, provincial and city officials deny responsibility, citing jurisdiction issues. Even now as Karachi tries to recover, the MQM in the city, the PPP in the province and the PTI in the federal government are busy blaming each other.

Through separation of powers, Democracy divides ruling horizontally amongst ministries, such as separate ministries for water, power and food security, and amongst state institutions, into separate executive, legislative and judicial branches. Instead of creating accountable government, this division of power leads to the neglect of the people’s affairs, as ministries and institutions again shift blame and deny responsibility.

Through its diversification of political representation in law-making, Democracy divided the citizenship of the huge, ethnically diverse city of Karachi amongst several political factions, each claiming to represent either Sindhis, Mohajirs, Pathans, Punjabis or Baluch. As a result of Democracy, Karachi’s politics and law-making is a fierce competition between rival political factions, whilst election-time is like an announcement of war, with violence and loss of life.

For seven decades, Democracy has failed Karachi as it is a flawed, man-made system that can never generate unity in society and state. Democracy has failed in all its forms, whether its civilian parliamentary form, its military presidential form or its current hybrid form. Even the global standard bearer of Democracy, the United States, is deeply divided by Democracy, with evident conflicts between different racial groupings, tiers of government and parallel institutions, in the year of presidential elections.

The Khilafah alone will end destructive division through implementing Islam.  In Islam, rulers derive law from the revealed texts, as opposed to Democracy where political factions make laws according to their interests. In Islam, the rulers are held to adhering to Islam as a law. Allah (swt) said, فَإِن تَنَازَعْتُمْ فِي شَيْءٍ فَرُدُّوهُ إِلَى اللَّهِ وَالرَّسُولِ إِن كُنتُمْ تُؤْمِنُونَ بِاللَّهِ وَالْيَوْمِ الْآخِرِ “And if you disagree over anything, refer it to Allah and the Messenger, if you should believe in Allah and the Last Day.” [Surah an-Nisa’a 4:59]. The Court of the Unjust Acts can remove any ruler, including the Khaleefah, for any persistent flagrant violation of Islam. If a ruler resists his removal, it is upon the people of power to remove him by force. Moreover, the political parties in the Council of the Ummah in the centre and the Wilayah Council in the provinces advise the rulers according to Islam. Thus, the armed forces, judiciary, assemblies and rulers are all unified by a single purpose, to worship Allah (swt) alone.

In Islam, the Khaleefah himself is the ruling authority who is directly responsible for the actions of all the rulers in the state, whether the Wali in the province or the Aamil in the city. The Khaleefah alone is the competent authority to directly replace the incompetent Wali or Amil with capable ones, upon the complaint of the people of the province or city. This is because although Allah (swt) reserved law-making sovereignty for His (swt) Law alone, He (swt) granted authority to rule by Islam to the Islamic Ummah. Through Bayah, this authority is transferred from the Ummah to the Khaleefah, by her consent and choice, with the Khaleefah being completely responsible before Allah (swt) in the Aakhira and over the Ummah in the Dunyah.

Regarding citizenship, the Islamic Ummah looks upon itself as a single, indivisible brotherhood, bonded by the Aqeedah of Islam alone. It is not divided on ethnic, linguistic or regional lines and no political party can ever be established on such divisions of ignorance. RasulAllah ﷺ said, «مَنْ قُتِلَ تَحْتَ رَايَةٍ عُمِّيَّةٍ يَدْعُو عَصَبِيَّةً أَوْ يَنْصُرُ عَصَبِيَّةً فَقِتْلَةٌ جَاهِلِيَّةٌ» “One who is killed under the banner of a man who is blind (to his just cause), who raises the slogan of family or supports his own tribe, dies the death of one belonging to the days of Jahiliyyah (Ignorance).” [Muslim].

As for administration, the Khaleefah ensures that it is decentralized to ensure speed of execution, whilst providing the allocation of funds and resources according to the need of each province and city, rather than the size of its population or representation in the assemblies. Thus, the response to any emergency situation is both rapid and effective, as seen in the time of famine in Madinah, under the Khaleefah Rashid, Umar al-Farooq (ra).

Does the divided, troubled city of Karachi not remind us of the city of Yathrib, before it was transformed by Islam into Al-Madinah Al-Munawwarah? The situation of the Islamic Ummah will not be put right at any level, city or Ummah wide, until we return to what was right in the beginning, the ruling by Islam. The Khilafah raised magnificent cities that were the marvels of the world during the thirteen centuries of its existence, including Madinah, Damascus, Baghdad, Cairo and Istanbul and will do so again upon its return inshaAllah. So let us all firm our commitment to Allah (swt) and strive for the re-establishment on the Khilafah (Caliphate) on the Method of Prophethood, fearing none but Him (swt) and depending upon Him (swt) alone for success. Allah (swt) said, إِنَّا لَنَنصُرُ رُسُلَنَا وَالَّذِينَ آمَنُوا فِي الْحَيَاةِ الدُّنْيَا وَيَوْمَ يَقُومُ الأَشْهَادُ “Surely We do help Our Messengers and the believers in the worldly life as we as on the Day on which witnesses will stand (to give their testimony).” [Ghafir: 51]