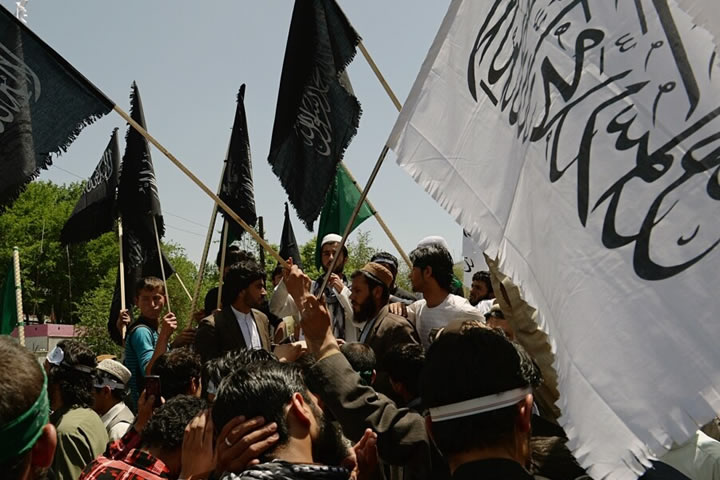 The government of Afghanistan has introduced the ‘Afghan Constitution’ and the ‘Law on Parties’ as the only sources for registration of parties, after being processed by the Ministry of Justice. The fact is that the current laws are not only inconsistent with the current reality, but are full of obvious contradictions with the rules of Islam (Sharia). Moreover, the current laws stipulate that parties are limited to the boundaries of Afghanistan. Conversely, Islam calls the Muslims as a united ‘Ummah’; the believers as brothers to each other and obligates the Muslims to reside in unity under the umbrella of the Khilafah (Caliphate). Therefore, the laws and the Constitution of Afghanistan have made it impossible for Hizb ut Tahrir to get registered as the call for the unity of Muslims and the revival of Islam is not possible within the framework of prevailing colonial borders.

Meanwhile, there are many democratic parties and secular institutions in Afghanistan that have repeatedly violated the same legal terms and conditions – but not a single statement has ever been made against them so far. As examples: the law specifies that parties shall not possess external resources and/or that parties shall not have links with transnational entities, while in Afghanistan there are numerous political parties and civil societies that are in regular contacts with multinational Western organizations – as they not only receive funds and directives from them but also report to them.

The government and people of Afghanistan must realize that not a single activity of Hizb ut Tahrir is in contradiction with Islam. This is, indeed, the problem of Afghanistan’s legislative system which is not based on Sharia Law; as a result of which, the activities of Islamic parties face grave challenges, while the democratic parties and those contrary to the beliefs of Afghan people are welcome to carry out their missions freely under the umbrella of this system. Thus, the solution for the problem is that the Afghan government must try to turn the bases of its democratic laws completely into that of Islamic, and should address the existing realities, including the activities of the parties, based on the Islamic sources (Quran, Sunnah, consensus, and Analogy) by means of Ijtihad. Yet, this seems to be impossible in all democracies and Nation-State systems. On the other hand, Hizb ut Tahrir is ready to register the party to launch its official and open-to-public offices across the country if the Ministry of Justice acknowledges the organizational profile as the only cause for registration as is the case in other countries. This applies to a number of countries where Hizb ut Tahrir has been registered. It is worthy of mentioning that non-registration of parties is not unprecedented in the history of Afghanistan as Jihadist parties had not asked the communist regime for license to fight against the Soviets because their activities were rooted in Islam, and they required neither a license nor registration.

We remind you once again that Hizb ut Tahrir is an Islamic political party that strives globally by struggling together with the Ummah to restore the Khilafah and the rule of Allah (swt). The method of Hizb ut Tahrir activities is entirely intellectual and political, and it rejects any kind of democratic, material and violence-provoking activities through its struggles. Hizb ut Tahrir was established based on the following instruction of Allah (swt):

In conclusion, Hizb ut Tahrir has taken its legitimacy through the instruction of Allah (swt) because the struggle for the restoration of Islam and the re-establishment of the Khilafah is one of the orders of Allah (swt) and an obligation over all Muslims; therefore, struggling and striving for such a great end doesn’t require a political and Islamic party to get authorization from the republican governments and secular laws. Besides, Hizb ut Tahrir is not a ‘mysterious’ party because it has gained more than six decades of experience in actively struggling and calling for Islam throughout 60 countries around the world.