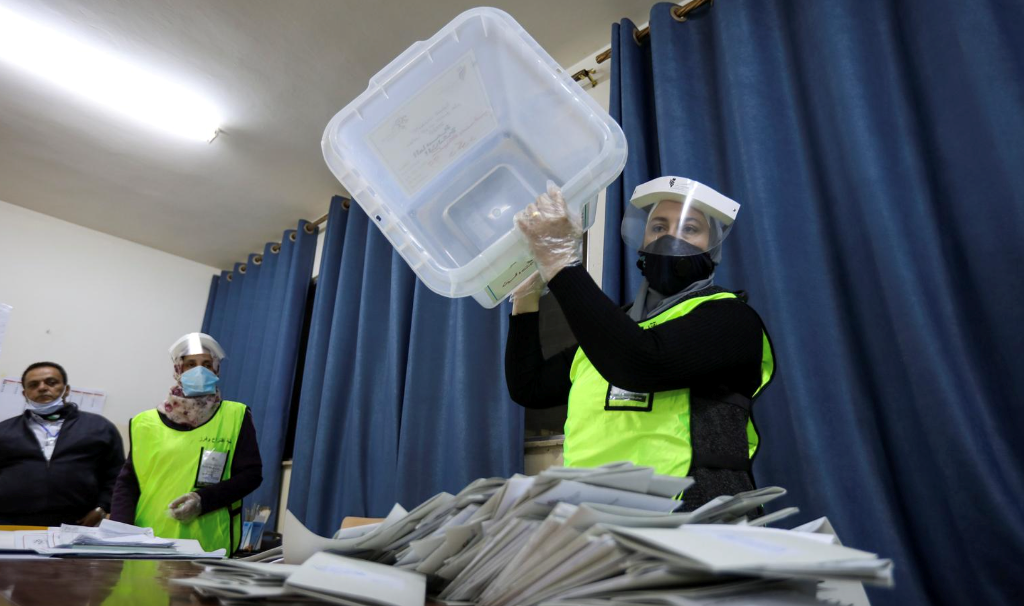 They are not in the Interest of the People

Rather, they are a Service to the Colonial Subordination of the Jordanian Regime

The opinion poll of the Center for Strategic Studies at the University of Jordan dated 6/10/2020 CE under the title “The Pulse of the Jordanian Street-24” stated that half of the Jordanians (50%) confirmed that they would not participate in the upcoming parliamentary elections, while only 17% confirmed their participation in the upcoming parliamentary elections if they are held. Among the most important reasons that Jordanians would not participate in the upcoming elections, in order were: their lack of confidence in the parliament, their lack of confidence in the integrity of the elections, and because of the lack of a competent candidate. The situation of the pandemic was not among the reasons affecting the majority.

Despite the worsening epidemic and health situation, the decision-maker’s discourse that necessitates, while he talks about deaths, epidemic spread, hospitalization, and the preservation of lives and the shrinking of the economy, that such elections should not be held, the government and the Independent Election Commission are moving ahead with steps to hold such elections according to their scheduled time frame, inspired by the directions of the regime’s head that the elections should be held on time. On top of that there is official media talk about the importance of participating in the elections and urging people to do so under the name of constitutional entitlement and the right of people to choose their representatives, despite what was mentioned in the previous opinion poll that contradicts the public opinion of the Jordanian street, and despite the widespread satirical talk on the social media platforms, rejecting the participation in these elections.

Going through these electoral procedures and highlighting their features on the ground, in terms of participation and violations, and the focus of showing them in the official media, is not due to the regime in Jordan’s concern, as it claims, to activate constitutional entitlements as a justification for holding new legislative council elections that are more corrupt and worse than its predecessors. Rather it is because it will be responsible for a new role required by the colonial subordination of the system; either submission to the countries of the kaffir West, or a new treacherous agreement with the Jewish entity; economic or normalization, or part of a new international deal between European (specifically British) and American colonial competitors over the country and the Ummah, its wealth and its creed…

It is an American merit, which the system performs under the eyes of the President of the United States of America whether it is Trump or Biden, and under the hearing of its new ambassador, Henry Wooster, to prove its compliance with their dictates, in case it was forced to postpone or cancel the elections under the pretext of such a critical epidemic situation, to give itself a time limit to get a clear view to what could emerge from the international situation; whether it will be the British or American role regarding the status of the regime in Jordan, or to proceed with the elections that will inevitably result in a weak House of Representatives with weak electoral representation, entrusted with the implementation of American agendas required from the regime, such as endorsing the American vision for a solution for the issue of Palestine and its provisions, which Jordan initiated to implement many of its projects. In addition to drafting a new electoral law that activates the constitutional monarchy, parliamentary government and real population representation, so that this new council will continue until the end of its term or be dissolved after a short period of time under the pretext that it does not truly represent voters, so that a new council can be elected according to a new electoral law.

The ruling regimes in Muslim countries need to be subordinate to the Ummah’s enemies and to submit to their orders and plans, with which they fight Islam and its people and implement them through treacherous and normalizing agreements… They need the existence of such legislative parliaments, which they falsely claim to represent the people in order to entrust the responsibility of these reprehensible acts to the people and blame them for these betrayals, and the best evidence of that is the treacherous Wadi Araba Treaty approved by these councils, where “Islamist” representatives were part of these councils.

Islam approves the holding of elections, and the upcoming Khilafah (Caliphate) State will soon, Allah willing, hold elections to choose representatives of the people in the Ummah Assembly. The elections in the Khilafah (Caliphate) State have representatives or delegates of the people in expressing opinion and holding the ruler accountable on the basis of the rulings of Islam, monitoring him and preventing him from injustice and deviation. These are other than the parliamentary elections in the democratic capitalist system. The elections in it produces representatives who hold the state accountable on the basis of the rules of man-made constitution, and legislate and ratify laws, and for this reason the House of Representatives was a legislative assembly based on other than the rules of Islam. This is because the legislator in Islam is Allah (swt) Alone and because Islam prohibits Muslims to legislate, for His (swt) saying: وَأَنِ احْكُم بَيْنَهُم بِمَا أَنزَلَ اللَّهُ وَلَا تَتَّبِعْ أَهْوَاءَهُمْ وَاحْذَرْهُمْ أَن يَفْتِنُوكَ عَن بَعْضِ مَا أَنزَلَ اللَّهُ إِلَيْكَ “And judge, [O Muhammad], between them by what Allah has revealed and do not follow their inclinations and beware of them, lest they tempt you away from some of what Allah has revealed to you” [Al-Ma’ida: 49].

Therefore, it is not permissible to participate in these elections in any form, neither as a candidate nor as an electorate.

O People … Our People in Jordan;

You have reached a level of awareness that enables you to realize the illegitimacy of the parliament and its lack of loyalty to your aspirations and your revival projects, and that they represent the interests of the ruling system and the consolidation of its subordination and do not represent you. The history of all parliaments since their establishments attest to this. And far from the state’s aspirations of elections, the time has come for all sincere people who intend to run for these elections, to distance themselves from it, and to realize its reality and to represent the people genuinely as they aspire to implement their revival project by establishing the Khilafah State that eliminates the Jewish entity and expels the colonial kuffar from our country. They tamper with all the state’s resources and fight over its wealth. Also, the time has come for the people to stop participating in these parliamentary elections as they consolidate tyrannical rulings. So be part of the majority who have realized the foolishness and illegality of these elections and are determined to change this reality. And work with those working with the method of the Messenger ﷺ of change, by carrying the Islamic call and establishing the Khilafah Rashidah (rightly guided Caliphate) on the method of Prophethood.