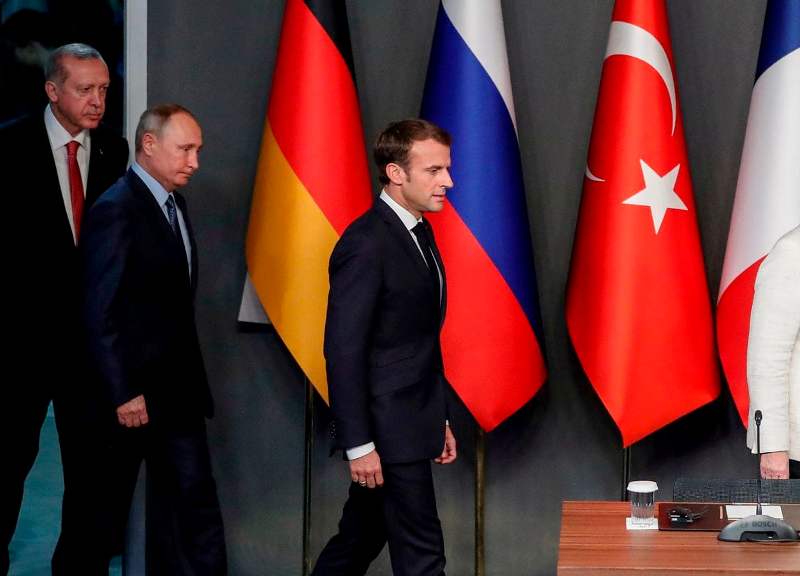 On Saturday 27/10/2018, a quartet summit was held in Istanbul, Turkey, to discuss the Syrian dossier, attended by the Turkish President Recep Tayyip Erdogan, Russian President Vladimir Putin, French President Emmanuel Macaron, and German Chancellor Angela Merkel; and the final communique of the summit stressed the need for a political solution for what they called the Syrian crisis, and a permanent ceasefire in Idlib. The leaders also stressed the importance of achieving a comprehensive cease-fire in Syria; and continue to work together against what they called terrorism. The leaders called for the establishment of a commission in Geneva to draft Syria’s constitution with a view to achieving constitutional reform, and pledged to work together to create conditions conducive to a political solution to peace and stability in Syria.

All the conferences and meetings related to Ash-Sham revolution since its inception to date have proved that they were nothing but narcotization for the people of Ash-Sham; passing of the West’s plans to eliminate this orphan revolution; and returning its people to the American House of Obedience; which has fiercely defended its agent, the tyrant of Ash-Sham; and it continues on the way to recycle it again through these summits and conferences.

The follower of the statements of the presidents clearly sees the huge amount of disinformation and narcotization practiced on the people of Syria, and sees the agreement of all to end this revolution; and that their differences is on the priorities only. All this disinformation and narcotization is carried out under the title of stopping the bloodshed and ending the suffering of the people of Ash-Sham; and that the fate of the tyrant of Ash-Sham will be determined by the Syrian people. And we wonder whether the international community really wants to stop the bloodshed after it has allowed its agent the tyrant of Ash-Sham to commit massacres that claimed the lives of one million Muslims or more? Does the international community really want to end the suffering of the people of Ash-Sham after all this destruction, displacement, murder and violation of honors, while it has been silent for all these years? Did not the Syrian people determine the fate of the tyrant when they staged massive demonstrations against him eight years ago? Is it not the international community that supports the tyrant and prevents him from falling so as to stand against the will of the Syrian people?

The goal of all these conferences is one, however the styles changed, which is to put the fate of the people of Ash-Sham in the hand of their butcher and to return them to the den of submission again; so, let not be deceived by these conferences and sweet statements. Perhaps the most dangerous roles in these conferences and covenants, is the role played by the Turkish regime, which is keen to appear as a sponsor who is keen to protect the rights of the Muslims in the liberated north of Syria; but in fact, it drives the people for slaughter and the areas for handover. Where is Aleppo and where are the areas of reducing escalation? All of them were handed over and with the participation of the associated factions’ leaders, who had pledged their decisions to the supporters for a handful of dollars; they became mercenaries at the Turkish regime; until we reached the point where we are in now.

Ending the suffering of the people of Ash-Sham, and all Muslims, can only be achieved through the establishment of the State of Islam, the Khilafah Rashidah (righteous Caliphate) state, which Rasul Allah ﷺ gave the glad tiding of its return. Because the real reason for the suffering is the exclusion of the law of Allah from the state and society, and the arbitration of the man-made legislations which Allah had not sent down any authority. The Almighty said: وَمَنْ أَعْرَضَ عَنْ ذِكْرِي فَإِنَّ لَهُ مَعِيشَةً ضَنْكًا وَنَحْشُرُهُ يَوْمَ الْقِيَامَةِ أَعْمَى “And whoever turns away from My remembrance – indeed, he will have a depressed life and We will gather him on the Day of Resurrection blind.” [Ta-Ha: 124] And the Almighty says: أَفَحُكْمَ الْجَاهِلِيَّةِ يَبْغُونَ وَمَنْ أَحْسَنُ مِنَ اللَّهِ حُكْمًا لِقَوْمٍ يُوقِنُونَ “Do they then seek after a judgment of (the Days of) Ignorance? But who, for a people whose faith is assured, can give better judgment than Allah?” [Al-Maida: 50].

So, strive to the satisfaction of your Lord, He who in whose hand is dominion, and He is over all things competent; by working with the workers to establish the Khilafah Rashidah (righteous Caliphate) which applies the law of Allah; in the application of His law is the fundamental solution to all your suffering; and in which your glory and your happiness in this World and in the Hereafter.