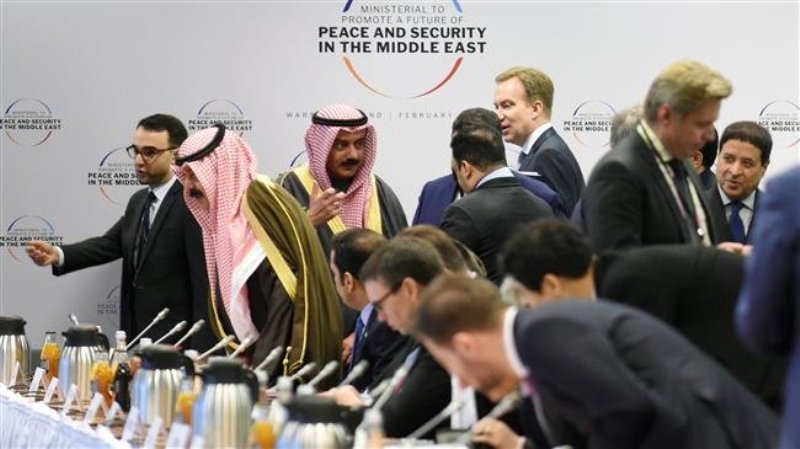 Thus is the way the Arab rulers removed the last piece of cover of their shyness (hayaa’) in conspiring against Islam and Muslims and against the first Qibla of the Muslims and the Prophet’s ﷺ Masra (night journey). Thus is the way the famous “Khartoum No’s” (no peace, no recognition, no negotiation), launched by the Arab rulers at the Khartoum Summit in 1967, evaporated. They reached a point of being witnesses of the “Warsaw wedding”, as per the words of Qatari Foreign Minister and the former Prime Minister Hamad bin Jassem, repeatedly, in his Tweet: “I am not against normalization or against opening a relationship with “Israel”, but the relationship must be equal and not at the expense of the Palestinian rights.”

This “incest” wedding, through which America wanted to turn the page of the Arab rulers’ vanity, who were, until the last summit conference held in the eastern city of Dhahran on April 15, 2018, dissembling with their people alleging their care for “the illegality and illegitimacy of the American recognition of Jerusalem as the capital of ‘Israel’”, as well as their emphasis that Palestine remains the central cause of the Arab nation. It also reached to the point that the Yemeni foreign minister sat next to Netanyahu, the prime minister of the Jewish entity, and gave him the microphone after the rotten criminal’s microphone was not working, so that his voice could be heard at the incest wedding ceremony, which America, the head of Kufr, had arranged.

In his speech to the conference, US Vice President Mike Pence launched a violent attack on Iran, saying that all participants in the conference agreed that the biggest threat in the Middle East is Iran, calling it the first sponsor of “terrorism” in the region. As for the US Secretary of State Pompeo, he called in his speech for what he named a new era of cooperation in confronting the challenges in the Middle East and said no country could remain neutral.

Iran, in turn, has not neglected its hypocrisy and trade of the Palestinian cause; as it holds a speech “ceremony” empty of any content on the last Friday of every Ramadan, and the Iranian Foreign Minister Javad Zarif, stressed in an interview with the French magazine Le Point in December 2018, that his country never said that it will erase the Jewish entity from the map, questioning: “When did we announce that we will destroy “Israel”? Show me one Iranian official who said that. No one has ever said this.”

Between Al-Quds Day of Ramadan on one hand, and the denial of Zarif about Iran’s determination to destroy the Jewish entity on the other hand, the rulers of Tehran did not spare fueling the fire of murder and destruction in Iraq, Syria and Yemen, and fueling the Fitna of the “Sunni-Shiite” fighting, which America today takes as a pretext to justify its call to bless the “incest marriage” between the Arab rulers and Jewish leaders under the guise of addressing the Iranian threat; Bahrain’s foreign minister, Khalid bin Ahmed Al Khalifa, said in a video posted on YouTube by the prime minister of the Jewish entity on his YouTube channel, at a meeting attended by his UAE counterpart Abdullah bin Zayed and Saudi Foreign Minister Adel al-Jubeir, “We grew up talking about the Palestine-Israel dispute as the most important issue. But then at a later stage, we saw a bigger challenge. We saw a more toxic one, in fact the most toxic in our modern history, which came from the Islamic Republic, from Iran.” (Anatolia Agency)

You have become aware of the betrayal of your rulers to you, and their conspiracies against you, and their hypocrisy in courting your enemies, and trading the land blessed by the Lord of the worlds from above the seven heavens, to cover their faults, getting the help of some of those who shall not partake in the blessings of raising the banner of Islam, and their haste to assault all those who call to hold fast unto the rope of Allah and the application of His Law, Imam At-Tirmidhi reported that Hudhaifah (may Allah be pleased with him) reported: The Prophet ﷺ said, «والَّذِي نَفْسِي بِيَدِهِ، لَتَأْمُرُنَّ بالْمَعْرُوفِ، ولَتَنْهَوُنَّ عَنِ المُنْكَرِ، أَوْ لَيُوشِكَنَّ اللَّه أَنْ يَبْعَثَ عَلَيْكُمْ عِقَاباً مِنْهُ، ثُمَّ تَدْعُونَهُ فَلا يُسْتَجابُ لَكُمْ» “By Him in Whose Hand my life is, you either enjoin good and forbid evil, or Allah will certainly soon send His punishment to you. Then you will make supplication and it will not be accepted”. So revolt may Allah have mercy on you, so that you may pardon yourselves, by speaking against those rulers who have betrayed Allah and His Messenger, and have betrayed you, prevent their wrongdoing, as there is no goodness in a life of disobedience (to Allah).

And know that Allah (swt) will fulfill His promise of cleansing the Blessed Land of Palestine from the filth of the Jewish entity, along with their servants of the treacherous rulers and those who are haste in justifying their treacheries of evil scholars and hypocrite politicians… وَقَضَيْنَا إِلَىٰ بَنِي إِسْرَائِيلَ فِي الْكِتَابِ لَتُفْسِدُنَّ فِي الْأَرْضِ مَرَّتَيْنِ وَلَتَعْلُنَّ عُلُوّاً كَبِيراً “And we made [this] known to the children of Israel through revelation: Twice, indeed, will you spread corruption on earth and will indeed become grossly overbearing!” [Al-Isra’:5] … فَإِذَا جَاءَ وَعْدُ الْآخِرَةِ لِيَسُوءُوا وُجُوهَكُمْ وَلِيَدْخُلُوا الْمَسْجِدَ كَمَا دَخَلُوهُ أَوَّلَ مَرَّةٍ وَلِيُتَبِّرُوا مَا عَلَوْا تَتْبِيراً “And so, when the prediction of the second [period of your iniquity] came true, [We raised new enemies against you, and allowed them] to disgrace you utterly, and to enter the Temple (Masjid) as [their forerunners] had entered it once before, and to destroy with utter destruction all that they had conquered.” [Al-Isra’:7]

So work with Hizb ut Tahrir to establish the second Khilafah Rashida State on the method of the Prophethood; which will let the Jewish entity forget the whispers of Satan, as well as the leaders of the West, who empower them with their aggression. And may it be soon.