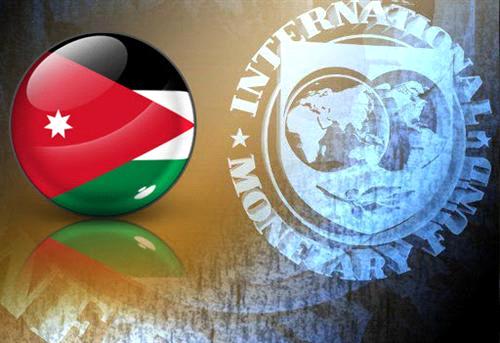 A Mandate with a New Look

The International Monetary Fund (IMF) is currently holding its second review session with the Jordanian government and unofficial figures, to market its corrective program for the Jordanian economy. From our review of what the IMF has published in its website under the title: “Jordan and the IMF Frequently Asked Questions”, we want to point out the following:

First: the reader is left with question of the IMF’s meeting; there are questions and their answers, which show that the IMF has set itself up as the de facto ruler of Jordan. This is evident from the nature of the questions, for example,

What is the IMF’s view on the financial Aid pledged by some Gulf countries worth US$2.5 billion?

What is the IMF’s reaction to the recent events in Jordan?

What measures has the IMF put in place to address corruption, increase transparency and better governance in Jordan?

How can a self-respecting State allow such an insult and blatant interference in its political, economic, social and security issues? And since when does it accept such insolence through the style of speech and dealings? If the rulers of Jordan accept this poor level of dealings and arrogance of the International Monetary Fund, then the people of Jordan, who are proud of their Deen and dignity do not accept the injustice, and they reflect the words of the poet: ‘All difficulty is tolerated but not humiliation … The life of the righteous under oppression is like murder.’

Second: The one who reads the IMF’s questions and answers will realise that it is determined to approve the income tax that it wants to impose on the people of Jordan by force, and that it came to guide its tools for how to implement it and persuade people to accept it. This is why it asked to meet with unofficial figures to convince them of the proposed solutions and economic programs, after the failure of its tools to persuade the people. And this is a dangerous signal to a country claiming sovereignty over its territory; to allow IMF experts to meet with unofficial figures. So what sovereignty allows a colonial tool driven by America as it wishes, to roam and meet whom it wills and impose the laws it likes? As for your (regime in Jordan) sovereignty, we see that it is only over the children and women of Daraa whom you prevented from entering Jordan, and you left them to be easy prey for the militias of Bashar and Iran, or on the sincere Dawah carriers that you raid their homes and terrify their children, and you arrest them on charges made up and issued by the security services as they wish!!

The experts of the International Monetary Fund are a thousand times more dangerous than the alleged terrorism that you scaremonger the people with, day and night. The IMF’s experts are the one who deprived the Jordanians of their public ownership and sold it to their investors in the name of privatization. They are the ones who control and steal the pockets of the poor. They are the ones who targeted with their ferocious attack the curriculums of our sons to corrupt them, and they brought us a debt ratio of 94% of GDP, with the help of the corrupt whom they planted in the state institutions to pollute and ruin it to become an easy prey in their hands.

Thirdly: We address the unofficial figures that the IMF experts intend to meet. We say to you that you should mark a position that pleases Allah and His Messenger by refusing to sit with the experts of the International Monetary Fund. Do not listen to what they scare you with of poverty that will strike the country if you do not do what they ask you, for Allah (swt) says: الشَّيْطَانُ يَعِدُكُمُ الْفَقْرَ وَيَأْمُرُكُم بِالْفَحْشَاءِ وَاللَّهُ يَعِدُكُم مَّغْفِرَةً مِّنْهُ وَفَضْلًا وَاللَّهُ وَاسِعٌ عَلِيمٌ “Satan threatens you with poverty and orders you to immorality, while Allah promises you forgiveness from Him and bounty. And Allah is all-Encompassing and Knowing” [Al-Baqara: 268].

Do not listen to their false promises, because Allah (swt) warned you of people like them, He (swt) says: يَعِدُهُمْ وَيُمَنِّيهِمْ وَمَا يَعِدُهُمُ الشَّيْطَانُ إِلَّا غُرُورًا “Satan promises them and arouses desire in them. But Satan does not promise them except delusion” [An-Nisa’: 120]

And mark for yourselves and your Ummah a position of honour through which the colonialists recognize that this Ummah lives by its men and their honest positions.

“O you who have believed, respond to Allah and to the Messenger when he calls you to that which gives you life. And know that Allah intervenes between a man and his heart and that to Him you will be gathered * And fear a trial which will not strike those who have wronged among you exclusively, and know that Allah is severe in penalty” [Al-Anfal: 24-25]