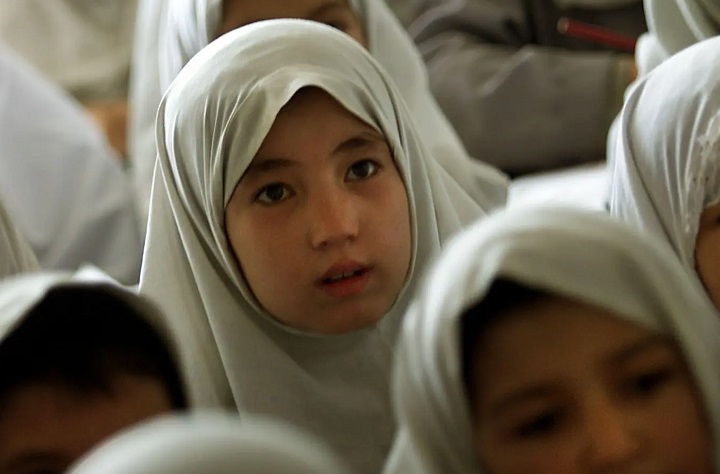 The question is how credible is it that OCHA and the UN and numerous other organizations and states are really concerned about Afghan women and girls? Didn’t they already invade Afghanistan about 20 years ago to help the women and girls? The reality shows that, they offered nothing to the women and girls of this Ummah in recent years except of the corrupt democratic system that sabotaged Afghan women at the political level, followed by the poor economic situation and famine, as well as poor educational opportunities, lack of medical care and the unbearable unstable security situation in the country. The foreign politician Jürgen Trittin described their own situation in Afghanistan so well when he said: “We are dealing with a collective failure”.

1. The Muslim women and girls in Afghanistan and around the world, will never secure their dignity, security and honor from these profit orientated organizations or cruel states. Muslim women need a real state which honors and protects them as they should be. In Article 108 of the Draft Constitution of the Khilafah State from Hizb ut Tahrir, it is mentioned, that the woman is an honor that must be protected. Which law of today’s states gives the women this priority and describes her as an honor which must be protected? The WHO reported that, almost one in three women, about 852 million worldwide, are exposed to violence during their lifetime. So, this is the result of the efforts of these states and organizations. So, how can they help Muslim women?

2. Muslim women need a state which ensures the same rights for all its citizens, male or female, takes care of their affairs and does not discriminate or consider them inferior. In Article 6 of the Draft Constitution for the Khilafah State, it is written that all citizens of the state shall be treated equally regardless of religion, race, color or any other matter. The state is forbidden to discriminate among its citizens in all matters, be it ruling or judicial, or in caring for their affairs. The feminists are crying out for decades against discrimination of the rights of citizenship of women, and this matter never will find an end under the corrupt democratic law. So, the UN better focus on the crying feminists, rather than looking for a solution for Afghan women to give them their fundamental rights back. Only with the glorious law of Islam, the deprivation of Muslim women of their God-given rights, will finally find an end.

3. Millions of Muslim women around the world are living on the streets, or forced to beg or sell their bodies to earn some food for their children. They need a state that offers them financial security, and that can save them from all this disaster. In Article 152 of the Draft Constitution for the Khilafah State, it is mentioned, that the Khilafah is to guarantee the living expenses of the one who has no money, no work and no relatives responsible for his financial maintenance. The state is responsible for housing and maintaining the disabled and handicapped people. According to UN estimates, 70% of the poor people around the world are women. How can it be possible that organizations such as the UN which are unable to find a solution for impoverished women worldwide can help the Muslim women of Afghanistan and elsewhere from their desperate economic plight?

4. Muslim women also need good quality medical care. They are suffering and dying because of preventable or treatable illnesses and lack of medicine, but no state is there which can solve their health care problems. The world and aid organizations notice this problem but can’t solve it. They often just send them expired and outdated medicines to show their compassion. But women in the Muslim lands need a state which provides them free, professional and high quality health care; a state which is genuinely concerned about the health situation of the mothers and daughters of the Ummah. Article 160 of the Draft Constitution of the Khilafah State mentions that the state provides free health care for all. This will be the duty of the Khilafah State and not an option or favour for its women.

5. Will the UN and other organisations be able to provide all the women and girls of Afghanistan and elsewhere a good education? The statistics show us otherwise and that they have for years failed dismally in this area. Only the Khilafah can truly secure this right to the women of the Muslim lands because in the Khilafah, education is one of the basic rights the state is obliged to provide for each and every one of its citizens – male and female. Article 173 of the Draft Constitution of the Khilafah states that it is an obligation upon the state to teach every individual, male or female, those things which are necessary for the mainstream of life. This should be obligatory and provided freely in the primary and secondary levels of education. The State should, to the best of its ability, provide the opportunity for everyone to continue higher education free of charge.

6. In summary, it is clear that the UN, WHO and other humanitarian organizations must drop their masks and their pretense that they want to genuinely help the women and girls of Afghanistan and other Muslim lands by providing food, healthcare, education, livelihood opportunities and protection because they are not in a position to do that and the whole world has been a witness of their failure in Afghanistan, the Muslim lands and the world in securing a dignified and secure life for women.