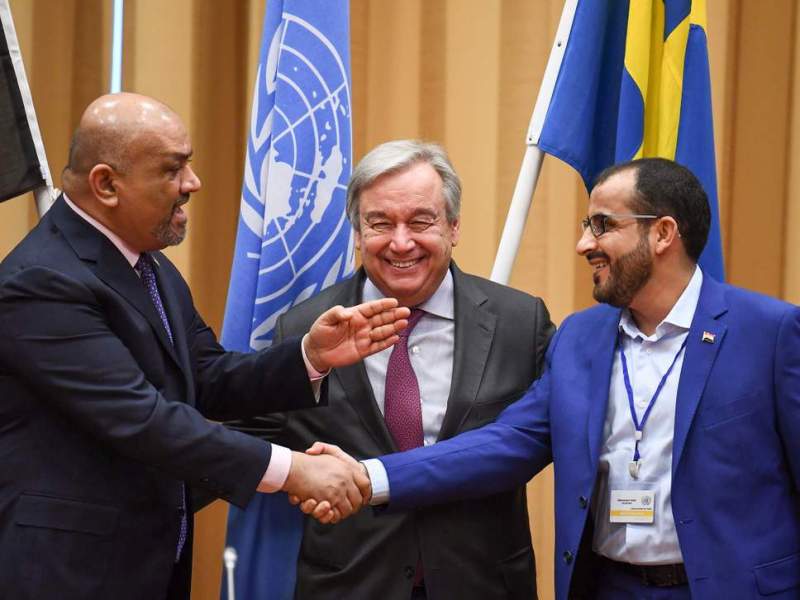 They call it shamelessly to manage Yemen’s Fuel Wealth!!

The Houthis called on the United Nations to arrange for the sale of Yemeni crude oil and to use its revenues to finance fuel imports and to pay the public sector’s salaries through the central bank. This came in a tweet by Mohammad Ali al-Houthi, head of the Houthi Supreme Revolutionary Committee. He said: “We call on the U.N. and the Security Council to put in place a mechanism to sell Yemeni crude oil, including the oil in the (floating storage tank). He said that (selling the crude oil through the UN will provide and import oil, diesel and domestic gas as necessary materials for citizens and to return what is sold to the central banks of Sana’a and Aden to be disbursed as employee salaries to all workers in its area of control).

It is no surprise that this is the position of the Houthis regarding the United Nations, which supports and rescues them continuously, whether through political positions or through economic aid gathered in the name of the people of Yemen in donor conferences. The Houthis then control most of the aid and use it to their interests. The role of the United Nations in Yemen is a malicious colonial role that works to prolong the war in order to empower the Houthis and save them for the benefit of America, the world’s largest controlling state, which seeks to involve them in the rule of Yemen and make them under the Saudi umbrella instead of the Iranian one. The current policy of the White House under the President Donald Trump regarding Iran is to reduce its role in the region and give an important role to new agents that show more subordination to it, especially the king of Saudi Arabia, Salman and his son, the crown Prince Mohammad, whom are seen by US President Donald Trump as two obedient agents with great funds that  must be made in the interests of  America that is protecting its fraying throne.

These statements by Muhammad Ali al-Houthi signify a great deal that they are working with the United Nations and seeking to empower it in the country, which in turn is seeking to empower them in Yemen while working to prolong the war and gain and trade with the hungry people, when it is the one that cries out day and night that Yemen is on the brink of catastrophic famine. This is in order to attract support and grants under the banner of its suffering, while stealing the aid it collects in donor conferences and gives it to its UN and other malicious local organizations that achieve American agendas in Yemen. Most of these funds go to recruit employees for these organizations, and corrupt them intellectually and morally through dollars and high attractive salaries taking advantage of the deteriorating economic situation in the country.

Allah (swt) says: يَا أَيُّهَا الَّذِينَ آمَنُوا لَا تَتَّخِذُوا الْكَافِرِينَ أَوْلِيَاءَ مِن دُونِ الْمُؤْمِنِينَ أَتُرِيدُونَ أَن تَجْعَلُوا لِلَّهِ عَلَيْكُمْ سُلْطَاناً مُّبِيناً “O you who have believed, do not take the disbelievers as allies instead of the believers. Do you wish to give Allah against yourselves a clear case?” [An-Nisa’: 144]

O people of Yemen, you are fooled to undergo this forbidden battle between Muslims … The parties of the conflict from all sides, the agents, brought you to destruction when they made the country the scene of the Anglo-American conflict that has nestled in Yemen through its local and regional tools. It destroyed the country and the people with its dirty wars, then enters the UN claiming to want peace, to play its malignant role, and becomes the arbitrator for those conflicting parties without shame, and everyone considers himself to be right and those killed in his ranks are martyrs! Although none of these conflicting parties have presented Islam as a way of life and a project for revival, nor has it referred to it in its conflicts, nor has it implemented Allah’s law in life’s affairs in its areas of control; while we see initiative after initiative for a secular civil state to satisfy their Western masters spiteful of Islam and Muslims!

O people of Yemen, O people of belief and wisdom …The way for your salvation is in adhering to the rule of Islam and the establishment of its state and to resolve your disputes according to it. With it alone, you will be dignified and enjoy a prosper life, and under it you will stop the hands of the kaffir colonialists from meddling in your country and return as loving brothers, away from sectarianism, so work to establish the Khilafah Rashidah (Righteous Caliphate) on the method of Prophethood, which embodies this in reality, we invite you to respond to that which gives you life.