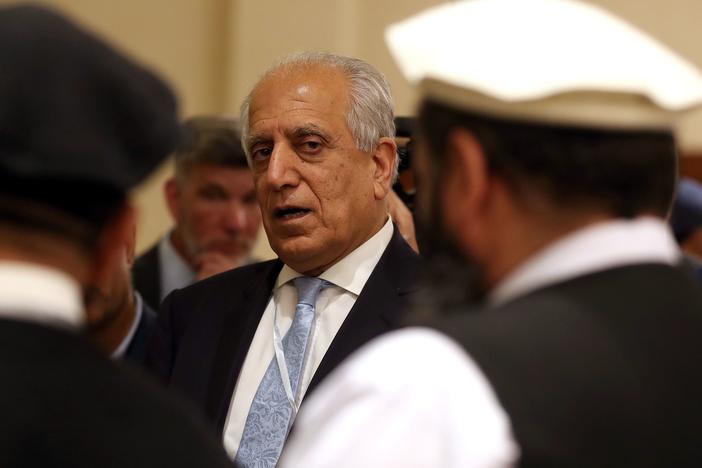 During his recent trip, the US Special Representative for Afghanistan Reconciliation, Zalmay Khalilzad has handed a draft of the interim government plan in Afghanistan with the Afghan government and a number of Afghan political leaders. This ten-page draft plan envisions several possible scenarios concerning the formation of ‘interim government of peace’. Based on the plan, the new political structure will have three independent and equal branches of government (Executive, Legislative and Judicial) including a Supreme Court and local courts. A ‘Supreme Council of Islamic Jurisprudence’ and a ‘Constitutional Amendment Commission’ will also be established based on this plan.

We have repeatedly warned that the US’ perspective on its commitment to agreements is entirely different than that of the Muslims because the US both comes to strike an agreement and then turns to violate it based on its interests. Alternatively, discussions on the new interim government for peace plan with the Afghan government and politicians remarkably indicate the obvious violation of the Doha Agreement, even if the Americans had publicly called for a revision, not withdrawal from the agreement.

Yet, it seems that almost all political factions, including the government of Afghanistan, have shown their agreement on the new plan in some or other way which indicates that they once again acknowledged the deceitful diplomacy of the old double-faced ‘Khalilzad’. However, the US supported its baseless democratic government with the cooperation of the Jihadist groups of Northern Alliance (NA) twenty years ago where the US manipulated the NA’s forces as its infantry to eventually establish the most insidiously old-fashioned democratic government under the name of ‘Islamic Republic’ in Afghanistan. In the aftermath of this scenario, the US plotted to gradually oust the Jihadists one after another, blackmailed most of their popular figures and even physically removed some of them from the scene as this successful mission of the US has been clearly explained in the ‘Envoy’, a book written by Khalilzad.

This time, the new US administration has re-assigned Khalilzad to pursue the same policy against the Taliban and Hizb-e-Islami leaders which seems quite similar to the practice of Bonn with some modifications in details. As this Bonn would ensure share of power for Jihadi leaders of Hizb-e-Islami and Taliban which would gradually result in ousting their power one by one, blackmailing and even removing their powerful figures from the scene – all of which would be published later on his so-called new book, reflecting the successful mission of the US.

Apparently, at the beginning of new trends, the benefited sides seem to be feeling thrilled and victorious, but over time, they figure out that their roots would come out of the ground, being exposed to deadly wind. I personally felt such laughter and sense of triumph among the forces of the Northern Alliance in 2001 as they used to raise roar of success against the international ‘terrorism’. I also felt the same reaction when the leader of Hizb-e-Islami returned to Afghanistan whose supporters used to assume that with the arrival of Mr. Hekmatyar, the country will surely prosper. Likewise, I saw the same applauds of victory a year ago when the Taliban signed the Doha Agreement with the US. But in the soonest time, we figured out that relations between Hizb-e-Islami and Ashraf Ghani’s government soured to a point as they have turned to mock each other in all their statements, which eventually caused the leader of Hizb-e-Islami to lead a protest against the government. Besides, the Doha peace process has reached to a point as it is often translated as failure by different factions.

So, we emphasize once again that the US does not intend to leave Afghanistan at all, but wants its troops to apparently get out of the doors because it wants to actively preserve its intelligence and spies in the country while ensuring that its puppet politicians secure sufficient shares in the government so that it would be able to turn the nature of its ‘occupation’ into a new form of ‘colonialism’, and as a result of which, the Jihadi leaders would not be able to establish any form of pure Islamic state without the will of the US stooges. As one could also see that the initiative of the current process is still in the filthy hands of the US; therefore, the issue of no country, including Afghanistan, will not be resolved unless their initiative and fate fall into the hands of the Muslims.

The main reason behind the defeat of Muslims is their practice of non-Islamic, temporary and pragmatic policies which have been completely rejected by Islam, because Islam solves the entire issues based on strategic, permanent, and ideological policies of Sharia by interpreting the reality as a theme to address Islam, not a standard for their practices.

You must realize that you are bitten by the same scorpion several times from the same hole, while such a condition is unacceptable for believers as the prophet (saw) has said: «لَا يُلْدَغُ الْمُؤْمِنُ مِنْ جُحْرٍ وَاحِدٍ مَرَّتَيْنِ» “The believer is not bitten twice from the same hole.”

Let’s reconsider and renew your commitment with Allah (swt) and pledge that both the ‘occupation’ and ‘colonialism’ of any kind must withdraw from the Islamic land – not in a way as the occupation should end and the colonialism would prevail. It has been a hundred years that Muslims live without Khilafah (Caliphate), as a result of which, the occupation and colonization audaciously kept continuing their presence in Islamic lands, including Afghanistan. The US has suffered a massive failure in the war in Afghanistan, so do not conceal the US’ defeat from the eyes of the world through peace talks and/or an interim government of peace, but turn its defeat into reality by keep continuing Jihad against the current occupation and get united based on Islam to fight against this cunning enemy and struggle for the establishment of the Khilafah.

“O you who believe! If you help Allah, He will help you (and make you victorious over your enemies) and make your foothold firm.” [TMQ 47:7]