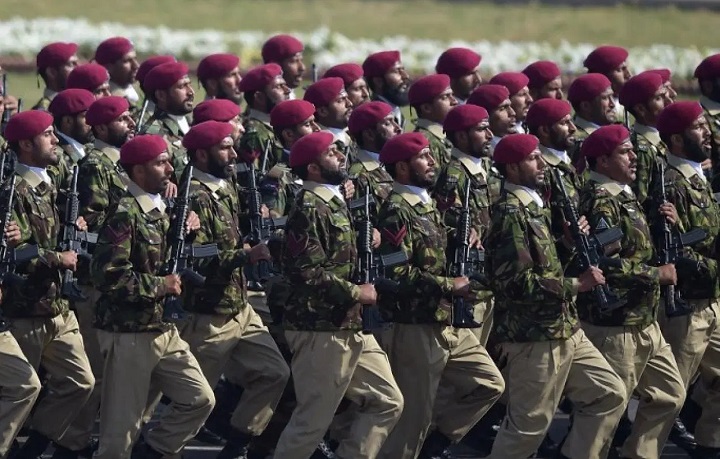 On 28 June 2021, Bloomberg reported that India has redirected at least 50,000 additional troops to its front with China, boosting troop presence there to 200,000, up by more than 40% from last year, in a historic shift in offensive military posture. So how did Modi do what was once thought unimaginable, since India occupied Kashmir in 1947, inflaming a front against Pakistan? After the humiliating withdrawal of the US from Afghanistan, US President Joe Biden is now containing China by redeploying regional assets, including those of its favored ally, India, as a continuation of the “Pivot to East Asia” policy which he instituted as Vice President to Obama. However, Modi cannot serve Biden effectively, unless assured by Pakistan’s rulers that they will not mobilize forces during a clash with China, because the divided and demoralized Indian army cannot fight effectively on a single front, let alone two active fronts. Thus, in blind subservience to their American masters, Pakistan’s military and political leadership march towards normalization with the Hindu State, firmly refusing to fight India over Occupied Kashmir.

Despite the annexation of Occupied Kashmir by Modi on 5 August 2019, Pakistan’s rulers did not react to the flagrant crossing of a red line. Instead of immediate, massive military mobilization, Imran Khan declared on 18 September 2019, “If anyone from Pakistan goes to India to fight jihad… he will be the enemy of Kashmiris,” which was highly appreciated by his American masters. Even when the Hindu State and China clashed over the Gulwan Valley area of Ladakh for several months, the military leadership restrained our willing and capable forces, rather than seizing a golden opportunity to liberate Occupied Kashmir. Moreover, the military leadership maintained consenting silence upon the dangerous declaration of Imran Khan on 20 June 2021 that, “The moment there is a settlement on Kashmir, the two neighbors would live as civilized people. We will not need to have nuclear deterrents.”

Pakistan’s political and military leadership is asking you to accept the surrender of Occupied Kashmir to Modi on the grounds that Pakistan will emerge stronger, after the United States creates a trade corridor for “regional connectivity.” However, we are being lied to now as we were lied to twenty years ago, when the pro-US military leadership then claimed that allying with the US in its War on Terror will strengthen Pakistan, but it in fact led to the loss of tens of thousands of lives and tens of billions of dollars. Pakistan’s current military leadership is lying to us now because both the United States and the Hindu State are confirmed enemies of Islam, Muslims and Pakistan and neither will ever take a single step to strengthen Pakistan. The betrayal of Pakistan’s political and military leadership is obvious to all but those who blind themselves, whilst our continual inaction only allows irreparable damage to Pakistan. Thus, the sincere officers in the armed forces of Pakistan must grant their Nussrah immediately for the re-establishment of the Khilafah (Caliphate) on the Method of Prophethood. It is the Khilafah alone that will thwart the US plan to establish Indian regional dominance to police both China and the resurgence of Islam, by mobilizing the lions of the armed forces of Pakistan for the decisive liberation of Occupied Kashmir from the fragile grasp of Modi, as the first of many steps to assert the dominance of the great Deen of Islam.