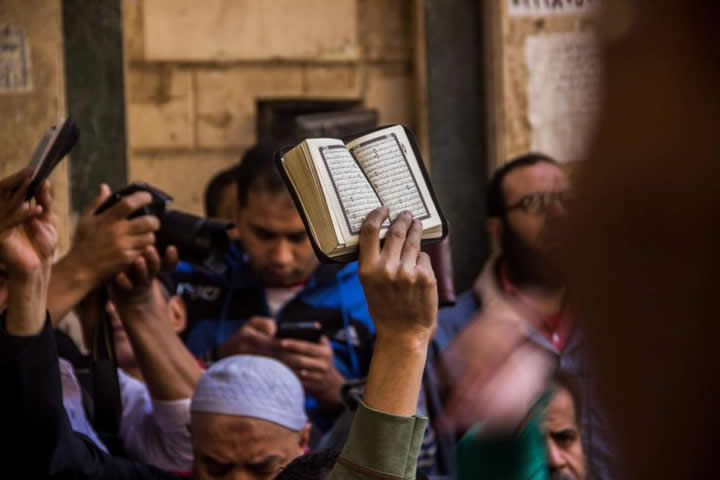 Certainly, the saying of the Messenger of Allah (saw) is true that,

“One day’s life under a just Imam (Khaleefah) is better than sixty years of worship.” (Bayhaqi, Tabarani).

Indeed, it was the Khilafah (Caliphate) that raised the banner of لا إله إلا الله محمد رسول الله“La ilaha illal Allah Muhammad ur Rasool Allah”throughout the world for more than a thousand years, which turned Muslims into world leaders, overwhelmed the major powers of the time, the Romans and the Persians, whilst every Khaleefah, from Abu Bakr as-Sidiqque (ra) to Abdul Hamid II, protected the honor of the Prophet (saw). Spread over three continents, the Khilafah was the most prosperous state in the world, with poverty eliminated, which even witnessed an era where there was none left in need of Zakah.It was the Islamic State that protected its daughters by the use of military force, be it a Muslimah facing harassment from Banu Qainuqa’a, or a call of distress from a sister in Amorium under the Roman Empire or the cries of Fatima from the Indian Subcontinent facing Raja Dahir. It was the Khilafah that prevented blasphemy from the major powers of its time, even in the weakest period of its history.The Khilafah was the protector of the First Qiblah of the Muslims, al-Quds, the Al-Ka’bah Ash-Sharif and the Arabian Peninsula. It was the Khilafah that was the center of knowledge and art, literature, science and technology and high values all over the world.This was the state to which China and the United States paid dues and the one who addressed the clouds, said, “Take rain wherever you want, but it will be in the lands of Islam.”O Muslims!This was your Khilafah which you lost a hundred Hijri years ago this Rajab.

Democracy and dictatorship in the Muslim world are the terrible colonialist revenge against the Muslims for not establishing a Khilafah.The collapse of the Khilafah was the beginning of the transformation of the Muslims from a major power into a slave nation, sinking into the quagmire of humiliation. The Muslims were eventually trapped in the international order built on nation states, whilst before that Europe trembled constantly for fear of a new attack by the troops of the Ottoman Khilafah.The Khaleefah of the Muslims traveled to Dar al Harb by leading his forces to open them. Western ambassadors waited to meet the Khaleefah and the Khilafah’s endorsement for safe passage was considered the beginning of a prosperous era. Moreover, the Khilafah today, stretching from Indonesia to Morocco, could potentially provide tens of millions of troops at the behest of a Khaleefah.

With the collapse of the Khilafah, Muslims lost the shade of Allah (swt) on the earth who protected their belief, life, property, honor and lands for more than a thousand years.It was the Khilafah whose Khulafa’a worked tirelessly to fulfill the Prophet’s glad tidings. The Khulafa’a, despite any personal shortcomings, were the guardians of this Deen and this Ummah.However, today there is no guardian ruler of Islam.Today, there are only cheap agents of colonialism who gain and maintain their power by sacrificing the key interests and resources of the Muslim Ummah to the West. So, O Muslims!After this chaos of a century and failed attempts to find honor in every system other than Islam, isn’t it time for us to know that without the re-establishment of the Khilafah we will continue in slavery! Enough is enough, re-establish the Khilafah, having witnessed the completion of a Hijri centenary since its destruction. Umar (ra) said, “إِنَّا كُنَّا أَذَلَّ قَوْمٍ فَأَعَزَّنَا اللَّهُ بِالْإِسْلَامِ فَمَهْمَا نَطْلُبُ الْعِزَّةَ بِغَيْرِ مَا أَعَزَّنَا اللَّهُ بِهِ أَذَلَّنَا اللَّهُ

“We were a people whom Allah Almighty honored through Islam. If we seek honor through anyone other than Islam, then Allah Almighty will humiliate us.”
(Al-Mustadrak of Al-Hakim).