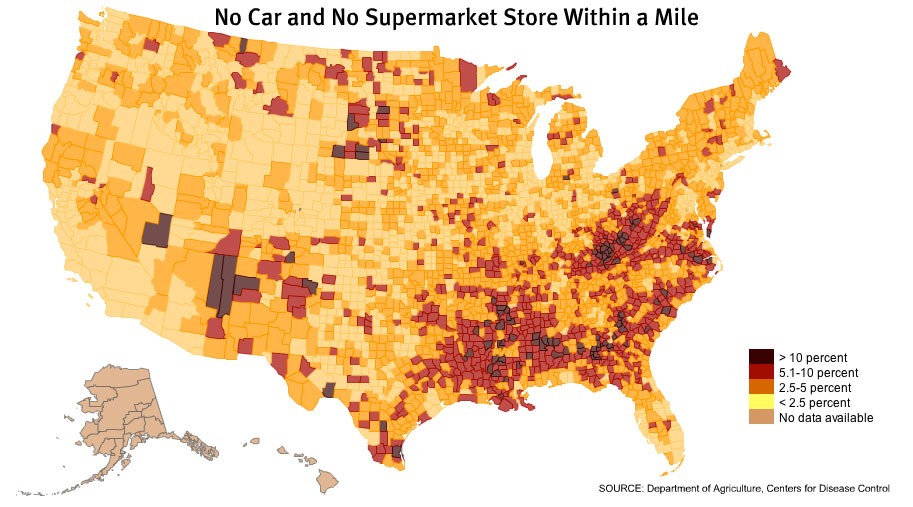 Most people have a clear idea of what a desert is – a vast barren of land with little water and life. However, modern cities have their own man-made version of a humanitarian crisis in the form of Food Deserts. These are areas with a high number of socially deprived citizens living in poverty or below the poverty line who have very limited access to fresh wholesome food. Instead of eating healthily, people in Food Deserts rely heavily “on local quickie marts that provide a wealth of processed, sugar, and fat laden foods that are known contributors to our nation’s obesity epidemic” (American Nutrition Association).

This phenomenon may be very surprising to the rest of the world, especially to those living in the developing nations that consider countries, like the USA, to be advanced and wealthy. The map above shows just how widespread food deserts are and how many millions of US citizens are affected by this; most alarming is the number of children who have permanent life time challenges from being raised in such an oppressive political climate. The web site “How Stuff Works” has listed some important facts to consider about the impact of this subject;

From these facts we can see that there is a great inequality between the rich and the poor that is designed by a political system that does not care for the well-being of its people. The same nation that boasts to be a world leader of freedom and higher values is also a world leader in food waste ranked as number two after Australia. Australians threw away around 361 kg (795 lb) of food per person in 2017. The United States came in second at 287 kg (632 lb) of food waste per person, and Sweden came in third at about 200 kg (440 lb). All of these nations are considered to be role models of economic success and progressive values, but they all have unacceptably large numbers of its citizens suffering low standards of living with a wealthy elite getting wealthier. This is by no means a “natural disaster” like famine in Africa. This is a deliberate and willful situation designed by a Capitalistic system that prefers to keep profits high by throwing away billons of tons of food annually. There is also a clear social segregation that keeps people in a strict class system according to racial bias and social status. Higher levels of food deprivation exist in immigrant and other ethnic groups.

The other aspect that seems contradictory is the link between the very poor in developed Democracies and being overweight. In non-developed nations, poverty is synonymous with starvation and being severely underweight. This is due to the glut in high volume and low quality foods that is described in the fast food culture of the poor. This cheap and nutritionally low diet affects the long-term quality of life, especially in children. Scientific studies have shown the link between a good diet and a higher success rate in schools. Another Democratic nation leading in the Food Insecurity culture is the UK. Teachers have been known to use their own wages to cover meals for children that are clearly starving. Some schools even have meal clubs to assist children at risk from malnutrition. The high-profile movies, entertainment industry and glamorous public relations campaigns by Western governments do not show the true disaster of the corrupt and unfair system that causes misery to so many millions.

Unfortunately, the Muslim Leaders have adopted this same failed system and forced it upon the Muslim Ummah as they serve the needs of their colonial masters. The Economist Magazine ran a story on Ramadan and food waste and it explained how Muslim nations actually increase in their already shameful performance in this area. Saudi Arabia wastes 427kg of food per person, which is triple the European average. Half of the fruits and vegetable in Egypt are never eaten due to poor transportation methods that allow the heat to destroy goods before they reach the market. This is completely criminal and unnecessary when you consider the millions starving Egyptians that could benefit from this appalling failure to distribute food properly. In the UAE, food accounts for 55 percent of waste during Ramadan and in Bahrain food waste increases up to 50%. Mismanaged Iftaar buffets and poor guest manners are the main reason for this.

If the world is to be a safer and a more just place for our future children to grow up in, there must be a radical and complete review of how the world is organised with mass starvation, malnutrition and Food Deserts on the one hand with simultaneous mass food waste on the other. The Muslim leaders must be held accountable for not adopting the correct Islamic Khilafah system that allows for a comprehensive implementation of all of the laws of Allah (swt) in unison with the interests of all human needs. The Khilafah’s Economic System does not accept to manipulate world markets by inflating prices and controlling supply and demand chains of food which makes poor people unable to afford basic rations for their families. The monopoly and privatization of natural resources, such as water, is forbidden in Islam. The fact that millions of children get sick daily from lack of access to clean water is a crime against humanity that the governments have created when they limit access to water and make clear water above the price people can afford. The laws relating to land use, buying and selling and farming rights are listed in detail in the Economic System of Islam that does not allow land to sit wasted in vast lots. It should be used for productive purposes, such as planting food and cannot be privately owned with the natural resources being unavailable to the public. The categories of land are discussed clearly and can be researched as follows;

3, Sawali and Diyar – State owned Lands that are private and publicly owned.

5, Farmer owned Land that is used for employing people to produce food sources.

6, Poor Farmers that till the land themselves.

These various land categories had different taxation brackets in the form of Kharaj and Ushr and laws relating to the forfeiting of land that would be taken from owners if condition of Sharia were not met. These rules above are just a small fraction of the immense mercy of Allah (swt) to give humanity a means to solve the problem of waste and unfair distribution of wealth. Umar Ibn al-Khattab was a master and great role model in implementing this system completely in his time. He organized caravans of food to Egypt and Abyssinia during the great famines in their time. There was no such idea that people would be allowed to starve to death. This shows that modern technology is meaningless without correct political will and a divine perfect system as ordained in Quran and Sunnah. وَلَقَدْ كَرَّمْنَا بَنِي آدَمَ وَحَمَلْنَاهُمْ فِي الْبَرِّ وَالْبَحْرِ وَرَزَقْنَاهُم مِّنَ الطَّيِّبَاتِ وَفَضَّلْنَاهُمْ عَلَى كَثِيرٍ مِّمَّنْ خَلَقْنَا تَفْضِيلاً “We have honored the children of Adam and carried them by land and sea; We have provided good sustenance for them and favored them specially above many of those We have created” [17:70].

The idea that over population causes poverty is a political lie to enforce the sick Capitalist agenda in our lands so that we are weakened by their false food programs that put our citizens in debt and enforce family planning on our women so they have less children. The global food giants controlling GMO seeds and sales of harvested crops are the real entity to blame for why people are starving in the world.

We pray to Allah (swt) that we are soon witnessing the end of this man made system of abuse of power and greed where the poor and weak are exploited and neglected. We call for all Muslims to rise up and seek the knowledge of the greatness of Islam and the correct system that will lead humanity out of the darkness and into the light of true justice and security. Allah (swt) has promised his believers a great reward for working in His (swt) cause and in the manner of the Prophet ﷺ as it is indeed a clear command to call mankind to submit to the system of Allah (swt) that can only be released with the true leader of Islam, the Khalifah unifying us in this duty.

“This (Qur’aan) is a Message for mankind (and a clear proof against them), in order that they may be warned thereby, and that they may know that He is the only One Ilaah (God — Allah) — (none has the right to be worshipped but Allah) — and that men of understanding may take heed” [Ibrahim 14:52]